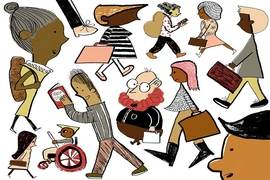 When people work in socially homogeneous groups, they overestimate their own contributions to the group’s success, according to a new study co-authored by an MIT scholar. In fact, in some cases such “self-serving bias” occurs to a degree about five times as great in homogeneous groups as in ethnically diverse groups.

Such results raise a larger point, suggests Evan Apfelbaum, the W. Maurice Young Assistant Professor of Organization Studies at the MIT Sloan School of Management, and the lead author of the new study: Researchers have often used homogeneous social groups as a “baseline” to see what effects social diversity can have — in the workplace, organizations, schools, and even markets. And yet, he contends, there are good reasons to think that such an approach fails to fully capture the social dynamics in play.

“Both diversity and homogeneity have the ability to affect how people think or make decisions,” Apfelbaum says. But all too often, he contends, “We’re really only considering that [diversity] could make a difference,” says Apfelbaum.

Apfelbaum drives home this point in a new article, “Rethinking the Baseline in Diversity Research,” published in the journal Perspectives on Psychological Science. Apfelbaum and his co-authors — Katherine Phillips of Columbia University and Jennifer Richeson of Northwestern University — believe there are two reasons to consider new approaches to diversity studies.

For one thing, by certain objective measures, homogeneous groups sometimes produce effects on their members that are more anomalous than the effects that diverse groups produce — such as Apfelbaum found in his study on self-serving bias and group dynamics.

More broadly, people may incorrectly assume that “homogeneity and diversity are just two sides of the same coin,” Apfelbaum says. However, he adds, that is not necessarily the case. Some studies reveal, for instance, that “how people act or think toward people who are similar to them tends to be independent of how they act and think about people who are different than them,” Apfelbaum says. Being a member of either a homogenous or a diverse group may produce qualitatively different effects on people, not just different degrees of the same effect.

The costs of homogeneity

In recent years, a large literature has developed in many subfields of the social sciences and management on the effects of diversity in ethnic, gender, or other terms. Some of these studies have concluded that more diverse teams are better at problem-solving or other group activities, while others have concluded that diversity can bring greater social tension. “It can be a confusing literature,” Apfelbaum says.

But most studies, Apfelbaum and his co-authors say, follow a methodological pattern in which the activities of diverse groups are compared in a straightforward fashion to those of more homogenous “control” groups. For instance, out of 240 published research articles on diversity analyzed for this paper, 205 “interpreted their result as the effect of diversity alone.”

Apfelbaum, Phillips, and Richeson suggest that this imposes unnecessary norms on the study of the topic.

Apfelbaum and his colleagues worked around the idea of homogenous groups as a baseline by using multiple control groups. Small online teams were asked to collaborate on producing answers to fact-based quizzes, with Caucasian participants randomly placed into four scenarios: Some were told that they were in ethnically homogenous teams; some were told that they were in ethnically diverse groups with blacks and Asians; some were told nothing about the ethnic makeup of their teams; and some described their own ethnicity, but received no return information. The first group of people produced the outlier result.

In this way, the researchers tested not just how people interact, but how they act individually when homogeneity and diversity are assumed to be relevant facts.

As it turns out, “There don’t even need to be people interacting in a homogenous environment” for homogeneity and diversity to be relevant, Apfelbaum says. “It suggests that there may be costs to homogeneity, which means diversity is important at a systemwide level. … If your goal as a manager is to be accurate and objective, then homogeneity appears to be much more of the anomalous setting in terms of producing that.”

The source of groupthink?

In the paper, Apfelbaum, Phillips, and Richeson survey past literature and raise the possibility that homogeneity may be one underlying cause of “groupthink,” in which people fall into an unwarranted consensus.

“It may be that part of what is driving these classic cases of groupthink is having people who are similar to one another,” Apfelbaum says.

Other scholars who have read the paper say it presents a useful reframing of diversity discussions. Samuel Sommers, an associate professor of psychology at Tufts University, calls the paper “very interesting work” that “makes the convincing argument that homogeneity has effects, too, and we should be studying and debating those as well.”

Apfelbaum is working on further experiments aimed at isolating the effects of both homogeneity and diversity. One study looks at people’s activities in financial markets, examining how accurately people price assets in markets that are ethnically diverse or homogenous.

“Being with similar people serves a very basic psychological need to belong and feel comfortable,” Apfelbaum observes. “We’re not arguing there’s no value in that. We’re arguing there is a trade-off with that. The social settings that make us feel good are not necessarily the ones that produce accurate judgments.”

In a piece for The Washington Post, Gregory Rodriguez highlights new MIT research on diversity. “The authors concluded that homogenous groups ‘were actually further than diverse groups from an objective index of accuracy,’” Rodriguez writes.