Michael Sipser named dean of the School of Science 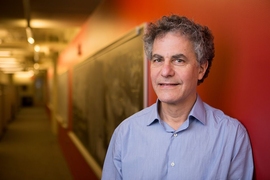 Michael Sipser, the Barton L. Weller Professor of Mathematics and head of the Department of Mathematics since 2004, has been named dean of the School of Science.

Sipser has served as the school’s interim dean since December, when he was chosen to replace Marc Kastner, the Donner Professor of Physics; in November, President Barack Obama announced his intention to nominate Kastner to head the Department of Energy’s Office of Science.

“In 10 years as head of MIT’s Department of Mathematics, Mike Sipser sustained its extraordinary stature while building a warm sense of community,” MIT President L. Rafael Reif says. “His integrity, fairness, and patience will serve him very well in the role of dean. And as the School of Science faces difficult trends in federal funding, I believe Mike’s gift for explaining complex scientific concepts will be a tremendous asset in Washington.”

Sipser is a leading theoretical computer scientist and a member of MIT’s Computer Science and Artificial Intelligence Laboratory.

“Our community of faculty, students, and staff in the School of Science is extraordinary, and I’m honored to serve our people as dean,” Sipser says. “I look forward to working with the president and provost to maintain and expand our excellence in research and education, as well as to cultivate the spirits of wonder and play that have long been features of the MIT experience, so that MIT remains a place where brilliant and far-reaching discoveries are made.”

Under Sipser’s leadership, the Department of Mathematics has launched several successful fundraising efforts, securing funds for the renovation of Building 2, for endowed chairs, and for fellowships; thanks to these efforts, the department now provides fellowships to all first-year graduate students. During the same period, the department has seen a 64 percent increase in the number of undergraduate majors, from 236 in the 2003-04 academic year to 386 this year (including students who choose mathematics as a second major).

Sipser was also instrumental in bringing the Advantage Testing Foundation’s Math Prize for Girls, an annual math competition for high school girls, to MIT’s campus, where it has been held each fall since 2011.

During his tenure as interim dean, Sipser has already proven himself a thoughtful and deliberate leader, according to Provost Martin Schmidt.

Sipser was chosen from a field of candidates identified by a faculty advisory committee chaired by Rebecca Saxe, an associate professor in the Department of Brain and Cognitive Sciences. The committee also included representatives of each of the other departments in the School of Science — math, chemistry, physics, biology, and Earth, atmospheric and planetary sciences.

Sipser says he looks forward to learning more about each of the school’s departments and continuing the community-building efforts he spearheaded in the math department. “The people in the School of Science are wonderful,” he says. “They are extraordinarily devoted to science and to MIT, and their research is amazing.”

Sipser is a fellow of the American Academy of Arts and Sciences. He authored the widely used textbook “Introduction to the Theory of Computation,” first published in 1996 and now in its third edition. Sipser received the MIT Graduate Student Council Teaching Award in 1984, 1989, and 1991, and the School of Science Student Advising Award in 2003.

Sipser lives in Cambridge with his wife, Ina, and has two children: a daughter, Rachel, who recently graduated from New York University, and a son, Aaron, who is a high school junior.

Letter to MIT community announcing the new dean of science