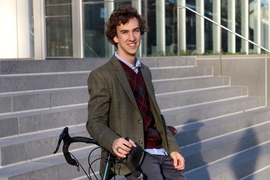 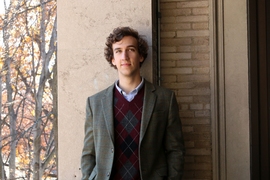 MIT senior Spencer Wilson says his family’s porch in rural southern Georgia was where he and his parents would often sit and “pull random ideas, and put them together into something new.”

His mother, an entrepreneur, was always thinking up new ventures, while his father, an architect and carpenter, designed functional sculptures and furniture. The family often puzzled over problems together.

Wilson would then head to his father’s backyard wood and metal shop, where he would attempt to hammer some of the ideas into material form.

In fact, Wilson spent a good part of his teens either on the porch or in the shop, focused on a single project: the restoration of a 1967 Volkswagen Microbus.

He encountered his first VW bus on a middle-school trip to Washington, D.C. “I had never seen a car like that before,” Wilson recalls. Upon returning home, he started to cast around for a Microbus of his own.

“I was hardheaded, and we had a dialup computer, and I spent many hours looking for one,” Wilson says.

His parents eventually acquired an old, rusted model, which Wilson named “Gus the Bus.” For the next six years, he worked with his father and grandfather to overhaul the bus, stripping down and restoring virtually every part of the vehicle.

Next summer, Wilson hopes to take the refurbished bus with him to England: He is one of 31 students from the United States this year to win a Marshall Scholarship — a prestigious fellowship that supports two years of study in the United Kingdom. Wilson will attend Cambridge University, where he plans to study advanced structures and applied mathematics.

He anticipates the experience will be reminiscent of his time on the family porch, hashing out ideas and seeing where they lead. He’s been able to cultivate that same inventive spirit, he says, during his time at MIT.

“I’m looking forward to doing the Marshall, because I’ll have complete freedom to figure out what I want to do, and do it,” Wilson says. “Boots on the ground, I get to just go. And MIT has taught me how to have freedom, and actually get things done with that amount of freedom.”

While restoring a bus from start to finish gave Wilson a solid foundation in how every part worked together, he knew less about why it all worked. As a mechanical engineering major at MIT, he quickly built up his understanding of mechanics, materials, and fluid dynamics.

“I understood how a carburetor works; it mixes fluid with air — but why? What’s actually happening in there?” Wilson says. “When I took 2.005 [Thermo-Fluids Engineering], I learned that this is the size droplet you need to have the right amount of combustion.”

Wilson sought out opportunities to apply such fundamental lessons to unique and challenging problems. As a sophomore, he took on a rare internship at Otherlab, a California startup founded by MIT alumnus Saul Griffith SM ’01, PhD ’04 that, according to its website, employs “mischievous scientists and practical dreamers.”

One “toy” he helped to prototype was a conformable gas tank modeled after the human intestine. The concept involved sausage-like tubes, filled with natural gas, and folded in such a way as to reduce the tanks’ overall volume — a design that could make natural gas vehicles competitive with gasoline vehicles.

Wilson found that same creative thinking while working at MIT’s Center for Bits and Atoms, with its director Neil Gershenfeld. The center is currently focused on developing machines, such as 3-D printers, that make other objects. Wilson worked with colleagues to come up with a way to build temporary disaster-relief structures, on the spot.

“Imagine a robot building a levee or a house for you, in a few minutes,” Wilson says. “How do we make the parts themselves, and what geometry do they have to be in?”

Wilson was granted a provisional patent related to the work, on a technique used in digital material production.

“How can you put a bridge in your backpack? Or maybe you want a quarantine station on the spot,” Wilson says. “Let’s figure out a structure that can roll up really small, but can exist in another state where you can unfurl it and it’s equally stiff. That’s an example of what I want to figure out.”

An eye for film

While Wilson is a self-proclaimed tinkerer, he also has an eye for filmmaking. He remembers going around the house with a Fisher Price audio recorder when he was young, interviewing his parents about anything that came to mind. Later, his mother upgraded him to a VHS camcorder, and he and his friends made films, recruiting neighborhood pets as cast members.

It wasn’t until Wilson took a short documentary course at MIT, taught by associate professor of writing and digital media Vivek Bald, that he realized he had a real interest in filmmaking. For that course, Wilson made a short film featuring MIT Facilities staffers, following them as they went about their overnight shifts.

“At night, a building has this feeling of being almost alive,” he says of the experience.

In January, during Independent Activities Period, Wilson will head to India, where he will film manufacturing of the Leveraged Freedom Chair, a rough-terrain wheelchair designed by assistant professor of mechanical engineering Amos Winter. Wilson hopes to document MIT students’ work in helping rural communities manufacture the wheelchair — and to capture another side of the process.

“Apparently people will work for a week, and then not work, and it’s always in flux, and there’s an untold story about how it all works, and what the culture is surrounding all that,” Wilson says.

After graduation, Wilson, an avid cyclist, plans to bicycle from Cambridge back home to Moultrie, Ga., couch-surfing and camping along the way. Before heading to the other Cambridge in the fall, he hopes to rebuild the engine of his Microbus, then take it for a road trip — destination to be determined.

As for his career path, Wilson envisions following one of two roads: either starting a company, similar to Otherlab, that takes creative approaches to engineering problems, or building a comparable lab environment within an academic setting, in the spirit of the Center for Bits and Atoms.

Whatever direction he takes, Wilson intends to stay in touch with the students and professors at MIT he has come to appreciate and respect over the years.

“I tell all the freshmen I meet: ‘Go talk to your professors — they’re amazing people,’” Wilson says. “Every time I step out of a professor’s office, I’m happier than when I walked in. I always learn something new, and I always have five new books on my reading list. The network of people you have is insane, and their doors are open.”