Caption:
Clockwise from top left, six members of MIT's Class of 2015: Tachmajal Corrales-Sanchez of Costa Rica; Spencer Wilson of Moultrie, Ga.; Hollie O'Brien of Ord, Neb.; Nicolai Forsman Ludvigsen of Norway; Tessa Green of Westport, Conn.; and Kevin Baptista of Boston, Mass.
Credits:
Photos: Dominick Reuter and Patrick Gillooly
This past April, when many accomplished high school seniors were pleasantly surprised to find themselves with multiple college acceptances, Tessa Green faced a different choice: whether to attend college at all.

Having been offered the much-publicized Thiel Fellowship — an opportunity for young entrepreneurs to forgo college in exchange for $100,000 and mentorship on developing a business idea, established by PayPal founder Peter Thiel — the 18-year-old from Westport, Conn., weighed her options, which also included a spot in MIT’s Class of 2015. For two years she had been refining her invention, a modification to a flow battery that enables it to act as a transmission system, even enlisting a lawyer who liked her idea so much that he worked pro bono to help her secure the necessary patents.

Though she called the Thiel Foundation’s offer “very tempting,” Green ultimately decided to turn down the fellowship and matriculate at MIT. “I didn’t feel like I was ready for it … I don’t feel like I have the education and experience yet to take my project and my ideas where they need to go,” she says. “MIT will give me that.”

Here in Cambridge, Green joins a group of freshmen that represent one of the MIT’s most accomplished classes yet. The Institute received 17,909 applications for the Class of 2015 and admitted 1,742 students, for an acceptance rate of 9.7 percent. Of those, some 1,126 have matriculated, a yield of 65 percent.

It was also a record year for MIT’s financial aid program: Sixty-one percent of these students will receive need-based aid from the Institute, with an average aid package of $31,665 per year. Freshmen come from nearly every state and 67 foreign countries; the most-represented U.S. state is California.

Though she hails from one of the least-represented states — Nebraska — there was never any doubt in Hollie O’Brien’s mind that she would come to MIT if given the chance. When her high school wouldn’t accommodate her requests to take advanced math and science courses via Nebraska’s distance-learning program, O’Brien simply switched schools, to Arcadia High — where she became part of a graduating class of nine students. The class size didn’t much matter, though, since she took most of her courses through videoconferencing. 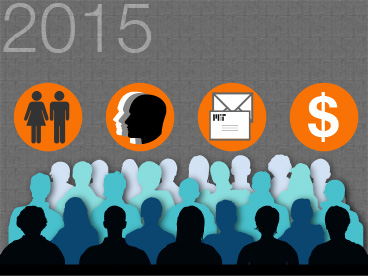 “Imagine sitting in front of a giant-screen TV and having a webcam on there, so the teacher can see you and you can see the teacher,” O’Brien says, adding that she turned in all assignments via email and her tests were supervised by an on-site proctor.

Many public schools in Nebraska are too small to offer a full range of subjects, so O’Brien used distance learning for subjects such as calculus and nuclear engineering, which she took from other schools around the state as well as the University of Nebraska at Lincoln. She spent her summers taking part in NASA programs for high school students, including a stint at the Johnson Space Center in Houston.

O’Brien has known “pretty much since second grade” that she wanted to pursue a career in aerospace engineering. “When you grow up in the middle of nowhere — in the middle of all that corn — you really want to make a difference in the world,” she says. “You look up and what’s really new and exciting is spaceflight.”

Paths to the Institute

Freshman Spencer Wilson, who comes to MIT from Moultrie, Ga., can relate to growing up in a small town. But rather than looking skyward, he gained an appreciation for manual labor in his family’s backyard workshop. “My dad used to be a carpenter. My grandpa worked with metal. My great-granddad was a blacksmith. We’re a family of builders,” he says. “My mom is a very entrepreneurial person, so that influenced me to go out and do something with it.”

One of the Wilson family’s passions was restoring old trucks. “My dad and my granddad always thought that when I came of age, we’d build a truck for me,” Wilson says. “But when I got to 12 or 13, I said, ‘I don’t want a truck, I want a Volkswagen bus.’ So my dad, somewhat reluctantly, started searching eBay for a bus.”

The 1967 Microbus they eventually bought, dubbed “Gus the Bus,” became Wilson’s pet project for the next five years. He documented his progress — everything from new axles, suspension and engine to sandblasting the exterior to painting the trim a cheerful green — on a blog that he included in his college applications. Coming to MIT, where he hopes to study engineering, he says, was a natural next step in his love of designing and building.

Meanwhile, across the Atlantic and considerably further north, Norwegian student Nicolai Forsman Ludvigsen was following in a different set of family footsteps: His older brother and his father had both served in His Majesty the King’s Guard, an army battalion dedicated to ensuring the safety of Norway’s royal family.

“I was actually not drafted because I have weak eyesight, but I called in because I wanted to serve,” Ludvigsen says. After graduating from high school, he postponed college for roughly a year to join the military division, which performs ceremonial duties along with traditional army responsibilities. “You might have heard about the guards outside Buckingham Palace, in London — it’s kind of like that,” he says.

“It was a great experience. I learned cooperation, working in a team and leadership — being responsible for people and materials,” he says. That skill set is perhaps not so distant from the one he’ll need to succeed in scientific research at MIT, where he hopes to major in physics or a branch of engineering.

Other people who ‘get it’

Compared to Ludvigsen, Boston native Kevin Baptista didn’t have to travel very far to reach campus, but his arrival has a significance of its own: He’s part of the first generation in his family to attend college. Baptista, who is Cape Verdean by heritage, joins a diverse group of classmates: The Class of 2015 is 9 percent African-American, 15 percent Hispanic, 28 percent Asian-American and 1 percent Native American. An additional 10 percent are international citizens.

“My family’s been very supportive,” says Baptista, who attended the Boston Latin School. “My parents may not really understand everything about the college process, but they’ve been there for me 100 percent.”

His interest in computer science combined with a flair for the arts — he was president of his high school’s Fashion Talent Club — makes him think he might be interested in computer programming and perhaps game design, Baptista says, but he hesitates to pigeonhole himself. Mostly, he says, he’s keeping his options open, looking forward to “taking advantage of everything this school has to offer.”

Tachmajal Corrales-Sanchez, a freshman from Costa Rica, shares Baptista’s enthusiasm. Her offer of admission was especially sweet given how close she came to missing the opportunity altogether: She didn’t even know international students could apply to American universities until just eight weeks before the deadline. “No one ever told me,” she says.

Corrales-Sanchez transferred from a Catholic high school in her rural hometown to a science-focused one in the capital city of San Jose, commuting two hours each way by bus to attend class from 7 a.m. to 5 p.m. every day. Passionate about chemistry, Corrales-Sanchez attended a chemistry Olympiad in Mexico last October, where she heard fellow participants discussing where they were planning to apply.

“Only then did I realize, ‘Wow, I could actually go to MIT,’” she says. That means when the Institute’s early action admits were already breathing a sigh of relief, Corrales-Sanchez was taking the SATs for the first time and frantically writing the first draft of her essays. But “it was totally worth it,” says Corrales-Sanchez, who hopes to complement coursework in physical chemistry with extracurricular activities in dance, poetry and the visual arts.

Ultimately, all six of these students say a big factor in their decision to attend MIT was the people, and especially their fellow classmates. Green, who chose the Institute over the Thiel Fellowship, says, “I can’t wait to spend so much time in such an intellectually charged environment — to be with other people who ‘get it.’”