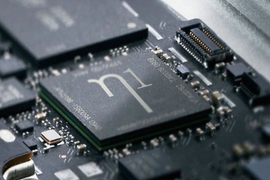 Stream video on your smartphone, or use its GPS for an hour or two, and you’ll probably see the battery drain significantly. As data rates climb and smartphones adopt more power-hungry features, battery life has become a concern. Now a technology developed by MIT spinout Eta Devices could help a phone’s battery last perhaps twice as long, and help to conserve energy in cell towers.

The primary culprit in smartphone battery drain is an inefficient power amplifier, a component that is designed to push the radio signal out through the phones’ antennas. Similar larger modules are found in wireless base stations, where they might use 10 or even 100 times the power.

Prepared to send sizeable chunks of data at any given time, the amplifiers stay at maximum voltage, eating away power — more than any other smartphone component, and about 75 percent of electricity consumption in base stations — and wasting more than half of that power as heat. This means smartphone batteries lose longevity, and base stations waste energy and lose money.

But Eta Devices has developed a chip (for smartphones) and a shoebox-size module (for base stations) — based on nearly a decade of MIT research — to essentially “switch gears” to adjust voltage supply to power amplifiers as needed, cutting the waste.

“You can look at our technology as a high-speed gearbox that, every few nanoseconds, modulates the amount of power that the power amplifier draws from the battery,” explains Joel Dawson, Eta Devices’ chief technology officer and a former associate professor of electrical engineering and computer science who co-invented the technology. “That turns out to be the key to keeping the efficiency very high.”

When trialed in a base station last year, Eta Devices’ module became the first transmitter for 4G LTE networks to achieve an average efficiency greater than 70 percent, Dawson says. “The highest number we’ve heard before that was 45 percent — and that’s probably being generous,” he says.

Backed by millions in funding, Eta Devices — co-founded by David Perreault, an MIT professor of electrical engineering, and former MIT Sloan fellow Mattias Astrom — has partnered with a large base-station manufacturer. The goal is to deploy the technology in live base stations by the end of 2015. The savings could be substantial, Dawson says, noting that a large carrier could save $100 million in annual electricity costs.

Eta Devices has also entered conversations with major manufacturers of LTE-enabled smartphones to incorporate their chips by the end of next year. Dawson says this could potentially double current smartphone battery life.

Besides battery life, Dawson adds, there are many ways the telecommunications industry can take advantage of improved efficiency. Eta Devices’ approach could lead to smaller handset batteries, for example, and even smaller handsets, since there would be less dissipating heat. The technology could also drive down operating costs for base stations in the developing world, where these stations rely on expensive diesel fuel for power.

And ultimately, it could impact the environment: If all midsized carrier networks were to replace current radio amplifiers with Eta Devices’ technology, he says, the reduction in greenhouse gases would be equivalent to taking about 5 million cars off the road. “There are so many ways to leverage high efficiency if you have it,” Dawson says.

In August, the World Economic Forum named Eta Devices the 2015 Technology Pioneer, a designation awarded previously to Dropbox, Spotify, and Twitter, to name a few.

In the mobile market

Eta Devices’ commercial success is, in part, a product of engineering ingenuity intersecting with business acumen at MIT.

In 2008, Dawson and Perreault, who directs the Power Electronics Research Group, submitted an early concept of the Eta technology — then called asymmetrical multilevel outphasing (AMO) — to an Innovation Teams (i-Teams) class that brought together MIT students from across disciplines to develop commercial products.

The AMO technology was a new transmitter architecture, where algorithms could choose from different voltages needed to transmit data in each power amplifier, and select the optimal choice for power conservation — and do so roughly 20 million times per second. This could be done on the transmitting and receiving end of data transfers.

This caught the eye of Astrom, who had come to MIT after working in the mobile industry for 10 years, “looking for the next big thing.” With help from Astrom, the professors started designing the technology for the mobile market — initially leaning toward base stations.

“At the time, I was suffering, as everyone else was, from my iPhone running out of battery at lunchtime,” Astrom says. “The iPhone was only a year old, but you could see how much data traffic would explode.”

Fleshing out a business plan from an i-Teams draft, the two professors earned a Deshpande Center for Technological Innovation grant in 2009, allowing for the first demonstration of the hardware, showing a 77 percent gain in efficiency over standard systems. (A paper detailing the technology was presented at that year’s IEEE Radio Frequency Integrated Circuits Symposium.)

“That Deshpande Center grant was big in terms of the funding and connecting us with local venture capitalists, and really helping with being in that business mindset,” Dawson says.

Eta Devices launched in 2010, with Astrom as its CEO. From there, it’s been all rapid prototyping at Eta Devices’ Cambridge and Stockholm offices, as well as gathering customer feedback.

Spinning out a company has been the best way to validate the technology — especially with novel power-electronics hardware, Dawson says. “People in our industry take ideas a lot more seriously when there’s a company behind it,” he says. “We had impressive performance at MIT, but now we have a team of professionals working on the technology full-time. The resulting performance numbers are jaw-dropping. Now people are going back and frantically studying the original MIT research papers.”

Luckily, Dawson says, several significant changes were made to those old research projects in order to develop today’s ETAdvanced — so the secret ingredients of the technology are safe. “The joke I like to tell is: When I was a professor, I was going around the world trying to give the technology away,” Dawson says, laughing. “If I had succeeded, then there’d be no business.”

Today, Eta Devices’ major advantage is that its technology is able to handle ever-increasing data bandwidths.

A few major smartphone manufacturers are now using envelope tracking (ET), which adjusts voltage to power amplifiers on the fly. But by adjusting that voltage continuously, ET efficiency falls apart for 4G/LTE and 802.11ac (WiFi) wireless standards, even up to 20 MHz bandwidth. ETAdvanced, in contrast, already accommodates ultrahigh bandwidths used by newer communication standards, such as LTE Advanced (up to 80 megahertz), and the next-generation WiFi standard (up to 160 megahertz).

Prepping for future communication standards is one thing that’s helped the company thrive, Dawson says. “As a small company, you’ll lose a fair fight with another technology — you have to have some overpowering advantage that they can’t match you on,” he says. “In introducing new hardware, you not only have to be better than the product of today, but also have to make compelling case for being future-proof.”

Pushing the envelope in power electronics

A new way to measure muscle