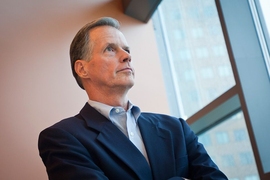 Last week, the Climate CoLab — an international effort, based at MIT’s Center for Collective Intelligence, that aims to harness the collective intelligence of people around the world to address climate change — hosted its annual conference. Participants discussed how new technology-enabled, crowd-based approaches can help to develop creative new ideas and take meaningful action on climate change. Thomas Malone, the Patrick J. McGovern Professor of Management at the MIT Sloan School of Management and principal investigator of the Climate CoLab, spoke with MIT News about the event.

Q. How is the Climate CoLab doing?

A. The Climate CoLab’s online community has more than tripled in size in the last 14 months. We now have more than 33,000 members from all over the world, including some of the world’s leading climate-change experts as well as scientists, businesspeople, students, policymakers, and many others. In our second annual Climate CoLab Conference at MIT, the winners of this year’s contests presented their ideas and discussed them with experts and others who could help put the ideas into practice.

For instance, this year’s winning ideas included proposals to (a) institute a U.S. carbon tax and use the revenue to benefit poor households, reduce corporate income taxes, and reduce the federal deficit; (b) better educate building technicians to take advantage of the often-unused energy-saving potential of sophisticated heating and cooling systems; and (c) develop radio programs to help residents of coastal areas in Tanzania, and other developing countries, adapt to changing weather and other effects of climate change.

Q. What is the Climate CoLab learning about climate change?

A. This insight is not novel, but I have become increasingly convinced that many of the key problems about climate change today are not just about the physical sciences and technology, but about the social sciences of how to change human systems. Part of our work in the Climate CoLab has involved creating a systematic taxonomy of what we humans can do about the whole problem of climate change, including not only the physical actions we could take, but also the social, political, and economic ones, too.

And we’ve been pleased by the kinds of creative ideas we’ve been getting from the Climate CoLab community. For instance, one of last year’s winning proposals was about how to create and promote the “China dream,” an aspirational lifestyle for Chinese consumers that would be more sustainable than the “American dream.” And several of this year’s winners suggested possible ways of putting a price on carbon emissions using currencies like Bitcoin that wouldn’t require government involvement.

By the way, in a recent survey of Climate CoLab members, we found evidence that winning ideas in the CoLab contests were just as likely to come from people who didn’t have previous climate-change experience as from those who did.

Q. What is the Climate CoLab learning about crowdsourcing hard problems?

A. We believe the general approach to solving problems we’ve been using in the Climate CoLab can be applied to many other kinds of hard problems, in society, business, and other areas. The core of the approach involves (a) breaking a problem down into pieces; (b) attracting a wide community of people to work on those pieces; (c) evaluating the potential solutions; and then (d) reassembling the pieces into solutions for the whole problem. None of these steps is easy, but we’ve been pleased by the breadth of insight that’s possible when this happens.

For instance, one lesson we learned is about a way of combining experts and crowds that takes advantage of the best of both. In the first year of the Climate CoLab contests, anyone could create a proposal, and anyone could vote for the proposal they liked best. The proposal that won the vote that year was one called “350 ppm or bust,” which proposed reducing all emissions in all regions of the world by almost 99 percent in 20 years.

Many people liked this proposal because it resulted in low carbon concentration in the atmosphere, but all the experts we talked to said it would be completely impossible to reduce emissions that fast unless there were some kind of global catastrophe. So in all the subsequent contests, we’ve had expert judges pick finalists that are at least feasible before we ask community members to vote on the options they like best. In this way, we take advantage of the experts’ deep knowledge about what is technically and economically feasible, and we take advantage of the crowd’s knowledge of what the public wants.

Ari Daniel of Public Radio International reports on the Climate CoLab conference, run by the MIT Center for Collective Intelligence, which brought together people from around the world to “crowdsource the problem of what to do about global climate change," says Prof. Tom Malone.

Confronting climate change from the bottom up