‘The place I needed to be’

Caption:
Madeline Salazar
Credits:
Photo: Allegra Boverman
During her free time back in high school, Madeline Salazar was often surrounded by piles of balsa wood in her house in East Los Angeles, sanding down her carefully designed bridges for engineering competitions.

“I remember being a real nerd about my bridges; I had this whole rack with all the supplies to make bridges,” she laughs. “It was a mess in my house in those days.”

Now a senior at MIT, Salazar always excelled in school: Her parents, who emigrated from Mexico in search of greater opportunity for their family, encouraged her. “Although I’m a first-generation student, my parents really valued education,” Salazar says. “From the moment we started school, there were very high expectations for me and my younger sister.” 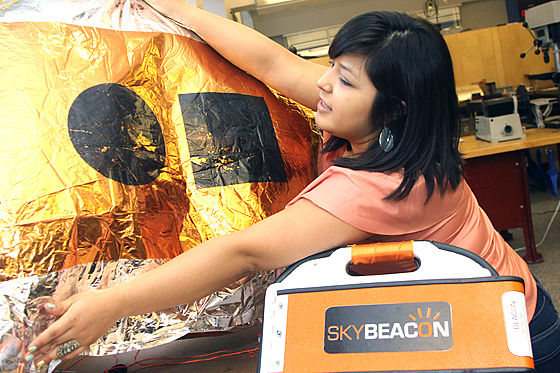 But the dropout rate in her high school was 60 percent; many of Salazar’s own friends didn’t graduate. “I want to say that I wasn’t influenced by that, but I was; it was really hard,” she says. “There are some opportunities that others may have had that I just didn’t.”

Salazar took advantage of the opportunities that were available to her. Through one program, called STEM Up, she attended an engineering conference for middle school students that inspired her to pursue engineering. “They said that structural engineers work on Disney, and I was like, ‘I want to do that!’” Salazar recounts.

Through another, the Jaime Escalante Math Program, Salazar took AP Calculus her freshman year of high school. Her teacher encouraged her to apply for the Women’s Technology Program at MIT, and the summer after her junior year, Salazar joined 19 other girls in the program.

That first experience at MIT solidified Salazar’s dream. “It just felt so good; it was the place I needed to be,” she says. “I knew I wanted to be a mechanical engineer.”

Now Salazar has internships at NASA, Boeing and the U.S. Navy under her belt; she will earn her degree in mechanical engineering this June. She has also traveled to China to help lead an outreach program similar to those that helped to inspire her when she was younger. “I’m passionate about reaching out to students who don’t know about engineering, specifically women,” Salazar says.

The summer after her freshman year, Salazar worked at NASA’s Jet Propulsion Laboratory (JPL) on a satellite called SMAP, which would measure soil moisture across the Earth’s surface. Satellites are generally powered by surface-mounted solar panels; Salazar was in charge of maximizing SMAP’s solar-cell capacity by designing their placement and deciding which solar cells to use.

Every few days, Salazar would stroll over to JPL’s Mars Science Laboratory to look through the big glass windows into the room where the Curiosity rover was under construction. “At the beginning of that summer, the Curiosity was in pieces. It was all over the place,” Salazar says. “By the end of the summer, they were doing tests; I saw it all coming together.”

A month before her internship ended, the engineers working on the rover encountered a design problem — and Salazar was asked to help design potential fixes. “That was the coolest part. I feel like I contributed to the Curiosity,” Salazar says. “Last year, when he finally landed on Mars, I wanted to cry. I saw him when he was in pieces, and now he’s taking samples from Mars! There’s no word to describe it.”

The following summer, Salazar continued her work on satellites, this time as an intern at Boeing, where she dealt with dents in paper-thin aluminum satellite panels. “For every dent, you have to reanalyze the structural integrity of the satellite: Can we pass this one up, or do we have to fix it?” Salazar explains. 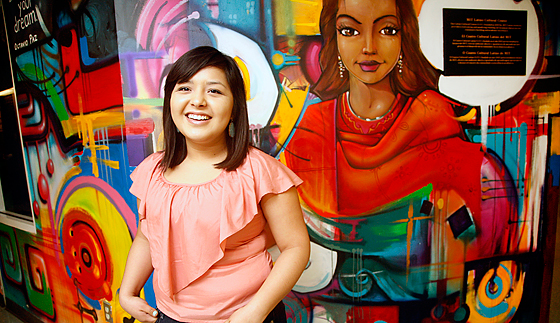 “I feel there’s a need for you to go back and help your community, the people who have gone through the same things as you,” Salazar says. Photo: Allegra Boverman

From the stars to the sea

When Salazar arrived at the U.S. Naval Sea Command in Norco, Calif., as an intern last summer, her colleagues were in the midst of developing a new piece of equipment. When data would come in from various locations in the ocean, they would spend hours reading through long lists of information. Salazar programmed a simple but efficient solution: a visual display for the data, so that the researchers could see all the information at once.

Salazar didn’t know it at the time, but she was soon to spend many more hours thinking about the sea: Last fall for 2.009 (Product Engineering Processes), she and her teammates developed an ocean rescue device that they called SkyBeacon.

A teardrop-shaped blimp adorned with an orange nautical distress flag, SkyBeacon is intended as a supplement to radio beacons and flare guns, Salazar says. After being inflated by an accompanying helium canister, the blimp would rise 50 feet above the sea’s surface.

“It’s reflective and it has LEDs, so it’s visible during the day and at night,” Salazar says. “The teardrop shape makes it so that air just passes around it, kind of like an airplane’s wing. At the tip, there are three fins for stability.”

Now Salazar is working with mechanical engineering professor Alexander Slocum on a warming blanket for infants between three and 12 months old. At such a young age, infants are susceptible to hypothermia; the transparent electric blanket would keep them warm and allow doctors and nurses to observe them.

The project brings Salazar back to her core dream, she says. “I’ve always been interested in medical issues, and I’ve always wanted to do something that really applies to someone,” she explains. Salazar plans to attend graduate school in the fall, studying the design of biomedical devices.

Salazar always has her home in East L.A. in the back of her mind. She has returned throughout her time at MIT to visit and to tutor students. “I feel there’s a need for you to go back and help your community, the people who have gone through the same things as you,” she says.

Salazar hopes one day to start a program to help students who are struggling academically. “A lot of times they’re just afraid of going to college, because they think they don’t have potential or they think they can’t afford college,” she says. “But I’m here! It took a lot of work, but I got here. And you can, too.”