From theory to practice

While long lines repel some people, they intrigue MIT PhD student Kuang Xu: After all, maybe there’s a way to reduce such lengthy waits.

A native of Suzhou, China, who enjoys rock climbing and ballroom dancing, Xu earned his bachelor’s degree in electrical engineering from the University of Illinois at Urbana-Champaign in 2009, and arrived at MIT in September of that year. Since coming to MIT, Xu has studied queuing networks that include stochastic, or random, dynamics with his advisor, John Tsitsiklis, the Clarence J. LeBel Professor of Electrical Engineering and Computer Science.

In work beginning with his master’s thesis, Xu has shown that having even a little flexibility in resources drastically improves wait times. For example, Xu says, “In call centers, you just need to train your staff so that each person speaks a few languages or knows a few disciplines. If they are mixed and matched in a smart way, then together they are very powerful.”

A few years ago, Xu saw himself becoming an engineer, but his interests have since shifted. “I started from engineering and slowly evolved into a more mathematical kind of blend,” Xu says. “I like the idea that math is a juncture between practical impact and elegant ideas. You see something that’s very conceptual, but if you know how to tweak it the right way, it will have very profound practical applications.”

Xu’s current work reflects this application of theoretical concepts to real-world problems — in his case, overcrowding in emergency rooms.

Adding some flexibility to services is just one way to improve wait times. What if there were a way to know ahead of time how many people would be arriving, and when?

“It turns out that in the flexible system we considered, if you know a little bit about the future, it brings you tremendous improvement even on top of what you already have with this flexibility,” Xu says. “I anticipate, so I vacate a resource earlier on, so I can essentially smooth out the process.” The next step was to find a setting where researchers could get that information about the future and use it effectively. 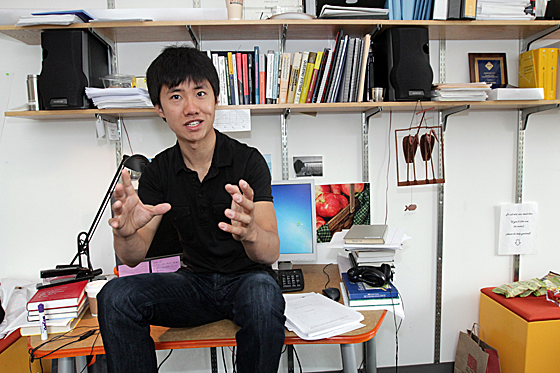 Xu was at a conference presenting his work on flexibility when he saw a presentation by Carri Chan, an assistant professor of decision, risk, and operations at Columbia University who works on improving wait times in hospitals — the kind of setting that Xu had been looking for.

“I talked to her and she said, ‘Wait a minute, this future information is not impossible to get in health-care settings,’” Xu says. “So we started looking into it.”

Tackling wait times in the ER has long been a challenge, Xu says: “In emergency rooms, you’re typically overloaded all the time. If you look at the statistics of the U.S. average waiting time, the total average time is on the order of a few hours. A lot of people leave without being seen by a doctor because they just get frustrated.”

Using predictive parameters — such as the day of the week and weather conditions — from models built by others, Xu’s algorithm improves wait times by 10 percent, which translates to approximately 40 minutes less time, on average, spent in an ER’s waiting room. Though Xu emphasizes that the work is still ongoing, his results so far have been promising.

“I could be solving a computer problem, which is still important, but the ability to possibly save some lives and improve health care by a little bit could be very profound,” Xu says.

Ever since his undergraduate days at Illinois, where he founded a research program for underclassmen that was inspired by MIT’s Undergraduate Research Opportunities Program (UROP), Xu has been passionate about education. When he heard about MITx, he immediately wanted to take part.

Currently, Xu is working with Tsitsiklis to record recitation and tutorial videos for the anticipated launch of 6.041x, a class on probability. Additionally, as a member of the MIT Council on Educational Technology and the Institute-Wide Task Force on the Future of MIT Education, Xu helps facilitate graduate student involvement in online education.

“I’m very curious about how digital technology can empower interaction and learning among people,” Xu says. “I think the digital-learning movement could be very powerful.”

After he earns his PhD, Xu hopes to combine his passions for research and teaching as a professor. “I would love to be at a top university, working with brilliant students on research and continuing to work on education,” he says.