Caption:
Hernandez staged a sit-in on the National Day of Silence to raise awareness of the issues faced by the lesbian, gay, bisexual, transgender, and/or queer (LGBTQ) community.
Credits:
Photo: Tom Gearty/MIT

Caption:
Hernandez visited the Massachusetts Supreme Judicial Court building, where he hopes to serve in the future.
Credits:
Photo courtesy of Cory Hernandez

Ask senior Cory Hernandez how MIT can improve, and he won’t hesitate to tell you. Whether the subject is the Institute’s lesbian, gay, bisexual, transgender, and/or queer (LGBTQ) community or its political science department, Hernandez is full of ideas, and is not afraid to speak them.

With a passion for American history and for social equality, Hernandez dreams of serving on the U.S. Supreme Court. As he nears the completion of a double major in political science and American studies and a master’s in political science, Hernandez looks forward to law school and then the courthouse — an ambition that first sprouted in high school.

When he was 12 years old, Hernandez came out as gay in his hometown of Mesa, Ariz. “Even then, I was outspoken,” he says. Within a few weeks, he noticed changes in the way he was treated. Ugly names, paper, gum, and pencils were thrown his way between classes, he wrote last year in an opinion piece published in The Tech, MIT’s student newspaper. Administrators at his middle school told Hernandez to cut his hair shorter, to change his behavior, to fit in better.

Now Hernandez shrugs when asked about the backlash: “Yes, the bullying was awful, but I don’t regret coming out. Ultimately, coming out helped me then start to think about a lot of other issues.”

As Hernandez navigated his way through middle and high school, he nurtured a love of history. Particularly fascinated by the American revolutionary era and U.S. law, Hernandez was also very strong in math. Once at MIT, however, it was history and law that continued to captivate him.

Hernandez devoured constitutional law and political science classes with his now-thesis advisors Chris Capozzola, an associate professor of history, and Charles Stewart III, the Kenan Sahin Distinguished Professor of Political Science. Hernandez says Capozzola — who has served as a mentor, friend, and adviser for his American studies major, thesis, and law school applications — has been the most influential person he has met since coming to MIT.

An American history class with the late Pauline Maier, the William Kenan Jr. Professor of History, also greatly influenced Hernandez. “Professor Maier was amazing; I had never had a professor like her,” he says. “She was so well-versed in the field, she had written many books about what she was teaching, and she facilitated great discussion.”

To Hernandez, history is more than just a tool to study his chosen profession. “It helps me understand the world better,” he says.

Hernandez got the chance to apply what he learned in his classes during an internship with Sen. John Kerry’s office the summer after his sophomore year. “That helped me see the legislative side of things, and I definitely want that foundation to understand the intent as well as the letter of the law,” he says. “A lot of court decisions look at what exactly Congress was debating when they passed the law, like what they were actually trying to do with it.”

Last year, Hernandez worked at the Volunteer Lawyers Project of the Boston Bar Association. “It gave me a really good chance to work not only in a legal setting directly, but specifically in pro bono work, which is something I definitely want to pursue as an attorney,” Hernandez says. 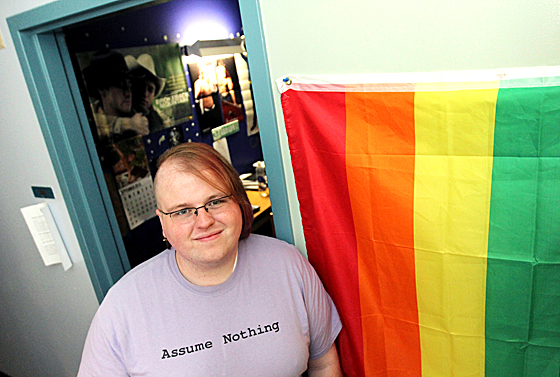 While the courtroom may one day be Hernandez’s venue for work toward a fair society, for now he focuses on MIT, where he has spearheaded numerous campaigns, student groups, and events to create a more welcoming and vibrant community.

His efforts have included the Living Pink survey, which was used to create a guide to residences at MIT for LGBTQ students, as well as a campaign that encouraged MIT faculty, staff, and students to post rainbow-themed “You Are Welcome Here” signs — now ubiquitous around the Institute — on their doors. “It really helps people feel like MIT is friendly and accepting toward them,” Hernandez says. Last year, Hernandez tackled diversity and mental health as well, helping to found a multicultural programming club and joining Active Minds, a student group focused on lifting the stigma surrounding mental health issues.

Throughout his more than three years at the Institute, Hernandez feels that he’s been able to make a difference. “Sometimes people that I’ve never met come up to me and say, ‘I’ve been here for a while, and I know what things were like a few years ago.’ They say that with the work that I’ve done, they’ve really seen a big change in the climate of acceptance here,” Hernandez says. “It’s nice to hear, even those small things.”

Hernandez’s MIT-oriented efforts also include leadership in the Undergraduate Association and the Association of Student Activities, where he serves as treasurer and an undergraduate member-at-large, respectively. “I started realizing you can actually change MIT and improve things for students, which is why I got more and more involved,” Hernandez says. “For instance, we have around 470 student groups, and it’s the student government’s job to provide resources for them, and we do it. Which I love, because MIT is really about enabling people and empowering them to do what they want to do.”