Caption:
Alexis Sablone
Credits:
Photo: Allegra Boverman
For an MIT student, Alexis Sablone has an unusual web persona. The graduate student in architecture is prominent on ESPN’s website — thanks to her accomplishments as a competitive skateboarder.

A two-time gold medalist and two-time silver medalist at the X Games, Sablone has pursued skateboarding for more than 15 years, competing in tournaments around the world. Her online presence also includes details on her triumphs at various competitions; videos of her performing tricks on her skateboard; and interviews in which she describes her desire to erase some of the gender boundaries in her chosen sport. 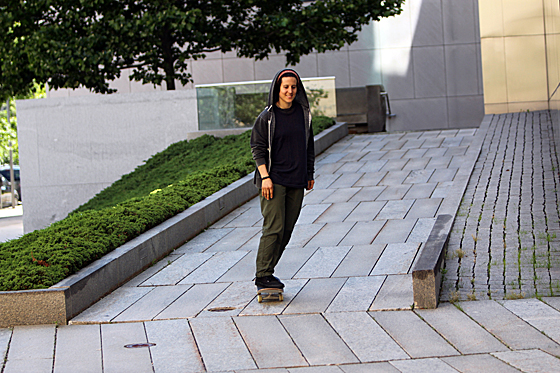 There is little mention of her interest in architecture, a field Sablone pursued as an undergraduate at Barnard College. “I was trying to find something that satisfied my dual interests in the arts and sciences,” she says, “and there was nothing else, to me, that seemed a better fit.”

Sablone’s undergraduate studies of architecture reinforced her belief that it was a good fit. “There are so many things within the broader umbrella of architecture, and I was excited by the possibilities,” she says.

Sablone is particularly interested in exploring computation and fabrication methods within architecture. “By changing what’s possible, technology starts to impact the way you approach design,” Sablone says. “It helps you become less attached to a first idea. A design starts with something you imagine but then you test your idea, change it, test some more — and your project becomes much richer in the process.”

Sablone is also interested in the design of objects that are far smaller than buildings. This past semester, she says, she got “relief from building-scale projects” in 4.110J (Design Across Scales). “I’m drawn to smaller-scale objects and projects,” Sablone says.

In this particular class, one assignment asked students “to make something that helped make something else” — piquing Sablone’s interest and allowing her to combine her interests in skateboarding and design. For this project, Sablone designed a skateboard with a removable iPhone embedded in it.

But her design provides more than just a convenient place to store an electronic device. “An iPhone has apps that collect accelerometer data, so this skateboard uses that data to produce imagery that describes physical performance” Sablone says. Used in conjunction with data-visualization software, the data collected during a routine allows skateboarders to observe the patterns and individual character of their technique, and learn from others as well.

“I love being able to see the data and take something away from it — I think that’s beautiful,” Sablone says.

Ultimately, Sablone says that she “feels more like a designer than she does a skateboarder” — even though the two interests constantly inform each other. “Skateboarding has definitely helped me see my environment in unique and creative ways,” she adds, “I am more attuned to different angles, textures and surfaces thanks to skateboarding.”

Olympian Alexis Sablone ’16 will be the new head coach for the United States women’s skateboarding team in the upcoming Olympic Games, reports Michelle Bruton for Forbes. Sablone “has one of the most decorated careers of any female street skater, with seven X games medals and a 2015 World Skateboarding Championship,” writes Bruton.