Sorting out the structure of a Parkinson’s protein 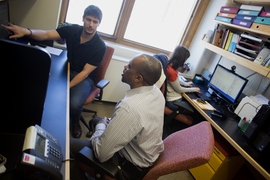 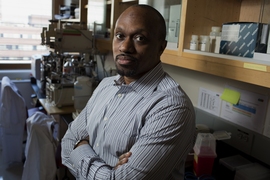 Caption:
Collin Stultz, an associate professor of electrical engineering and computer science.
Credits:
Photo: M. Scott Brauer
Clumps of proteins that accumulate in brain cells are a hallmark of neurological diseases such as dementia, Parkinson’s disease and Alzheimer’s disease. Over the past several years, there has been much controversy over the structure of one of those proteins, known as alpha synuclein.

MIT computational scientists have now modeled the structure of that protein, most commonly associated with Parkinson’s, and found that it can take on either of two proposed states — floppy or rigid. The findings suggest that forcing the protein to switch to the rigid structure, which does not aggregate, could offer a new way to treat Parkinson’s, says Collin Stultz, an associate professor of electrical engineering and computer science at MIT.

“If alpha synuclein can really adopt this ordered structure that does not aggregate, you could imagine a drug-design strategy that stabilizes these ordered structures to prevent them from aggregating,” says Stultz, who is the senior author of a paper describing the findings in a recent issue of the Journal of the American Chemical Society.

For decades, scientists have believed that alpha synuclein, which forms clumps known as Lewy bodies in brain cells and other neurons, is inherently disordered and floppy. However, in 2011 Harvard University neurologist Dennis Selkoe and colleagues reported that after carefully extracting alpha synuclein from cells, they found it to have a very well-defined, folded structure.

That surprising finding set off a scientific controversy. Some tried and failed to replicate the finding, but scientists at Brandeis University, led by Thomas Pochapsky and Gregory Petsko, also found folded (or ordered) structures in the alpha synuclein protein.

Stultz and his group decided to jump into the fray, working with Pochapsky’s lab, and developed a computer-modeling approach to predict what kind of structures the protein might take. Working with the structural data obtained by the Brandeis researchers, Stultz created a model that calculates the probabilities of many different possible structures, to determine what set of structures would best explain the experimental data.

The calculations suggest that the protein can rapidly switch among many different conformations. At any given time, about 70 percent of individual proteins will be in one of the many possible disordered states, which exist as single molecules of the alpha synuclein protein. When three or four of the proteins join together, they can assume a mix of possible rigid structures, including helices and beta strands (protein chains that can link together to form sheets).

“This paper seems to bridge the gap” between the two camps, says Trevor Creamer, an associate professor of molecular and cellular biochemistry at the University of Kentucky who was not involved in this research. Also important is the model’s prediction of new structures for the protein that experimental biologists can now look for, Creamer adds.

The MIT researchers also found that when alpha synuclein adopts an ordered structure, similar to that described by Selkoe and co-workers, the portions of the protein that tend to aggregate with other molecules are buried deep within the structure, explaining why those ordered forms do not clump together.

Stultz is now working to figure out what controls the protein’s configuration. There is some evidence that other molecules in the cell can modify alpha synuclein, forcing it to assume one conformation or another.

“If this structure really does exist, we have a new way now of potentially designing drugs that will prevent aggregation of alpha synuclein,” he says.