Caption:
Collin Stultz
Credits:
Photo: M. Scott Brauer
When Collin Stultz was 4 years old, his Jamaican parents moved their family to Brooklyn, N.Y., in search of a better life. The Stultzes wanted their children to achieve the American dream — which, to them, meant becoming a doctor or lawyer.

Stultz’s academic strength was mathematics: He won numerous awards for his talent, each of which his mother proudly saved. “My mother to this day has a folder that she keeps with any award that I won. If you went to her today, she’d take it out and dust it off and show it to you,” says Stultz, 44, now an associate professor of electrical engineering and computer science at MIT and an associate professor in the Harvard-MIT Division of Health Sciences and Technology (HST). Stultz is also a cardiologist who has appointments at the Brigham and Women’s Hospital and the West Roxbury Veterans Affairs Hospital. 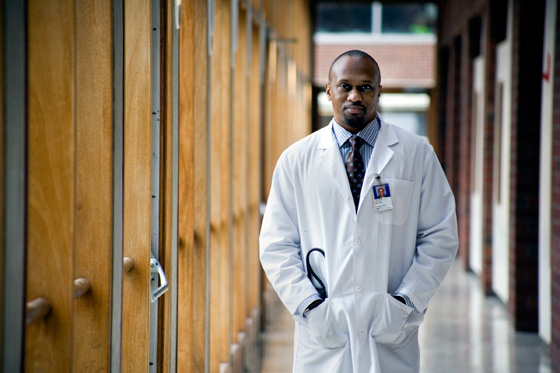 Though his parents had little formal education, they were wise and knowledgeable, Stultz says. They worked hard to give their four children the chance for a good education, eventually buying a small apartment building in Brooklyn. “They made life better for themselves,” Stultz says. “They grew up poor, and they never left the mindset of being poor. They wanted to make sure that things were different for me.”

At MIT, where he recently earned tenure, Stultz studies the physical structure of proteins involved in diseases such as Alzheimer’s. His research interests reflect his desire to help other people.

“Our investigations always start with a disease, like atherosclerosis, Alzheimer’s or Parkinson’s,” Stultz says. “What do we know about those diseases? We can break them down into the fundamental proteins and biomolecules that are involved, and then we study those and try to get insight into disease processes.”

Stultz, the youngest sibling in his family, skipped ninth grade and entered Harvard University at 17. There, he was drawn to a field called mathematical logic, and recursion theory in particular. While math was Stultz’s favorite pursuit, he also fulfilled the premedical requirements — and, believing that he could help more people as a doctor than a mathematician, ultimately enrolled at Harvard Medical School.

“I hated my first two years in med school because it was all about memorization,” Stultz says. He decided to take a year off to work in the lab of computational biologist Temple Smith at the Dana-Farber Cancer Institute. Smith put him to work using a mathematical technique known as Hidden Markov modeling to try to predict protein structures from their amino acid sequences.

“During that year, I decided this was something I really wanted to do more of,” Stultz says. He applied to Harvard’s PhD program in biophysics, where he worked with physical chemist Martin Karplus. After finishing his PhD, he returned to complete his last two years of medical school, then did an internship and residency at Brigham and Women’s Hospital.

After another three years’ training in cardiovascular medicine, followed by a postdoctoral fellowship with MIT biomedical engineer Elazer Edelman, Stultz applied for a faculty opening in HST and MIT’s Department of Electrical Engineering and Computer Science (EECS). He got the job, despite having no formal training in electrical engineering or computer science. 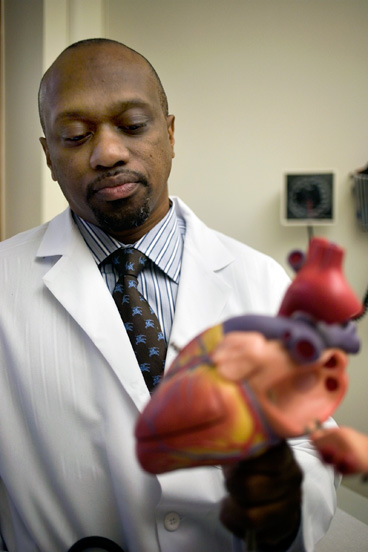 Photo: M. Scott Brauer
“I am an oddball,” Stultz says. “That’s actually one of the interesting things about the EECS department. You can take two people in the same department, and you can put them together and they speak two completely different languages. In my view, that’s a strength of the department.”

Stultz’s current research has two major branches. One, done in collaboration with John Guttag, the Dugald C. Jackson Professor of Computer Science and Engineering, uses electrocardiograms to develop algorithms that predict which heart-attack patients are most likely to survive. His other work uses computer simulations to study the structure of proteins such as collagen and the Tau protein that forms plaques in the brains of Alzheimer’s patients.

The best part of his job, Stultz says, is working with his students and postdocs. “I like them to challenge me about things they don’t understand or things they don’t agree with,” he says. “I love the scientific colloquy. Or to use a stronger word, I love the scientific battle — where you and someone else sit down and talk about an issue, maybe have a disagreement about it, but are persuaded by the data and come to some conclusion, or learn something. … That’s the stuff that keeps me coming to work.”

When not in his lab or seeing patients, Stultz is an avid and unapologetic New York Yankees fan who often goes to Fenway Park dressed in Yankees paraphernalia. Luckily for him, “every time I’ve been to Fenway Park and seen the Yankees and Red Sox, the Yankees have lost. That’s the only reason I’ve been able to make it home alive,” he laughs.