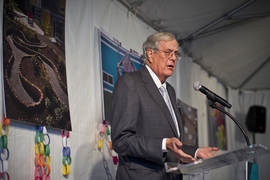 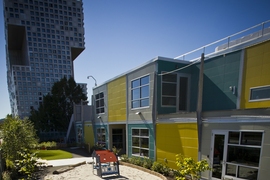 “What a joyful occasion!” MIT President L. Rafael Reif said at Friday’s dedication of the Institute’s newest child-care facility, the David H. Koch Childcare Center. Reif praised the “wonderful impact of this center on the life of our campus” — doubling MIT’s capacity to provide care for the preschool children of faculty, staff, postdocs, and graduate students.

The ceremony, held on a second-floor porch of the 14,000-square-foot modular building on Vassar Street, featured comments from members of the MIT community whose lives have already been impacted by the Institute’s on-campus childcare services.

“This project depended from start to finish on the initiative, vision, and generosity of David H. and Julia Koch,” Reif said in his introduction. “They saw the urgent need for high-quality child care to help MIT’s parents succeed in balancing demanding careers.” They responded to that need, Reif said, with “a big gift to make this center happen, and then cheered its progress every step of the way.”

That gift, Reif said, will help to “make the MIT family stronger and happier for many years to come.”

Anne McCants, a professor of history and co-chair of MIT’s Council on Family and Work, said, “If you had told me when I arrived at MIT in 1991 that we would be opening a child-care center that looked like this, it would have seemed incredible to me.”

Israel Ruiz, MIT’s executive vice president and treasurer, noted that previously, it was “harder to get admittance to child care than to the freshman class at MIT. … Now [those seeking child care] have a much better chance.”

Ruiz added that the new facility, with its innovative design and its colorful and stimulating spaces both indoors and out, will make “such a positive difference in the lives of the youngest of those admitted to MIT.”

David Mindell, the Frances and David Dibner Professor of the History of Engineering and Manufacturing, whose two daughters have attended other MIT child care facilities, said, “Child care has made the biggest difference in my life.” Looking around at the colorful new facility, he added that “MIT is a great big daycare for grownups, with a lot of construction toys.”

“Childhood experts agree that early-enrichment programs in those first few years of life give children a very large advantage,” Susan Lindquist, a professor of biology and former director of the Whitehead Institute, said. “Moms agree that nothing makes such a difference to them professionally than to know that their kids are happy and safe, and even more so that they’re enriched and nurtured.”

While she hasn’t personally used MIT’s child care facilities, Lindquist noted that she took advantage of a similar facility as a young researcher at the University of Chicago, and recalled what a difference it made to have her children so close by. “I could go over there at recess, or at lunch, or just stop by to say hello,” she said. “I felt comforted by it.”

While Lindquist noted the importance of Koch’s other major gifts to MIT — including the Koch Institute for Integrative Cancer Research — she said of his latest gift, “I can’t think of anything you could have done that would have been more substantive for the life of MIT, that will rebound for generations.”

Koch said the new facility grew out of his experience on MIT’s biology visiting committee. During a visit in 2011, he said, he and fellow committee members asked some postdocs about the most important issues they’d like to see addressed. “Several of the young mothers spoke up with enormous passion, saying they couldn’t get their children into the child care,” Koch recalled. “I said, ‘Gosh almighty, we’ve got to fix this.’”

He met with then-President Susan Hockfield to hash out the plan for the new center. “Happy mothers make happy researchers,” he said.

Koch said that despite his previous funding of MIT buildings and professorships, those gifts engendered “nothing like the enthusiasm and the positive response” for this new project. “So many people from so many laboratories and other places around the campus have expressed such enormous appreciation and gratitude,” he said.

To conclude the dedication ceremony, all of the speakers — and several of their children —lined up for a ceremonial ribbon-cutting. They used tiny safety scissors to cut sections of a paper chain, officially declaring the new center open for business — and thus, in this case, open for play.