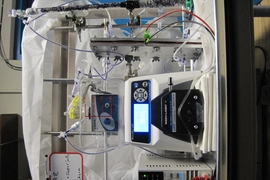 Many researchers around the world are seeking ways to “scrub” carbon dioxide (CO2) from the emissions of fossil-fuel power plants as a way of curbing the gas that is considered most responsible for global climate change. But most such systems rely on complex plumbing to divert the steam used to drive the turbines that generate power in these plants, and such systems are not practical as retrofits to existing plants.

Now, researchers at MIT have come up with a scrubbing system that requires no steam connection, can operate at lower temperatures, and would essentially be a “plug-and-play” solution that could be added relatively easily to any existing power plant.

The new electrochemical system is described in a paper just published online in the journal Energy and Environmental Science, and written by doctoral student Michael Stern, chemical engineering professor T. Alan Hatton and two others.

The system is a variation on a well-studied technology that uses chemical compounds called amines, which bind with CO2 in the plant’s emission stream and can then release the gas when heated in a separate chamber. But the conventional process requires that almost half of the power plant’s low-pressure steam be diverted to provide the heat needed to force the amines to release the gas. That massive diversion would require such extensive changes to existing power plants that it is not considered economically feasible as a retrofit.

In the new system, an electrochemical process replaces the steam-based separation of amines and CO2. This system only requires electricity, so it can easily be added to an existing plant.

The system uses a solution of amines, injected at the top of an absorption column in which the effluent gases are rising from below. The amines bind with CO2 in the emissions stream and are collected in liquid form at the bottom of the column. Then, they are processed electrochemically, using a metal electrode to force the release of the CO2; the original amine molecules are then regenerated and reused.

As with the conventional thermal-amine scrubber systems, this technology should be capable of removing 90 percent of CO2 from a plant’s emissions, the researchers say. But while the conventional CO2-capture process uses about 40 percent of a plant’s power output, the new system would consume only about 25 percent of the power, making it more attractive.

In addition, while steam-based systems must operate continuously, the all-electric system can be dialed back during peak demand, providing greater operational flexibility, Stern says. “Our system is something you just plug in, so you can quickly turn it down when you have a high cost or high need for electricity,” he says.

Another advantage is that this process produces CO2 under pressure, which is required to inject the gas into underground reservoirs for long-term disposal. Other systems require a separate compressor to pressurize the gas, creating further complexity and inefficiency.

The chemicals themselves — mostly small polyamines — are widely used and easily available industrial materials, says Hatton, the Ralph Landau Professor of Chemical Engineering Practice. Further research will examine which of several such compounds works best in the proposed system.

So far, the research team, which also includes former MIT research scientist Fritz Simeon and Howard Herzog, a senior research engineer at the MIT Energy Initiative, has done mathematical modeling and a small-scale laboratory test of the system. Next, they hope to move on to larger-scale tests to prove the system’s performance. They say it could take five to 10 years for the system to be developed to the point of widespread commercialization.

David Heldebrant, a senior research scientist in materials chemistry at the Pacific Northwest National Laboratory, who was not involved in this work, says, “The electrochemical approach to CO2 capture has been previously proposed by other groups, but with varying degrees of success. What separates Hatton and his team from the field is that they have demonstrated the first comprehensive study of the thermodynamic and engineering principles that are needed to project the performance of electrochemical systems.”

Heldebrant adds: “As with any process, the main questions and uncertainty pertain to the costs and lifetime of the system.” But he says this research “is of the highest quality,” and the team has “done a great job identifying the critical science and engineering for such a system.”

Because it does not rely on steam from a boiler, this system could also be used for other applications that do not involve steam — such as cement factories, which are among the leading producers of CO2 emissions, Stern says. It could also be used to curb emissions from steel or aluminum plants.

It could also be useful in other CO2 removal, Hatton says, such as in submarines or spacecraft, where carbon dioxide can accumulate to levels that could endanger human health, and must be continually removed.

The work was supported by Siemens AG and by the U.S. Department of Energy through the Advanced Research Projects Agency for Energy.

Martin LaMonica writes for The Boston Globe about how MIT researchers are creating a commercial prototype of a carbon capture device. Graduate student Aly Eltayeb explains that carbon capture could be useful in cutting carbon emissions, “especially if you can do something with that CO2 and stop treating it as a waste — and treat it as a valuable product.”