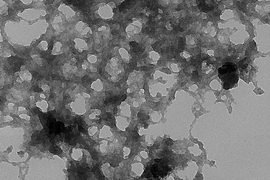 ↓ Download Image
Caption: Disordered materials, such as this slice of amorphous silicon (a material often used to make solar cells), have been very difficult to model mathematically. New mathematical methods developed at MIT should help with such modeling.
Credits: Image: wikimedia commons/Asad856

Caption:
Disordered materials, such as this slice of amorphous silicon (a material often used to make solar cells), have been very difficult to model mathematically. New mathematical methods developed at MIT should help with such modeling.
Credits:
Image: wikimedia commons/Asad856
A multidisciplinary team of researchers at MIT and in Spain has found a new mathematical approach to simulating the electronic behavior of noncrystalline materials, which may eventually play an important part in new devices including solar cells, organic LED lights and printable, flexible electronic circuits.

The new method uses a mathematical technique that has not previously been applied in physics or chemistry. Even though the method uses approximations rather than exact solutions, the resulting predictions turn out to match the actual electronic properties of noncrystalline materials with great precision, the researchers say. The research is being reported in the journal Physical Review Letters, published June 29.

Jiahao Chen, a postdoc in MIT’s Department of Chemistry and lead author of the report, says that finding this novel approach to simulating the electronic properties of “disordered materials” — those that lack an orderly crystal structure — involved a team of physicists, chemists, mathematicians at MIT and a computer scientist at the Universidad Autónoma de Madrid. The work was funded by a grant from the National Science Foundation aimed specifically at fostering interdisciplinary research.

The project used a mathematical concept known as free probability applied to random matrices — previously considered an abstraction with no known real-world applications — that the team found could be used as a step toward solving difficult problems in physics and chemistry. “Random-matrix theory allows us to understand how disorder in a material affects its electrical properties,” Chen says.

Typically, figuring out the electronic properties of materials from first principles requires calculating certain properties of matrices — arrays of numbers arranged in columns and rows. The numbers in the matrix represent the energies of electrons and the interactions between electrons, which arise from the way molecules are arranged in the material.

To determine how physical changes, such as shifting temperatures or adding impurities, will affect such materials would normally require varying each number in the matrix, and then calculating how this changes the properties of the matrix. With disordered materials, where the values of the numbers in the matrix are not precisely known to begin with, this is a very difficult mathematical problem to solve. But, Chen explains, “Random-matrix theory gives a way to short-circuit all that,” using a probability distribution instead of deriving all the precise values.

The new method makes it possible to translate basic information about the amount of disorder in the molecular structure of a material — that is, just how messy its molecules are — into a prediction of its electrical properties.

“There is a lot of interest in how organic semiconductors can be used to make solar cells” as a possible lower-cost alternative to silicon solar cells, Chen says. In some types of these devices, “all the molecules, instead of being perfectly ordered, are all jumbled up.” These disordered materials are very difficult to model mathematically, but this new method could be a useful step in that direction, he says.

Essentially, what the method developed by Chen and his colleagues does is take a matrix problem that is too complex to solve easily by traditional mathematical methods and “approximates it with a combination of two matrices whose properties can be calculated easily,” thus sidestepping the complex calculations that would be required to solve the original problem, he explains.

Amazingly, the researchers found that their method, although it yields an approximation instead of the real solution, turns out to be highly accurate. When the approximation is plotted on a graph along with the exact solution, “you couldn’t tell the difference with the naked eye,” Chen says.

While mathematicians have used such methods in the abstract, “to our knowledge, this is the first application of this theory to chemistry,” Chen says. “It’s been very much in the domain of pure math, but we’re starting to find real applications. It’s exciting for the mathematicians as well.”

The incredible accuracy of the method, which uses a technique called free convolution, led the team to investigate why it was so accurate, which has led in turn to new mathematical discoveries in free probability theory. The method derived for estimating the amount of deviation between the precise calculation and the approximation is new, Chen says, “driven by our questions” for the mathematicians on the team. “It’s a happy accident that it worked out as well as it did,” he adds.

“Our results are a promising first step toward highly accurate solutions of much more sophisticated models,” Chen says. Ultimately, an extension of such methods could lead to “reducing the overall cost of computational modeling of next-generation solar materials and devices.”

David Leitner, a professor of theoretical and biophysical chemistry and chemical physics at the University of Nevada at Reno who was not involved in this work, says the potential practical impact of this research “is great, given the challenge faced in calculating the electronic structure of disordered materials and their practical importance.” He adds that the key test will be to see if this approach can be extended beyond the one-dimensional systems described in this paper to systems more applicable to actual devices. “Extension to higher dimensions is critical in assessing the work’s significance,” he says.

Such calculations “remain a big challenge,” Leitner says, and further work on this approach to the problem “could be very fruitful.”