Ice and organic material may have been carried to the planet by passing comets.
Jennifer Chu, MIT News Office
Publication Date:

Caption:
The water and organic compounds are spread over a wide geographic region, and a small fraction of both compounds migrate to the poles where they can become cold-trapped as ices.
Credits:
NASA/UCLA/Johns Hopkins University Applied Physics Laboratory/Carnegie Institution of Washington

Caption:
The ice retreats further to a stable long-term configuration. In the coldest areas, water ice remains on the surface. In the warmer areas, the ice is covered by an ice-free surface layer that is rich in organic impurities that have been darkened by exposure to Mercury's space environment.
Credits:
NASA/UCLA/Johns Hopkins University Applied Physics Laboratory/Carnegie Institution of Washington
Mercury, the smallest and innermost planet in our solar system, revolves around the sun in a mere 88 days, making a tight orbit that keeps the planet incredibly toasty. Surface temperatures on Mercury can reach a blistering 800 degrees Fahrenheit — hot enough to liquefy lead.

Now researchers from NASA, MIT, the University of California at Los Angeles and elsewhere have discovered evidence that the scorching planet may harbor pockets of water ice, along with organic material, in several permanently shadowed craters near Mercury’s north pole.

The surprising discovery suggests to scientists that both ice and organic material, such as carbon, may have been deposited on Mercury’s surface by impacts from comets or asteroids. Over time, this volatile material could then have migrated to the planet’s poles.

“We thought the most exciting finding could be that this really was water ice,” says Maria Zuber, the E.A. Griswold Professor of Geophysics in MIT’s Department of Earth, Atmospheric and Planetary Sciences, and a member of the research team. “But the identification of darker, insulating material that may indicate complex organics makes the story even more thrilling.”

Zuber and her colleagues published their results this week in the journal Science.

The possibility that water ice might exist on Mercury is not new: In the 1990s, radar observations detected bright regions near Mercury’s poles that scientists believed could be signs of either water ice or a rough planetary surface. However, the evidence was inconclusive for either scenario.

To get a clearer picture of Mercury’s polar regions, Zuber and her colleagues analyzed observations taken by NASA’s MESSENGER (MErcury Surface, Space ENvironment, GEochemistry and Ranging) mission, a probe that has been orbiting the planet and mapping its topography since April 2011. 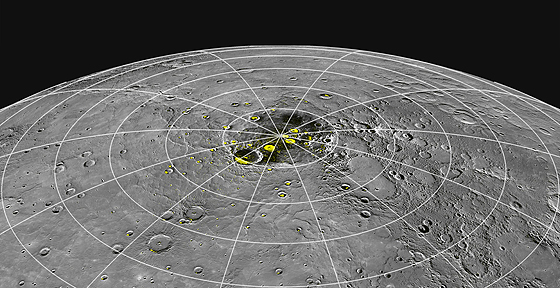 Mapping the planet’s surface is a challenging task, as the craft must weather the sun’s intense radiation, which can “play havoc with electronics,” Zuber says. What’s more, the probe moves from pole to pole in an elliptical orbit, making for an extremely tricky mapping mission, both dynamically and thermally. Despite these challenges, MESSENGER’s onboard laser altimeter has amassed more than 10 million laser pulses that have been used to map topography and measure the near-infrared reflectance of the surface.

Last year, researchers analyzed the probe’s topographic observations and created a high-resolution map of Mercury; they then overlaid previous radar observations. They found that the bright regions detected in radar lined up with permanently shadowed craters at the planet’s north pole — regions that never see the sun, and which are potentially ideal places for ice to survive. This finding was one more piece of evidence that Mercury might harbor water ice.

In this latest analysis of MESSENGER’s observations, scientists believe they have found conclusive evidence for water ice on Mercury, although the data was at first puzzling.

The team found that the probe’s reflectance measurements, taken via laser altimetry, matched up well with previously mapped radar-bright regions in Mercury’s high northern latitudes. Two craters in particular were bright, both in radar and at laser wavelengths, indicating the possible presence of reflective ice.
However, just south of these craters, others appeared dark with laser altimetry, but bright in radar.

The observations “threw us off track for a long time,” Zuber says, until another team member, David Paige of UCLA, developed a thermal model of the planet. Using MESSENGER observations of Mercury’s topography, reflectance and rotational characteristics, the model simulated the sun’s illumination of the planet, enabling precise determination of Mercury’s temperature at and below the surface.

Results indicated that the unusually bright deposits corresponded to regions where water ice was stable at the surface; in dark regions, ice was stable within a meter of the surface. The dark insulating material is consistent with complex organics that would already be dark but may have been darkened further by the intense radiation at Mercury’s surface.

In addition, MESSENGER’s neutron spectrometer detected elemental hydrogen in the vicinity of Mercury’s north pole. The combination of the compositional, spectral and geometric observations and the thermal models provided a strong, self-consistent explanation for the unusual radar backscatter observations.

Paul Lucey, a professor of geophysics and planetology at the University of Hawaii, points out that MESSENGER has also revealed a number of regions where surfaces were much darker than in previous radar measurements. Lucey interprets these results as possible evidence of receding ice on Mercury’s surface.

“This suggests that in the past, ice was more extensive on Mercury, and retreated to its current state,” says Lucey, who was not involved in the research. “Even Mercury experiences global warming.”

MESSENGER will continue to orbit Mercury, and Zuber says future data may reveal information beyond the planet’s surface. “There are still some really good questions to answer about the interior,” Zuber says. “I’ll tell you, we’re not done.”

A comprehensive map of the SARS-CoV-2 genome