Probing the mysteries of cracks and stresses 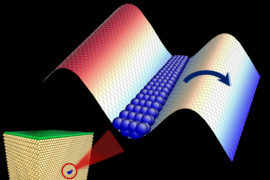 ↓ Download Image
Caption: A dislocation in a crystal lattice, a disconnected region in its structure (represented by the array of atoms shown in blue) can separate from the rest of the lattice at a rate determined by the potential energy of the system, represented by the wavy surface. To the left, the higher potential energy (shown in red) prevents the defect from moving in that direction, but to the lower right (shown in blue) the defect can glide toward a lower-energy state, if it first overcomes the higher-energy hump. Once over that hump, it can move rapidly and continuously — a condition called flow stress.
Credits: Image courtesy of Yue Fan and Bilge Yildiz

Caption:
A dislocation in a crystal lattice, a disconnected region in its structure (represented by the array of atoms shown in blue) can separate from the rest of the lattice at a rate determined by the potential energy of the system, represented by the wavy surface. To the left, the higher potential energy (shown in red) prevents the defect from moving in that direction, but to the lower right (shown in blue) the defect can glide toward a lower-energy state, if it first overcomes the higher-energy hump. Once over that hump, it can move rapidly and continuously — a condition called flow stress.
Credits:
Image courtesy of Yue Fan and Bilge Yildiz
Diving into a pool from a few feet up allows you to enter the water smoothly and painlessly, but jumping from a bridge can lead to a fatal impact. The water is the same in each case, so why is the effect of hitting its surface so different?

This seemingly basic question is at the heart of complex research by a team in MIT’s Department of Nuclear Science and Engineering (NSE) that studied how materials react to stresses, including impacts. The findings could ultimately help explain phenomena as varied as the breakdown of concrete under sudden stress and the effects of corrosion on various metal surfaces.

Using a combination of computer modeling and experimental tests, the researchers studied one specific type of stress — in a defect called a screw dislocation — in one kind of material, an iron crystal lattice. But the underlying explanation, the researchers say, may have broad implications for many kinds of stresses in many different materials.

The research, carried out by doctoral student Yue Fan, associate professor Bilge Yildiz, and professor emeritus Sidney Yip, is being published this week in the journal Physical Review Letters.

Essentially, the team analyzed how the strength of a material can increase quite abruptly as the rate of strain applied to the material increases. This transition in the rate at which a material cracks or bends, called a flow-stress upturn, has been observed experimentally for many years, but its underlying mechanism has never been fully explained, the researchers say.

“The formulation is not specific to this particular defect,” Yildiz explains. Rather, she and her colleagues have figured out what they believe is a set of general principles. “We have proven that it works in this system,” she says.

“There are implications that go beyond dislocations, beyond even crystals,” Yip adds. But before extending the work — something the team is working on now — the researchers had to prove the principle by applying it to a specific case, in this case the screw dislocation in iron. While other researchers have analyzed behaviors associated with particular kinds of defects in specific materials, with these new general principles, “all of a sudden we have an explanation for their data that does not require such specific assumptions,” Yip says.

Flow-stress upturn “is an important phenomenon in materials,” Fan says, explaining how they bend and crack in a process called plastic deformation. “It’s common in all metals,” he says, as well as in many other materials.

But the way that deformation varies, depending on the forces being applied, Fan says, is similar to the way the surface of water in a pool can part gently when a diver hits the surface at a certain rate of speed, but doesn’t have time to part and behaves like a solid when the impact is too rapid, as in a jump from a great height.

The key is something called “strain localization,” Yip says — that is, the way an impact or other stress is confined to a small initial location, and how rapidly the applied forces can then spread beyond that point. To understand that fully, he says, the team had to analyze how the atoms and molecules move to produce this behavior.

The team found that, in addition to the rate at which the strain is applied, the effect depends critically — and in a highly predictable way — on the temperature of the material. “People think they’re independent,” Fan says, but it turns out the effects of strain rate and temperature are strongly related.

The effects are quite dramatic, Yildiz says: The rate of change taking place within the material can suddenly change by orders of magnitude, transforming a slow erosion into a sudden catastrophic fracture. The analysis could potentially help predict the breakdown of structures as varied as concrete buildings, metal pressure vessels in powerplants, and the structural components of airplane bodies, but further work will be needed to show how these basic principles can be applied to these different materials.

“I don’t want to say it’s going to be the exact same phenomenon” in such different cases, Yildiz says, but the underlying principles of coupled environmental factors “could explain significant differences” in the way these materials behave under stress.

“We believe this behavior is universal” among different materials, Yip says, “but we haven’t proven that yet. It’s the beginning of a long journey.”

Ting Zhu, a professor of physics at Georgia Institute of Technology, says the MIT team’s work provides “a new perspective for a longstanding puzzle on the so-called upturn behavior of flow stress. The work represents a new paradigm that synergistically integrates the theoretical modeling with atomistic calculations, thereby enabling a parameter-free explanation of the puzzle.” Zhu, who was not connected with this research, adds that, “Their approach should be generally applicable to a wide range of the flow-stress problems for both crystalline and glassy solids.”

The work was supported by the U.S. Department of Energy’s Consortium for Advanced Simulation of Light Water Reactors and its Division of Materials Sciences and Engineering.