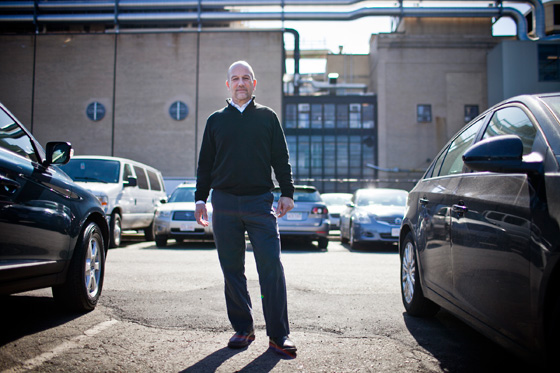 You probably cannot think of one offhand. If you did, it would certainly surprise Eran Ben-Joseph, a professor of landscape architecture and urban design at MIT. A few years ago, teaching MIT’s venerable site-planning class, Ben-Joseph found himself confronted with the problem of explaining to students why parking lots are so often nothing but vast fields of asphalt occupying prime urban and suburban real estate.

So Ben-Joseph started asking people if they could name parking lots that even had a few good qualities to them. “It started with this quick question: ‘Have you seen a great parking lot lately?’ I surveyed a lot of people I know, students and colleagues, and most people can’t point to one,” Ben-Joseph says. Before long, he had come to one conclusion: “Planners, developers and public officials should pay more attention to the issue.”

With that aim in mind, Ben-Joseph has produced a new book about the subject, Rethinking a Lot: The Design and Culture of Parking, published this month by MIT Press, in which he details the centrality of parking lots in our lives, questions their most common forms and suggests ways of improving them.

“We all use parking lots, and we all kind of hate them,” Ben-Joseph says. “Yet they’re part of everyday life and we have to deal with that. There are cultural and psychological issues around parking lots, and a lot of anxiety about how people behave and drive in them. We need to think about these spaces as being an important part of our daily lives.”

A lot bigger than Puerto Rico

Parking lots are indeed ubiquitous in the United States: They take up one-third of the surface area in some major cities. No one knows how many parking spaces exist in the country: Past estimates have ranged from about 100 million to 2 billion. The first figure seems far too low, since the nation has about 255 million registered passenger cars. Further estimates suggest that on average, three non-residential parking spaces exist for every car in the United States. That would yield almost 800 million parking spaces, comprising a total area larger than Puerto Rico.

That is a lot of lots. Indeed, one problem with parking spaces is that we seem to have too many of them. As Donald Shoup, an urban planning professor at the University of California at Los Angeles, and others have shown, civil engineers and planners routinely use rules of thumb about the number of parking spaces per capita they must build that seem to vastly overstate the actual needs of the population. Among other effects, plentiful and cheap parking keeps urban areas locked into a car dependency with social, economic and aesthetic drawbacks.

In some places, to be sure, this problem has lessened, particularly with the urban revival in many cities during the last couple of decades. “You look at aerial photography of the downtowns of U.S. cities in the 1950s and 1960s, you’ll be amazed at how many surface parking lots there were,” Ben-Joseph says.

But the parking lot problem is also a suburban issue, not just an urban one. Many huge suburban parking lots are built to accommodate a maximum capacity of cars that is only rarely needed. The largest mall near you probably has a parking lot that only approaches capacity during the holiday season; football stadiums have massive parking lots that may only be used 10 times per year.

Apart from everything else, these parking lots can create multiple environmental problems: More asphalt creates more heat, and leads to faster water runoff — which means plants might not have the chance to extract pollutants from water, as they often do in creeks and streams.

The trees have it

So what can be done to make parking lots greener and better integrated into their civic surroundings? Ben-Joseph recommends a menu of ideas to improve parking lots according to their settings — which he regards as “a healthier approach to planning, rather than giving prescriptive ideas about how to design them.”

For one thing, planners might simply plant trees throughout parking lots, as the architect Renzo Piano did at Fiat’s Lingotto factory in Turin, Italy. Low-use parking lots need not be entirely paved in asphalt, either: Miami’s Sun Life Stadium features large areas of grass lots that are environmentally better year-round.

“The whole space does not have to be designed the same way,” Ben-Joseph says. “Overflow parking can be designed differently, and not paved with asphalt.”

Lots can also incorporate green technology. Some parking spaces in Palo Alto, Calif., have charging stalls for electric vehicles. A Walmart parking lot in Worcester, Mass., has 12 wind turbines that generate clean electricity for the store. The Sierra Nevada Brewery parking lot in Chico, Calif., has solar panels built into its lattice structure.

Other parking lots are user-friendly because they recognize that drivers become pedestrians once they park. Ben-Joseph likes the redesign of the Porter Square parking lot in Cambridge, Mass., which helps pedestrians traverse its entrance more easily — “it has a nice relationship to the street, almost more like an urban plaza” — and cites an IKEA parking lot in San Diego that has built pedestrian walkways into the design.

Some urban planners who have read Rethinking a Lot say they approve of Ben-Joseph’s pragmatic approach. “I think every solution has to be quite contextual,” says Anastasia Loukaitou-Sideris, a professor of urban planning at the University of California at Los Angeles, who also calls the book “delightful” and “useful.”

Partly due to this variety of settings in which parking lots are found, Ben-Joseph regards the issue as a work in progress — for planners, designers, architects or anyone reading his book who has a better idea about making lots a lot better.

“Parking lots are not going to disappear,” Ben-Joseph says. “My intent is not to champion their abolition or to advocate strict codes and standards … but rather to illustrate their contemporary effects on our life and their great potential for the future.”

Freakonomics speaks with MIT Professor Eran Ben-Joseph about his book, “Rethinking a Lot: The Design and Culture of Parking,” which offers solutions to the parking lot.