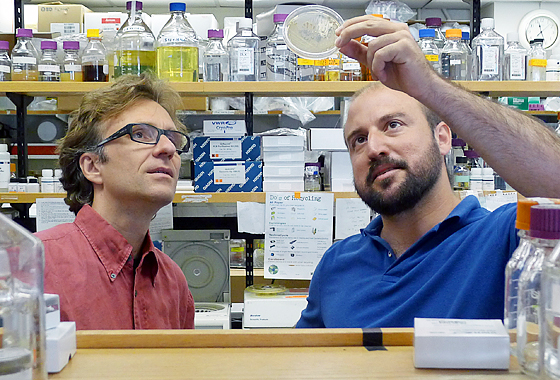 Competition is a strong driving force of evolution for organisms of all sizes: Those individuals best equipped to obtain resources adapt and reproduce, while others may fall by the wayside. Many organisms — mammals, birds and insects, for instance — also form cooperative social structures that allow resources to be defended and shared within a population.

But surprisingly, even microbes, which are thought to thrive only when able to win the battle for resources against those nearest to them, have a somewhat sophisticated social structure that relies on cooperation, according to MIT scientists. These researchers have recently found evidence that some ocean microbes wield chemical weapons that are harmless to close relatives within their own population, but deadly to outsiders.

The weapons are natural antibiotics produced by a few individuals whose closest relatives carry genes that make them resistant. The researchers believe that the few antibiotic producers are acting as protectors of the many, using the antibiotics to defend the population from competitors or to attack neighboring populations.

“We can’t know what the environmental interactions really are, because microbes are too small for us to observe them in action,” says Professor Martin Polz of MIT’s Department of Civil and Environmental Engineering (CEE), lead investigator on a study appearing in this week’s issue of the journal Science. “But we think the antibiotics play a role in fending off competitors. Of course, those competitors could also produce antibiotics. It’s a potential arms race out there.”

A population of ocean microbes is defined by genetic likeness and shared ecological activities, such as their preferred microhabitat — say, free-floating or attached to algae — or their ability to harvest a particular substance. Because close relatives within populations have very similar if not identical resource requirements, they must by necessity also be strong competitors with one another.

This makes cooperation involving antibiotics doubly surprising, because the ability to produce antibiotics is a classic example of a “selfish” gene that ought to increase the fitness — or reproductive rate — of the individual carrying the gene. In a strictly competitive environment, the microbe would use this advantage against its closest relatives. But now it looks as if this competition is modulated by social interactions where antibiotics produced by a few individuals act as “public goods”: items that benefit the group, rather than just the individual.

This differentiation of populations into individuals that produce antibiotics and those that are resistant is one of the first demonstrations that microbial populations engage in a division of labor by social role. This observation also provides an explanation for why so many genes are patchily distributed across genomes of closely related microbes. At least some of these genes may be responsible for creating tightly knit social units of bacteria in the wild.

“It’s easy to imagine bacteria in the environment as selfish creatures capable only of reproducing as fast as conditions allow, without any social organization,” says Otto Cordero, a CEE postdoc who is a first author on the Science paper. “But that is the mind-blowing part: Bacterial wars are organized along the lines of populations, which are groups of closely related individuals with similar ecological activities.”

The study also uncovers an untapped source of antibiotics that could have the potential to aid in the fight against human bacterial pathogens, which are rapidly developing resistance to the few antibiotics in use — nearly all of which are produced by soil-living bacteria.

“This paper [shows] that bacteria work together in complex relationships that have largely been underappreciated by the research community as a whole,” says Gerry Wright, a professor of biochemistry and biomedical sciences and director of the Michael G. DeGroote Institute for Infectious Disease Research at McMaster University. He adds, “The impact on our understanding of resistance is critical. … This work is really important in showing that we can, in fact, study these big questions in populations of natural bacteria, and we can learn something important about how we use antibiotics and avoid resistance in the clinic.”

To obtain these findings, the researchers tested about 35,000 interactions among pairs of 185 strains of Vibrionaceae bacteria populations taken from the ocean. They found that 44 percent of the strains were able to inhibit the growth of at least one other strain and 86 percent were inhibited by at least one other strain. They then used genomic analysis to determine genetic kinship.

Co-authors include Sarah Proehl, Lynn Ngo and Fatima Hussain, MIT alumnae who performed much of the testing during their undergraduate years through the MIT Undergraduate Research Opportunities Program. Other co-authors are former MIT postdocs Hans Wildschutte and Benjamin Kirkup, Frederique Le Roux of the IFREMER Laboratory of Genetics and Pathology in France, and Tracy Mincer of Woods Hole Oceanographic Institution.

Funding was provided by the Moore Foundation, the Broad Institute, the National Science Foundation and the Netherlands Organization for Scientific Research.