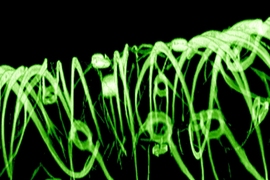 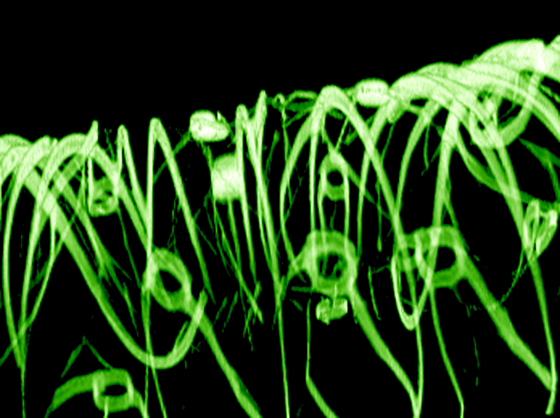 To control the three-dimensional shape of engineered tissue, researchers grow cells on tiny, sponge-like scaffolds. These devices can be implanted into patients or used in the lab to study tissue responses to potential drugs.

A team of researchers from MIT, Harvard University and Boston Children’s Hospital has now added a new element to tissue scaffolds: electronic sensors. These sensors, made of silicon nanowires, could be used to monitor electrical activity in the tissue surrounding the scaffold, control drug release or screen drug candidates for their effects on the beating of heart tissue.

The research, published online Aug. 26 in Nature Materials, could also pave the way for development of tissue-engineered hearts, says Robert Langer, the David H. Koch Institute Professor at MIT and a senior author of the paper.

“We are very excited about this study,” Langer says. “It brings us one step closer to someday creating a tissue-engineered heart, and it shows how novel nanomaterials can play a role in this field.”

Lead authors of the paper are Bozhi Tian, a former postdoc at MIT and Children’s Hospital; Jia Liu, a Harvard graduate student; and Tal Dvir, a former MIT postdoc. Other senior authors are Daniel Kohane, director of the Laboratory for Biomaterials and Drug Delivery at Children’s Hospital, and Charles Lieber, a Harvard professor of chemistry.

Until now, the only cellular platforms that incorporated electronic sensors consisted of flat layers of cells grown on planar metal electrodes or transistors. Those two-dimensional systems do not accurately replicate natural tissue, so the research team set out to design a 3-D scaffold that could monitor electrical activity, allowing them to see how cells inside the structure would respond to specific drugs.

The researchers built their new scaffold out of epoxy, a nontoxic material that can take on a porous, 3-D structure. Silicon nanowires embedded in the scaffold carry electrical signals to and from cells grown within the structure.

“The scaffold is not just a mechanical support for cells, it contains multiple sensors. We seed cells into the scaffold and eventually it becomes a 3-D engineered tissue,” Tian says.

The team chose silicon nanowires for electronic sensors because they are small, stable, can be safely implanted into living tissue and are more electrically sensitive than metal electrodes. The nanowires, which range in diameter from 30 to 80 nanometers (about 1,000 times smaller than a human hair), can detect less than one-thousandth of a watt, which is the level of electricity that might be seen in a cell.

In the Nature Materials study, the researchers used their scaffolds to grow cardiac, neural and muscle tissue. Using the engineered cardiac tissue, the researchers were able to monitor cells’ response to noradrenalin, a stimulant that typically increases heart rate.

Gordana Vunjak-Novakovic, a professor of biomedical engineering at Columbia University, says the work could help address a great need to engineer cells that respond to electrical stimuli, which may advance the treatment of cardiac and neurological disease.

“This is a beautiful example of how nanoelectronics can be combined with tissue engineering to monitor the behavior of cells,” says Vunjak-Novakovic, who was not part of the research team.

The team also grew blood vessels with embedded electronic sensors and showed that they could be used to measure pH changes within and outside the vessels. Such implantable devices could allow doctors to monitor inflammation or other biochemical events in patients who receive the implants. Ultimately, the researchers would like to engineer tissues that can not only sense an electrical or chemical event, but also respond to it appropriately — for example, by releasing a drug.

The team is now further studying the mechanical properties of the scaffolds and making plans to test them in animals.

The research was funded by the National Institutes of Health, the McKnight Foundation and Boston Children’s Hospital.