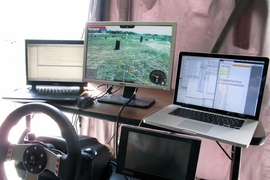 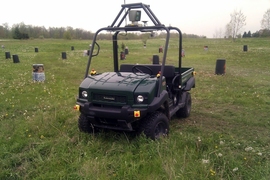 Caption:
A utility vehicle equipped with a laser range finder drives through a field, avoiding obstacles without human intervention.

Barrels and cones dot an open field in Saline, Mich., forming an obstacle course for a modified vehicle. A driver remotely steers the vehicle through the course from a nearby location as a researcher looks on. Occasionally, the researcher instructs the driver to keep the wheel straight — a trajectory that appears to put the vehicle on a collision course with a barrel. Despite the driver’s actions, the vehicle steers itself around the obstacle, transitioning control back to the driver once the danger has passed.

The key to the maneuver is a new semiautonomous safety system developed by Sterling Anderson, a PhD student in MIT’s Department of Mechanical Engineering, and Karl Iagnemma, a principal research scientist in MIT’s Robotic Mobility Group.

The system uses an onboard camera and laser rangefinder to identify hazards in a vehicle’s environment. The team devised an algorithm to analyze the data and identify safe zones — avoiding, for example, barrels in a field, or other cars on a roadway. The system allows a driver to control the vehicle, only taking the wheel when the driver is about to exit a safe zone.

Anderson, who has been testing the system in Michigan since last September, describes it as an “intelligent co-pilot” that monitors a driver’s performance and makes behind-the-scenes adjustments to keep the vehicle from colliding with obstacles, or within a safe region of the environment, such as a lane or open area.

“The real innovation is enabling the car to share [control] with you,” Anderson says. “If you want to drive, it’ll just … make sure you don’t hit anything.”

The group presented details of the safety system recently at the Intelligent Vehicles Symposium in Spain.

Off the beaten path

Robotics research has focused in recent years on developing systems — from cars to medical equipment to industrial machinery — that can be controlled by either robots or humans. For the most part, such systems operate along preprogrammed paths.

As an example, Anderson points to the technology behind self-parking cars. To parallel park, a driver engages the technology by flipping a switch and taking his hands off the wheel. The car then parks itself, following a preplanned path based on the distance between neighboring cars.

While a planned path may work well in a parking situation, Anderson says when it comes to driving, one or even multiple paths is far too limiting.

“The problem is, humans don’t think that way,” Anderson says. “When you and I drive, [we don’t] choose just one path and obsessively follow it. Typically you and I see a lane or a parking lot, and we say, ‘Here is the field of safe travel, here’s the entire region of the roadway I can use, and I’m not going to worry about remaining on a specific line, as long as I’m safely on the roadway and I avoid collisions.’”

Anderson and Iagnemma integrated this human perspective into their robotic system. The team came up with an approach to identify safe zones, or “homotopies,” rather than specific paths of travel. Instead of mapping out individual paths along a roadway, the researchers divided a vehicle’s environment into triangles, with certain triangle edges representing an obstacle or a lane’s boundary.

The researchers devised an algorithm that “constrains” obstacle-abutting edges, allowing a driver to navigate across any triangle edge except those that are constrained. If a driver is in danger of crossing a constrained edge — for instance, if he’s fallen asleep at the wheel and is about to run into a barrier or obstacle — the system takes over, steering the car back into the safe zone.

So far, the team has run more than 1,200 trials of the system, with few collisions; most of these occurred when glitches in the vehicle’s camera failed to identify an obstacle. For the most part, the system has successfully helped drivers avoid collisions.

Benjamin Saltsman, manager of intelligent truck vehicle technology and innovation at Eaton Corp., says the system has several advantages over fully autonomous variants such as the self-driving cars developed by Google and Ford. Such systems, he says, are loaded with expensive sensors, and require vast amounts of computation to plan out safe routes.

"The implications of [Anderson's] system is it makes it lighter in terms of sensors and computational requirements than what a fully autonomous vehicle would require," says Saltsman, who was not involved in the research. "This simplification makes it a lot less costly, and closer in terms of potential implementation."

In experiments, Anderson has also observed an interesting human response: Those who trust the system tend to perform better than those who don’t. For instance, when asked to hold the wheel straight, even in the face of a possible collision, drivers who trusted the system drove through the course more quickly and confidently than those who were wary of the system.

And what would the system feel like for someone who is unaware that it’s activated? “You would likely just think you’re a talented driver,” Anderson says. “You’d say, ‘Hey, I pulled this off,’ and you wouldn’t know that the car is changing things behind the scenes to make sure the vehicle remains safe, even if your inputs are not.”

He acknowledges that this isn’t necessarily a good thing, particularly for people just learning to drive; beginners may end up thinking they are better drivers than they actually are. Without negative feedback, these drivers can actually become less skilled and more dependent on assistance over time. On the other hand, Anderson says expert drivers may feel hemmed in by the safety system. He and Iagnemma are now exploring ways to tailor the system to various levels of driving experience.

The team is also hoping to pare down the system to identify obstacles using a single cellphone. “You could stick your cellphone on the dashboard, and it would use the camera, accelerometers and gyro to provide the feedback needed by the system,” Anderson says. “I think we’ll find better ways of doing it that will be simpler, cheaper and allow more users access to the technology.”

This research was supported by the United States Army Research Office and the Defense Advanced Research Projects Agency. The experimental platform was developed in collaboration with Quantum Signal LLC with assistance from James Walker, Steven Peters and Sisir Karumanchi.