Calculating the cost of advanced manufacturing 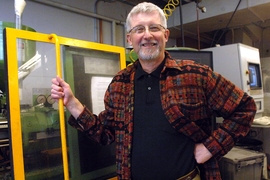 As the United States seeks to reinvigorate its job market and move past economic recession, MIT News examines manufacturing’s role in the country’s economic future through this series on work at the Institute around manufacturing.

For Tim Gutowski, advanced manufacturing is an opportunity not just to boost employment, but also to improve the environment.

Gutowski’s group has spent more than a decade studying manufacturing’s environmental impacts through life-cycle analysis, a soup-to-nuts approach that calculates a product’s environmental costs throughout its lifetime: from extracting raw materials to powering the industrial processes to make the product and, finally, the impacts associated with consuming the product on a large scale.

Researchers routinely perform life-cycle assessments for traditional industries such as automotive manufacturing and timber production. Such industries have been around for decades, and Gutowski says information on their manufacturing processes is relatively easy to obtain. However, he says, it’s difficult to calculate the environmental costs associated with newer technologies that haven’t yet reached the point of mass production.

“With new processes that evolve, we don’t know what that whole journey is going to look like, so there’s a challenge there,” Gutowski says. “I don’t think it’s impossible, and it’s not too soon to start thinking about it.”

Take, for example, carbon nanotubes — sheets of carbon molecules rolled into cylinders. These tiny hollow tubes have unusual optical, electrical and mechanical properties; scientists are exploiting their strength and flexibility for applications including bulletproof clothing, superconductive electrical cables, and scaffolds for artificial bone and muscle.

For the most part, carbon nanotubes have shown promise in the laboratory. But Gutowski says researchers need to figure out how to scale up the technology’s production if it’s ever to be widely adopted. To do this, he says, one needs to know how much energy is required to produce the material at a large scale.

In 2010, Gutowski’s group calculated the energy requirements for carbon-nanotube production. There wasn’t much data to work with, as the field was relatively new, and a lot of information was proprietary. But the researchers came across data published by a group at Rice University describing the conditions used to process nanotubes, including flow rates and temperature and pressure ranges. Using the laws of thermodynamics, Gutowski’s group calculated the minimum energy required to run each step in the production process.

“We found that the energy requirements made carbon nanotubes one of the most energy-intensive materials on the planet,” Gutowski says. “It’s in the range of gold or platinum.”

He explains that such energy-intensive values are largely due to carbon nanotubes’ low yields: A lot of gas needs to be processed at very high temperatures and pressures to produce just a few micrograms of the product. Gutowski observes that in the short time since his 2010 study, researchers have already experienced a “very fast learning curve,” improving nanotubes’ yields — and energy efficiency — significantly.

Still, there is room for improvement, and not just in the manufacture of carbon nanotubes. In 2009, Gutowski’s group found that processes involved in manufacturing new technologies such as semiconductors and solar panels are vastly less efficient than those for more traditional products like manhole covers and car tires. Specifically, the group found that advanced processes — for example, vapor deposition and etching — require more energy per unit of material processed than many older techniques such as casting and machining.

Gutowski also found that newer technologies often require many more steps in the manufacturing process that don’t directly contribute to making the product. For example, after making a batch of microchips in a chamber, manufacturers may run a gas through the chamber to purify it for the next batch — an energy-intensive step that that adds significantly to the energy cost of the device.

“It seems to be a tipoff that somehow we’re not pricing energy and materials properly,” Gutowski says.

This all adds up to a rather complex picture. On the one hand, extra energy-intensive processing steps could produce more powerplant emissions. On the other hand, newer technologies are made at relatively low yields, not nearly on the scale at which traditional materials such as steel are made.

In order to evaluate a product’s total environmental impact, Gutowski says one also needs to look at what he calls the “use phase” — how a consumer uses a given product. For example, while manufacturing solar panels requires a lot of energy, the panels themselves make up for that energy, and then some, once they’re put into use.

“You have to look at a product from beginning to end, including all phases of life,” Gutowski says. “What further benefit can you get from it? That may outweigh the energy put in.”

Julian Allwood, a senior lecturer at the University of Cambridge, says Gutowski’s approach to manufacturing’s environmental impacts is one of “gentle skepticism.”

“Tim’s work is characterized by enormous integrity and attention to detail,” Allwood says. “When someone claims that some new direction might show environmental benefits, his instinct is to question that carefully, and as a result he has published a stream of papers of great value. … Unless we look for this wider view, we can easily make very bad decisions, where the overall environmental impact worsens.”