Liquid batteries could level the load 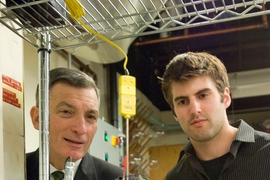 ↓ Download Image
Caption: Professor Donald Sadoway and Materials Processing Center Research Affiliate David Bradwell observe one of their small test batteries in the lab. The battery itself is inside the heavily insulated metal cylinder at center, which heats it to 700 degrees Celsius.
Credits: Photo: Patrick Gillooly 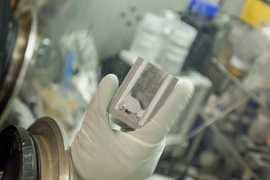 Caption:
Professor Donald Sadoway and Materials Processing Center Research Affiliate David Bradwell observe one of their small test batteries in the lab. The battery itself is inside the heavily insulated metal cylinder at center, which heats it to 700 degrees Celsius.
Credits:
Photo: Patrick Gillooly

The biggest drawback to many real or proposed sources of clean, renewable energy is their intermittency: The wind doesn’t always blow, the sun doesn’t always shine, and so the power they produce may not be available at the times it’s needed. A major goal of energy research has been to find ways to help smooth out these erratic supplies.

New results from an ongoing research program at MIT, reported in the Journal of the American Chemical Society, show a promising technology that could provide that long-sought way of leveling the load — at far lower cost and with greater longevity than previous methods. The system uses high-temperature batteries whose liquid components, like some novelty cocktails, naturally settle into distinct layers because of their different densities.

The three molten materials form the positive and negative poles of the battery, as well as a layer of electrolyte — a material that charged particles cross through as the battery is being charged or discharged — in between. All three layers are composed of materials that are abundant and inexpensive, explains Donald Sadoway, the John F. Elliott Professor of Materials Chemistry at MIT and the senior author of the new paper.

“We explored many chemistries,” Sadoway says, looking for the right combination of electrical properties, abundant availability and differences in density that would allow the layers to remain separate. His team has found a number of promising candidates, he says, and is publishing their detailed analysis of one such combination: magnesium for the negative electrode (top layer), a salt mixture containing magnesium chloride for the electrolyte (middle layer) and antimony for the positive electrode (bottom layer). The system would operate at a temperature of 700 degrees Celsius, or 1,292 degrees Fahrenheit.

In this formulation, Sadoway explains, the battery delivers current as magnesium atoms lose two electrons, becoming magnesium ions that migrate through the electrolyte to the other electrode. There, they reacquire two electrons and revert to ordinary magnesium atoms, which form an alloy with the antimony. To recharge, the battery is connected to a source of electricity, which drives magnesium out of the alloy and across the electrolyte, where it then rejoins the negative electrode.

The inspiration for the concept came from Sadoway’s earlier work on the electrochemistry of aluminum smelting, which is conducted in electrochemical cells that operate at similarly high temperatures. Many decades of operation have proved that such systems can operate reliably over long periods of time at an industrial scale, producing metal at very low cost. In effect, he says, what he figured out was “a way to run the smelter in reverse.”

Over the last three years, Sadoway and his team — including MIT Materials Processing Center Research Affiliate David Bradwell MEng ’06, PhD ’11, the lead author of the new paper — have gradually scaled up their experiments. Their initial tests used batteries the size of a shot glass; they then progressed to cells the size of a hockey puck, three inches in diameter and an inch thick. Now, they have started tests on a six-inch-wide version, with 200 times the power-storage capacity of the initial version.

The electric utility companies that would ultimately be the users of this technology, Sadoway says, “don’t care what the stuff is made of, or what the size is. The only question is what’s the cost of storage” for a given amount of power. “I can build a gorgeous battery to a NASA price point,” he says — but when cost is the primary driver, “that changes the search” for the best materials. Just based on the rarity and cost of some elements, “large sections of the periodic table are off limits.”

The team is continuing to work on optimizing all aspects of the system, including the containers used to hold the molten materials and the ways of insulating and heating them, as well as ways of reducing the operating temperature to help cut energy costs. “We’ve discovered ways to decrease the operating temperature without sacrificing electrical performance or cost,” Sadoway says.

While others have researched similar liquid-battery systems, Sadoway says he and his team are the first to produce a practical, functional storage system using this approach. He attributes their success in this partly to the unique mix of expertise in a place like MIT: “People in the battery industry don’t know anything about electrolytic smelting in molten salts. Most would think that high-temperature operation would be inefficient.”

Robert Huggins, a professor emeritus of materials science and engineering at Stanford University, says, “As for any radically different approach, there are a number of new practical problems to solve in order for it to become a practical alternative for use in large-scale energy storage, [including] electrolyte evaporation, and corrosion and oxidation of components, as well as the ever-present issue of cost.” Nevertheless, he says, this is “a very innovative approach to electrochemical energy storage, and it is being explored with a high degree of sophistication.”

Sadoway, along with Bradwell, has founded a company to bring this technology to commercialization, and is on sabbatical this year working with the company, Liquid Metal Battery Corp. “If this technology succeeds,” he says, “it could be a game-changer” for renewable energy.

The work has been funded by grants from the Deshpande Center for Technological Innovation at MIT, the Chesonis Family Foundation, the U.S. Department of Energy's ARPA-E program, and Total, S.A.