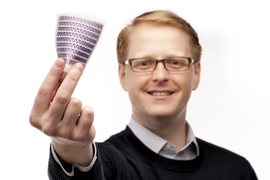 Barr's most recent inventive breakthrough — a pioneering approach to fabricating solar cells on a variety of everyday surfaces — could lead to widespread adoption of solar power. Barr's approach, which enables solar cells to be printed directly on common materials such as paper and textiles, could reduce the cost of solar energy by eliminating the need for specialized installation.

“There is a huge opportunity to harvest energy from the light that hits every surface around us,” Barr said. “If we can take that energy and convert it into electricity without compromising the aesthetics of everyday surfaces that is extremely powerful.” Developed with the support of the eni-MIT Solar Frontiers Center and professors Karen Gleason and Vladimir Bulović, Barr’s lightweight and bendable solar technology opens untapped venues for commercial applications, including wall paper, window shades and clothing. The portability of the technology will allow for inexpensive power generation, which Barr not only hopes will increase adoption in the United States, but help those in the developing world as well.

Barr was an imaginative risk taker from an early age. Refusing to be constrained by the limits of any one interest area, he immersed himself in a variety of subject matters completing majors in chemical engineering, mathematics and music as an undergraduate student at Vanderbilt University. Barr's passion for diverse influences remains at the core of his approach to invention today.

"Miles Barr is a terrific example of how not just science and math majors, but individuals with a multitude of interests can be successful inventors. We celebrate students like Miles, those with wide-ranging backgrounds who inspire creative thinking in others, with the Lemelson-MIT Student Prize," said Joshua Schuler, executive director of the Lemelson-MIT Program. "With his passion for innovation, Miles has leveraged his diverse credentials to advance solar technology in a way that could change the world."