Some MIT freshmen get high-level advisors 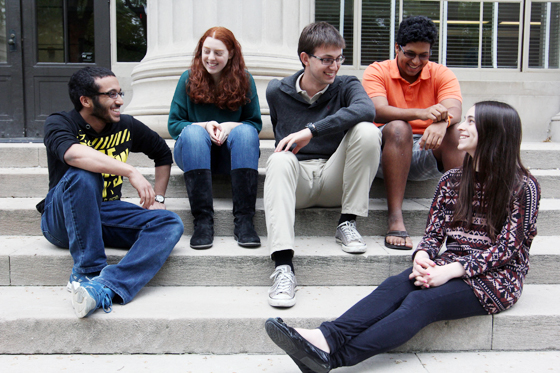 A dozen lucky freshmen in MIT’s Class of 2015 got quite a surprise when they opened their enrollment packages last summer: They each found out that their freshman advisor would be one of the Institute’s top officials — President Susan Hockfield, Provost L. Rafael Reif or Chancellor Eric Grimson.

“My first question was, ‘Why me?’” says Jeffrey Sperling, one of five MIT freshmen advised by Hockfield this year. “What were the chances of that happening?”

Once the idea sank in, though, Sperling was excited to realize he’d have the benefit of “the wisdom and experience of someone in such an impressive position.” And over the course of the year, dealing with the pressures of juggling activities and grappling with the choice of a major, he found Hockfield to be “extremely skilled at providing advice on how to balance so many divergent interests, and focus on the activities that excited me the most.”

“She was able to give tremendous advice on how to manage time,” he adds.

All freshmen at the Institute are assigned an academic advisor, or an advising seminar, to help them navigate the many adjustments and decisions facing a new student in a demanding academic environment. But this year was the first time that these top administrators decided to personally take on that role.

“It’s been absolutely fascinating to be a freshman advisor,” Hockfield says. “I learned a lot about the freshman experience. I’ve seen them grasp the challenges of MIT.”

Fernando Nuñez received a letter last August at his home in Puerto Rico telling him that Rafael Reif — a native of Venezuela — would be his advisor. He noticed the name and initially thought, “OK, so he speaks Spanish.”

“I didn’t know what a provost was, so I had to look it up,” Nuñez adds. “Wow, I was really surprised.”

Nuñez says he “always knew I was going to do mechanical engineering,” so he didn’t need much help with his plans, but found it helpful to have that personal relationship. Since one of his classes was held in a lecture hall near the provost’s office, he would often stop in just to say hello or to chat with Reif’s assistant.

Nuñez also found it helpful to be able to interact with his associate advisor, an upperclassman to whom each freshman is also assigned. Nuñez’s associate advisor also checks in with him from time to time to make sure things are going well.

Hockfield emphasizes that associate advisors play an important role in providing information that faculty advisors might not know — such as details on courses outside their own departments.

“I don’t know if faculty know, when we ask them to be advisors, that the associate advisors and the Undergraduate Advising and Academic Programming office are available,” she says. “There are a lot of resources,” she adds, to help advisors meet the particular needs of their advisees.

Some of the students who learned that these top administrators would be advising them worried that might mean they would be too busy to devote much time to advising.

“I was concerned at first,” says Elana Ben-Akiva, who was one of Hockfield’s advisees. “But it wasn’t an issue at all. She not only gave me enough advising time, but she spent time socializing with us and really getting to know us. She encouraged us to email her or stop by her office whenever we needed something.”

Amelia Brooks was assigned Reif as her advisor. “I thought I might be intimidated,” she says. But “he was very friendly and welcoming from the start.”

Throughout the year, “he wanted to make sure we were all happy, doing OK academically, and not too stressed,” Brooks says. “It was nice to have someone I could talk to about classes, about what to take. It was just the right amount of interaction.”

Reif enjoyed the experience as well. “I love it when they unexpectedly just stop by,” he says. He says it’s been fun to be able to watch “how rapidly they grow — to see kids fresh from high school, and after one semester, how mature they are. It’s just a delight.”

It’s also been useful for his own understanding, Reif says. “Everything we do here, we do for the benefit of the students,” he says. “There’s no better way to know what the experience is like for them than by talking to them.”

What’s on their minds

Grimson also found advising to be rewarding. “The experience is great fun,” he says. “Our students come into MIT full of excitement, full of ideas, ready to change the world,” he says, and it’s a pleasure “to be able to point them in a good direction, to nudge them and to serve as a sounding board.”

Grimson adds, “Students are the lifeblood of the Institute. It’s important for us to have an opportunity to find out what’s on students’ minds.”

In addition to the one-to-one advising sessions, Hockfield invited all five of her advisees together for an occasional lunch or dinner with her — sometimes attracting puzzled looks from other students when they saw a group of their classmates sitting casually with the president at a table in The Howard, the dining hall of Maseeh Hall. Over the course of the year, the five advisees ended up as good friends, says Jennifer Plotkin, one of Hockfield’s advisees.

Plotkin found Hockfield to be “very easy to talk to,” and “surprisingly accessible, for somebody who’s so busy.” She sought out the president for advice when she got a low grade on her first test in a freshman physics class. She thought she might just not be able to do well in physics, but Hockfield, noting that she was sailing through another class that is considered much more difficult, persuaded her not to give up on the class. “She said, ‘I know you can do better than this! Don’t give up.’”

Sure enough, Plotkin knuckled down and mastered the material, earning an A on the midterm. At their next meeting, she told Hockfield of her progress.

“She hugged me and she said, ‘You go, girl!’” Plotkin says — prompting a call home to say, “Mom, the president of MIT just hugged me!”

The delight at the turnaround was mutual. “It’s one of the most exciting things that happened to me this year,” Hockfield says.