New material could offer hope to those with no voice 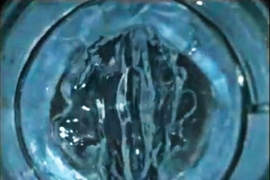 Caption:
Researchers at MIT and MGH have developed a polymer gel that mimics the vibrations of human vocal cords.
Credits:
Image: MIT/MGH
In 1997, the actress and singer Julie Andrews lost her singing voice following surgery to remove noncancerous lesions from her vocal cords. She came to Steven Zeitels, a professor of laryngeal surgery at Harvard Medical School, for help.

Zeitels was already starting to develop a new type of material that could be implanted into scarred vocal cords to restore their normal function. In 2002, he enlisted the help of MIT’s Robert Langer, the David H. Koch Institute Professor in the Department of Chemical Engineering, an expert in developing polymers for biomedical applications.

The team led by Langer and Zeitels has now developed a polymer gel that they hope to start testing in a small clinical trial next year. The gel, which mimics key traits of human vocal cords, could help millions of people with voice disorders — not just singers such as Andrews and Steven Tyler, another patient of Zeitels’.
About 6 percent of the U.S. population has some kind of voice disorder, and the majority of those cases involve scarring of the vocal cords, says Sandeep Karajanagi, a former MIT researcher who developed the gel while working as a postdoc in the Langer lab. Many of those are children whose cords are scarred from intubation during surgery, while others are victims of laryngeal cancer.

Other people who could benefit are those with voices strained from overuse, such as teachers. “This would be so valuable to society, because every time a person loses their voice, say, a teacher or a politician, all of their contributions get lost to society, because they can’t communicate their ideas,” Zeitels says.

When Langer and his lab joined the effort in 2002, they considered two different approaches: creating a synthetic material that would mimic the properties of vocal cords, or engineering artificial vocal-cord tissue. Both approaches have potential, Langer says, but the team decided to pursue a synthetic material because it would likely take less time to reach patients. “Making a totally natural vocal cord is a more long-term project,” he says.

Some doctors treat vocal-fold scars with materials normally used in dermatology or plastic surgery, in hopes of softening the vocal cords, but those don’t work for everyone, and the effects don’t last long, says Nathan Welham, assistant professor of otolaryngology at the University of Wisconsin School of Medicine.

“Scarred vocal cords are really hard to fix,” says Welham, who is not involved in this project. “People have tried this and that, but there’s really no commonly used, available approach that treats the inherent problem of scarring in the vocal folds.”

Other researchers have tried developing drugs that would dissolve the scar tissue, but the MIT/Harvard team decided on a different approach.

“What we did differently is we looked at this as a mechanical problem that we need to solve. We said, ‘Let’s not look at the scar itself as a problem, let’s think of how we can improve the voice despite the presence of the scar tissue,’” says Karajanagi, who is now an instructor of surgery at Harvard Medical School and a researcher at the Center for Laryngeal Surgery and Voice Rehabilitation at Massachusetts General Hospital.

The team chose polyethylene glycol (PEG) as its starting material, in part because it is already used in many FDA-approved drugs and medical devices.

By altering the structure and linkage of PEG molecules, the researchers can control the material’s viscoelasticity. In this case, they wanted to make a substance with the same viscoelasticity as human vocal cords. Viscoelasticity is critical to voice production because it allows the vocal cords to vibrate when air is expelled through the lungs.

For use in vocal cords, the researchers created and screened many variations of PEG and selected one with the right viscoelasticity, which they called PEG30. In laboratory tests, they showed that the vibration that results from blowing air on a vocal-fold model of PEG30 is very similar to that seen in human vocal folds. Also, tests showed that PEG30 can restore vibration to stiff, non-vibrating vocal folds such as those seen in human patients suffering from vocal-fold scarring.

Under FDA guidelines, the gel would be classified as an injectable medical device, rather than a drug. The researchers, who have published more than a dozen papers on their voice-restoration efforts, have applied for a patent on the material and are working toward FDA approval. If approved for human use, the gel would likely have to be injected at least once every six months, because it eventually breaks down.

The project is funded by the Institute of Laryngology and Voice Restoration, which consists of patients whose mission is to support and fund research and education in treating and restoring voice. Julie Andrews is the foundation’s honorary chairwoman.

In a study recently published in the Annals of Otology, Rhinology & Laryngology, the researchers tested the biocompatibility of the gel by injecting it into the healthy vocal folds of dogs. After four months, the treated dogs showed no damage to their vocal cords.

“That gives us exciting data that this has a real good chance of working in people without creating damage,” Karajanagi says, adding that clinical trials will be needed to confirm this.

Such gels could find other medical applications, by varying the chemical properties of the PEG, Langer says. “We think of what we do as ‘designer polymers,’” he says. “We can modify them depending on the problem we’re trying to solve.”