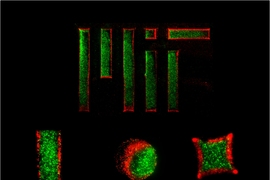 Caption:
Using a temperature-responsive micromold, MIT engineers created two-layer gel microparticles (the red and green areas represent separate layers).
Credits:
Photo: Halil Tekin
Tiny particles made of polymers hold great promise for targeted delivery of drugs and as structural scaffolds for building artificial tissues. However, current production methods for such microparticles yield a limited array of shapes and can only be made with certain materials, restricting their usefulness.

In an advance that could broadly expand the possible applications for such particles, MIT engineers have developed a way to make microparticles of nearly any shape, using a micromold that changes shape in response to temperature. They can also precisely place drugs into different compartments of the particles, making it easier to control the timing of drug release, or arrange different cells into layers to create tissue that closely mimics the structure of natural tissues.

The new technique, described in a paper published online July 18 in the Journal of the American Chemical Society, also allows researchers to create microparticles from a much more diverse range of materials, says Halil Tekin, an MIT graduate student in electrical engineering and computer science and lead author of the paper.

Currently, most drug-delivering particles and cell-encapsulating microgels are created using photolithography, which relies on ultraviolet light to transform liquid polymers into a solid gel. However, this technique can be used only with certain materials, such as polyethylene glycol (PEG), and the ultraviolet light may harm cells.

Another way to create microparticles is to fill a tiny mold with a liquid gel carrying drug molecules or cells, then cool it until it sets into the desired shape. However, this does not allow for creation of multiple layers.

The MIT research team, led by Ali Khademhosseini, associate professor in the MIT-Harvard Division of Health Sciences and Technology, and Robert Langer, the David H. Koch Institute Professor, overcame that obstacle by building micromolds out of a temperature-sensitive material that shrinks when heated.

The mold is first filled with a liquid gel that contains one kind of cell or drug. After the gel has solidified, the mold is heated so the walls surrounding the solid gel shrink, pulling away from the gel and creating extra space for a second layer to be added. The system could also be modified to incorporate additional layers, Tekin says.

"The method is quite creative," says Michael Sefton, professor at the University of Toronto Institute of Biomaterials and Biomedical Engineering, who was not involved in this project. "It offers the opportunity to make multilayer microstructures. The next step is figuring out what you can do with these two-layer structures."

So far, the researchers have created cylindrical and cubic particles, as well as long striped particles, and many other shapes should be possible, Tekin says. Their starting material was a gel made of agarose, a type of sugar.

The long striped particles would be particularly useful for engineering elongated tissues such as cardiac tissue, skeletal muscle or neural tissue. In this study, the researchers created striped particles with a first layer of fibroblasts (cells found in connective tissue), surrounded by a layer of endothelial cells, which form blood vessels. Researchers also created cubic and cylindrical particles in which liver cells were encapsulated in the first layer, surrounded by a layer of endothelial cells. This arrangement could accurately replicate liver tissue.

Such gels could also be embedded with proteins that help the cells orient themselves in a desired structure, such as a tube that could form a capillary. The researchers are also planning to create particles that contain collagen, which constitutes much of the body's structural tissues, including cartilage.

Eventually, the researchers hope to use this technique to build large tissues and even entire organs. Such tissues could be used in the laboratory to test potential new drugs. "If you can create 3-D tissues which are functional and really mimicking the native tissue, they are going to give the right responses to drugs," Tekin says.

This could speed up the drug discovery process and decrease the costs, because fewer animal experiments would be needed, he says.