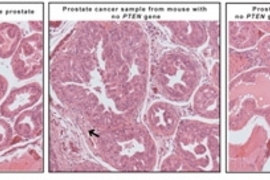 ↓ Download Image
Caption: The image on the left shows a sample from a normal prostate, with organized cells lining the O-shaped ductules. Â Mice without theÂ PTENÂ gene had developed cancer, which is characterized by enlarged glands and disorganized cells clogging the ductules (middle image). Â When mTORC2 activity is blocked in mice lacking the PTENÂ gene, the prostate ductulesÂ resemble the appearance of normal prostate samples, with organized cells along the ductules (right image).
Credits: Image courtesy / Sabatini and Cell Press (Feb. 3, 2009)

Caption:
The image on the left shows a sample from a normal prostate, with organized cells lining the O-shaped ductules. Â Mice without theÂ PTENÂ gene had developed cancer, which is characterized by enlarged glands and disorganized cells clogging the ductules (middle image). Â When mTORC2 activity is blocked in mice lacking the PTENÂ gene, the prostate ductulesÂ resemble the appearance of normal prostate samples, with organized cells along the ductules (right image).
Credits:
Image courtesy / Sabatini and Cell Press (Feb. 3, 2009)

Blocking a specific protein complex prevents the formation of tumors in mice genetically predisposed to develop prostate cancer, researchers at the Whitehead Institute for Biomedical Research have found. Interestingly, inhibiting this protein complex in non-cancer cells appears to have no impact, suggesting that the protein complex may represent a promising target for drug development.

Prostate cancer, the second-most common cancer among men in the United States, can be caused by mutation of a known tumor suppressor gene that restrains abnormal cell growth. Studies have shown that an estimated 70 percent of men with prostate cancer have a deletion of this gene, known as PTEN.

In prostate cells where PTEN is absent, no mechanism exists to prevent the cells from dividing and growing uncontrollably. In a new study appearing in the Feb. 3 edition of Cancer Cell, researchers in Sabatini's lab found that prostate cells also require the mTORC2 protein complex to form tumors.

In a mouse model of human prostate cancer, the PTEN gene is deleted, causing prostate tumors to form. By switching off a protein known as RICTOR, one of the proteins comprising the mTORC2 protein complex, Whitehead researchers found that tumor formation could be blocked and prostate cancer development inhibited in study mice -- despite the PTEN deletion.

To test how a RICTOR-blocking drug might affect healthy cells, Sabatini's lab worked with normal cells where RICTOR was inhibited and found that regular cellular activity is unaffected. This suggests that RICTOR inhibition may offer a novel therapeutic target.

According to David Guertin, a postdoctoral researcher in Sabatini's lab and lead author of this paper, "if you want to make a drug, this protein complex is an appealing target because that drug may not have a big impact on normal cells, but it will have a detrimental effect on cancer cells. It's really a major finding."

Finding a protein that's an acceptable target poses a substantial challenge, explains Sabatini, who is also a Howard Hughes Medical Institute Investigator and professor of biology at MIT. "Evolution has reused proteins in many, many roles, and often proteins important in cancer are also important in other processes. Therefore, when you inhibit them you get more toxicities than you would want."

And while this study specifically focused on mTORC2's role in prostate cancer, inhibiting mTORC2 could lead to therapies for a wide range of cancers, in particular brain and ovarian cancer. Sabatini notes, "We have evidence that in other cancers where PTEN is lost, the same kind of paradigm may operate."

Even if the loss of PTEN functions similarly in other cancers, the researchers are far from developing an inhibitor. Scientists still need to better understand the mTORC2 protein complex structure and to investigate how fully developed malignant tumors react to blocking RICTOR.

Possibly the greatest hurdle will be to find a drug that actually works. "It's really hard to design an inhibitor. And because it's so challenging to do this pharmacologically, we wanted to make a genetic model first showing that we could inhibit this," says Guertin. "This study obviously has big implications, and that could generate interest now to move forward."

This research was supported by the National Institutes of Health and the Keck Foundation.

David Sabatini's primary affiliation is with Whitehead Institute for Biomedical Research, where his laboratory is located and all his research is conducted. He is also a Howard Hughes Medical Institute investigator and a professor of biology at Massachusetts Institute of Technology.