Analysis knocks down theory on origin of cell structure 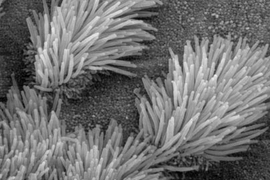 Understanding how living cells originated and evolved into their present forms remains a fundamental research area in biology, one boosted in recent years by the introduction of new tools for genomic analysis. Now, researchers at MIT and Boston University have used such tools to put what they say is "the last nail in the coffin" for one theory about the origin of a basic structure in the cell.

In the process, by illuminating a key step in the initial evolution of a basic structure that still exists in most cells in the human body, it may help researchers understand how some of these components work. These include parts of the neurons that make up our brains, sperm cells that determine fertility, and basic elements of cellular reproduction.

Many biologists have thought that three of the basic structures within the kinds of cells that make up all animals and plants -- called eukaryotic cells -- started out as separate, independent organisms. Then, at some point, these merged with other primitive cells to produce a symbiotic unit. But new evidence strongly contradicts that origin for one of those structures.

Eukaryotes are cells that have a nucleus within them: a membrane-surrounded kernel at the cell's center that contains its genetic material, DNA. These are the cells that make up virtually all of the complex, multicellular life on Earth, and they differ from the smaller, more primitive prokaryotes (bacteria and archaea), which have no such internal structure and whose DNA floats freely within their outer membranes.

The idea that the eukaryotic cell's nucleus originated as a separate organism, initially greeted with skepticism decades ago, is now a mainstream view though still not universally accepted. The process is known as endosymbiosis.

Similarly, other structures within such cells -- tiny subunits called mitochondria, which produce all of the cell's energy -- are now generally believed to have originated as separate organisms. And a third type of structure in eukaryotic cells, called cilia, the tail-like structures that enable them to move or to sense their environment, are also thought by many biologists to be yet another example of endosymbiosis.

But the new analysis by Hyman Hartman, visiting scientist in MIT's Center for Biomedical Engineering, and Temple Smith of Boston University, published in the April issue of the journal Cell Motility and the Cytoskeleton, provides strong evidence that this idea cannot be true for the origin of cilia. They found that genes that produce the cilia have unique characteristics that are not present in the kinds of simple cells that would have led to the symbiotic union. That suggests that cilia may have originated earlier, within the evolving cell, through a process that remains to be understood.

In short, these cell structures must not have arisen through mergers and acquisitions, as the other cell components were, but were developed in-house.

The paper describing the new findings was designated a "must read" by the Faculty of 1,000, an online service whose users select what they think are the most important research papers out of the scientific journals. Linda Amos, a biologist at the Medical Research Council's Laboratory of Molecular Biology in Cambridge, England, said she selected the paper for that recognition "because it suggests a likely route for a crucial step in the evolution of eukaryotes from prokaryotes."

Amos said others had suggested "that the cilium itself might have once been an independent free-swimming prokaryotic cell that a pre-eukaryote could have taken over in a similar way to the mitochondrion, by engulfing it." But the new research "makes it much more likely that the cilium with its complicated array of specialized dyneins [proteins] developed gradually within the same cell type that eventually itself became the ancestral eukaryote."

That development process, Hartman says, may be related to the evolution of mitosis, the process of cell division that is the basis of all plant and animal reproduction, and unraveling its origins could help in understanding this fundamental process.

"It's a big advance," he says. It provides "evidence for a very long history of something that was there before" the origin of the kind of cells that made all advanced life possible. If this analysis is confirmed, he says, "understanding the cilia is now going to become one of the great projects" for biologists to pursue.

A version of this article appeared in MIT Tech Talk on April 29, 2009 (download PDF).