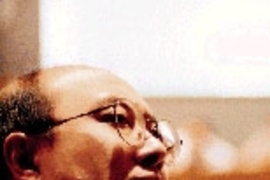 Economists and policy-makers alike are trying to assess why risk-management systems and regulatory constraints didn't kick in before the global economy became so weak. To most, this situation is a shock.

Economist Andrew Lo is less surprised. A professor at the MIT Sloan School of Management, Lo has studied the connections between financial decision-making, neuroscience and evolutionary psychology. His ideas about human behavior in financial markets have attracted the attention of policymakers in Washington who want not only to sort out the current crisis but also to head off future destructive events.

Testifying before the House Oversight Committee last November, Lo discussed how credit crises have been regular occurrences over the past 35 years. "Financial crises are an unfortunate but necessary consequence of modern capitalism," he explained. Financial losses, he added, are a byproduct of innovation, "but disruptions and dislocations are greatly magnified when risks have been incorrectly assessed and incorrectly assigned."

Lo believes that "behavioral blind spots" -- evolutionarily hardwired reactions to perceived risks and rewards -- are particularly dangerous during periods of economic extreme. That is, during both bubbles and crashes.

Lo recently shared his thoughts on the financial crisis.

Q. What's the most important implication of the financial crisis?

A. For CEOs and other corporate leaders, the single most important implication is about the current state of corporate governance. Many corporations did a terrible job in assessing and managing their risk exposures, with some of the most-sophisticated companies reporting tens of billions of dollars in losses in a single quarter. How do you lose $40 billion in a quarter and then argue that you've properly assessed your risk exposures? I don't think it's credible to say it was just "bad luck." If troubled companies want to explain away 2008 as a "black swan," then someone should take responsibility for creating the oil slick that seems to have tarred the entire flock! The current crisis is a major wake-up call that we need to change corporate governance to be more risk-sensitive.

Q. What allowed this crisis to happen? How could so many seemingly smart people be so blindsided?

A. The very fact that so many smart and experienced corporate leaders were all led astray suggests that the crisis can't be blamed on the mistakes of a few greedy CEOs -- in my view, there's something fundamentally wrong with current corporate governance structures and the language of corporate management. We just don't have the proper lexicon to have a meaningful discussion about the kinds of risks that typical corporations face today, and we need to create a few field of "risk accounting" to address this gap in GAAP [Generally Accepted Accounting Principles].

Q. Now that the financial landscape has been rearranged, are there things that corporate managers can do to capitalize on the current environment?

A. One of the things companies are surely going to have to deal with over the next year or two is greatly reduced liquidity in the capital markets. Borrowing costs are going to go up, and it's going to be much harder to finance new ventures, so companies will have to be much more creative about rebalancing their pension fund obligations and raising capital to fund operations. Managers should be prepared for some tough times.

At the same time, there's going to be tremendous interest on the part of, say, pension funds in finding new ventures. My guess is that starting this summer, pension funds will begin increasing their allocations to private equity, hedge funds and other alternative investments -- assets will be flowing back into risky ventures with a vengeance. The money that's currently in T-bills has got to go somewhere -- and anybody who has cash is going to be in a great position. Companies are going to have to find creative ways to tap into these nontraditional sources of financing.

Q. What kinds of new market opportunities do you see emerging -- things that aren't typical?

A. Well, if you think about the kind of dislocation that's affected financial markets, you'll see that much of the current crisis stems from the fact that it's very difficult to get information about the value of certain mortgage portfolios because they're so heterogeneous.

What if there was a service like eBay Inc. that provided a price discovery mechanism for these mortgage pools? An eBay for mortgages or mortgage-backed securities -- something that's easy to use and that allows users to value these illiquid securities quickly -- could be an extraordinarily valuable service, particularly if it gains any kind of market share (like eBay). It would allow holders of mortgage-related instruments to post their securities online and allow investors to bid on them. It would show prices on a historical basis so bidders could see how a portfolio of mortgages from a particular region of the country traded four months ago. Like eBay, it would provide a wealth of information and, ultimately, liquidity -- that's the key.

This interview is adapted from "Opportunities Brought to You by Distress" by Bruce G. Posner and Michael S. Hopkins, which appeared in the March 23, 2009, edition of Business Insight, a joint publishing venture between the MIT Sloan Management Review and the Wall Street Journal. The article is also available at http://sloanreview.mit.edu.

A version of this article appeared in MIT Tech Talk on April 1, 2009 (download PDF).