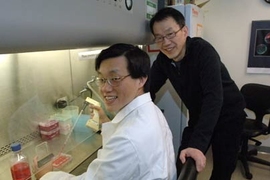 Mice lacking a certain brain protein learn some tasks better but also forget faster, according to new research from MIT that may explain the phenomenon of autistic savants in humans. The work could also result in future treatments for autism and other brain development disorders.

Researchers at the Picower Institute for Learning and Memory at MIT report in the Feb. 13 issue of the Journal of Neuroscience that mice genetically engineered to lack a key protein used for building synapses--the junctions through which brain cells communicate--actually learned a spatial memory task faster and better than normal mice. But when tested weeks later, they couldn't remember what they had learned as well as normal mice, and they had trouble remembering contexts that should have provoked fear.

"These opposite effects on different types of learning are reminiscent of the mixed features of autistic patients, who may be disabled in some cognitive areas but show enhanced abilities in others," said Albert Y. Hung, a postdoctoral associate at the Picower Institute, staff neurologist at Massachusetts General Hospital and co-author of the study. "The superior learning ability of these mutant mice in a specific realm is reminiscent of human autistic savants."

Autism is one of a group of developmental disabilities known as autism spectrum disorders (ASDs), in which a person's ability to communicate and interact with others is impaired. The Centers for Disease Control and Prevention estimate that one in 150 American children have an ASD. Occasionally, an autistic person has an outstanding skill, such as an incredible rote memory or musical ability. Such individuals--like the character Dustin Hoffman played in the film "Rain Man"--may be referred to as autistic savants.

Hung said that while it seems counter-intuitive that loss of an important synaptic scaffold protein would result in improved learning among the mice in this study, the absence of this protein may "trap" the mice's synapses in a more plastic state, which means the synapses are ready to respond to input but not maintain it in long-term memory.

Aberrant synapse development and faulty structure of dendritic spines--tiny protrusions on the surface of neurons that receive messages from other neurons--are often associated with neurodevelopmental disorders, including autism, in humans.

Morgan H. Sheng, the Menicon Professor of Neuroscience, Hung and colleagues investigated the role in brain development and cognitive function of a protein called Shank1. Shank1 is one member of a family of proteins that act as structural scaffolds linking together different components of the synapse. In humans, mutations in the closely related protein Shank3 have been linked to the autism spectrum of disorders characterized by impaired social interaction, absent or delayed language development and repetitive behaviors.

The mice in the study had smaller dendritic spines and weaker brain synapses. Their enhanced spatial learning is similar to that of mice engineered to have a mutation in another protein--neuroligin3--that binds directly to Shank1 and is also associated with autism. "We speculate that enhanced spatial learning might be a common feature of mouse models of autism, and that it might reflect a pathological elevation of brain plasticity in the human disease," Hung and Sheng wrote.

This work was supported by the RIKEN-MIT Neuroscience Research Center, the National Institutes of Health and HHMI.