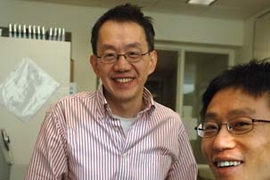 The researchers zeroed in on the enzymes that manipulate a key scaffolding protein for synapses, the connections through which brain cells communicate. Synapses are weakened and lost in neurodegenerative diseases such as Alzheimer's and Parkinson's disease.

"We identified a major underlying mechanism through which synapses are strengthened and maintained," said Morgan H. Sheng, Menicon Professor of Neuroscience at MIT's Picower Institute for Learning and Memory. "The enzymes involved could be good targets for potential drug treatments."

A protein called postsynaptic density-95 (PSD-95) is a key building block of synapses. Like the steel girders in a building, it acts as a scaffold around which other components are assembled. "The more PSD-95 molecules, the bigger and stronger the synapse," said co-author Myung Jong Kim, a Picower research scientist.

In the current study, the researchers identified for the first time the enzymes that work behind the scenes on PSD-95, adding a phosphate group to a specific amino acid in the PSD-95 protein. This process--called phosphorylation--is critical for PSD-95 to do its job in supporting synapses.

"Adding a phosphate group to a single amino acid allows PSD-95 to promote synapse size and strength," said Sheng, who also holds an appointment in MIT's Department of Brain and Cognitive Sciences and is a Howard Hughes Medical Institute investigator. "Therefore, promoting this process could help improve cognitive function."

Sheng believes manipulating PSD-95 through phosphorylation could lead to bigger and more robust synapses, which would boost brainpower in both normal and diseased brains. "It's possible that promoting PSD-95 phosphorylation could also help neuropsychiatric illnesses in which synapse function goes awry, such as schizophrenia, depression and autism," Sheng said.

In addition to Sheng and Kim, authors include Picower research scientist Kensuke Futai; Yasunori Hayashi, MIT assistant professor of neurobiology and RIKEN-MIT investigator; and Jihoon Yu and Kwangwook Cho of the University of Bristol in England.

A version of this article appeared in MIT Tech Talk on November 14, 2007 (download PDF).