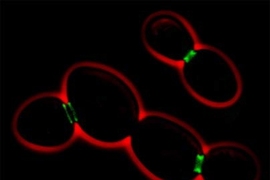 In a finding that may lead to potential new treatments for diseases such as Alzheimer's and Parkinson's, researchers at the Picower Institute for Learning and Memory at MIT report an unexpected role in the brain for a well-known protein.

A study by Morgan H. Sheng, Menicon Professor of Neuroscience and a Howard Hughes Medical Institute investigator, and colleagues appearing in the Oct. 23 issue of Current Biology shows that the same protein that enables a yeast cell to bud into two daughter cells also helps neurons sprout the branch-like protrusions used to communicate with other neurons.

The work revolves around septins--proteins known since the 1970s to play an essential function in the process through which the cytoplasm of a single yeast cell divides. "In yeast, septin is localized exactly at the neck between the yeast mother cell and the bud or emerging daughter cell," Sheng said. "Amazingly, we found septin protein localized at the base of the neck of neuronal dendritic spines and at the branchpoint of dendritic branches."

Nine of the 14 septins found in mammals are found in the brain. One of them, Sept7, appears the most, but its role was unclear. Septins form long filaments and act as scaffolds, recruiting other proteins into their assigned roles of builders of the cell infrastructure.

While neurons don't divide, they do form protrusions that eventually elongate into dendritic branches. Dendrites, from the Greek word for "tree," conduct electrical stimulation from other neurons to the cell body of the neuron from which the dendrites project.

Electrical stimulation is transmitted via synapses, which are located at various points along the dendritic branches. Dendrites play a critical role in receiving these synaptic inputs. "Because dendritic spines are important for synaptic function and memory formation, understanding of septins may help to prevent the loss of spines and synapses that accompanies many neurodegenerative diseases," said co-author Tomoko Tada, a postdoctoral associate in the Picower Institute. "Septin could be a potential target protein to treat these diseases."

Moreover, in the cultured hippocampal neurons the researchers used in the study, septin was essential for normal branching and spine formation. An abundance of septin made dendrites grow and proliferate while a dearth of septin made them small and malformed.

"Boosting septin expression and function would enhance the stability of spines and synapses, and therefore be good for cognitive functions such as learning and memory," Sheng said. His laboratory is now exploring ways to prevent septin degradation and loss.

This work is supported by the National Institutes of Health and the RIKEN-MIT Neuroscience Research Center.