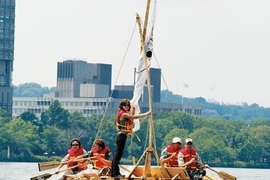 ↓ Download Image
Caption: Professor of Archeology and Ancient Technology Dorothy Hosler, back left on the raft, helps row a raft built by four of her students in 2004. Leslie Dewan, standing, recently worked with Hosler to show how similar rafts carried goods through the Americas before the arrival of the Europeans.
Credits: Photo / Donna Coveney 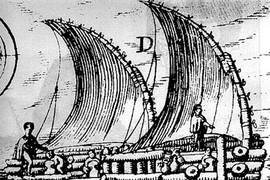 Caption:
Professor of Archeology and Ancient Technology Dorothy Hosler, back left on the raft, helps row a raft built by four of her students in 2004. Leslie Dewan, standing, recently worked with Hosler to show how similar rafts carried goods through the Americas before the arrival of the Europeans.
Credits:
Photo / Donna Coveney

Oceangoing sailing rafts plied the waters of the equatorial Pacific long before Europeans arrived in the Americas, and carried tradegoods for thousands of miles all the way from modern-day Chile to western Mexico, according to new findings by MIT researchers in the Department of Materials Science and Engineering.

Details of how the ancient trading system worked more than 1,000 years ago were reconstructed largely through the efforts of former MIT undergraduate student Leslie Dewan, working with Professor of Archeology and Ancient Technology Dorothy Hosler, of the Center for Materials Research in Archaeology and Ethnology (CMRAE). The findings are being reported in the Spring 2008 issue of the Journal of Anthropological Research.

The new work supports earlier evidence documented by Hosler that the two great centers of pre-European civilization in the Americas--the Andes region and Mesoamerica--had been in contact with each other and had longstanding trading relationships. That conclusion was based on an analysis of very similar metalworking technology used in the two regions for items such as silver and copper tiaras, bands, bells and tweezers, as well as evidence of trade in highly prized spondylus-shell beads.

Early Spanish, Portuguese and Dutch accounts of the Andean civilization include descriptions and even drawings of the large oceangoing rafts, but provided little information about their routes or the nature of the goods they carried.

In order to gain a better understanding of the rafts and their possible uses, Dewan and other students in Hosler's class built a small-scale replica of one of the rafts to study its seaworthiness and handling, and they tested it in the Charles River in 2004. Later, Dewan did a detailed computer analysis of the size, weight and cargo capacity of the rafts to arrive at a better understanding of their use for trade along the Pacific coast.

"It's a nontrivial engineering problem to get one of these to work properly," explained Dewan, who graduated last year with a double major in nuclear engineering and mechanical engineering. Although the early sketches give a general sense of the construction, it took careful study with a computerized engineering design program to work out details of dimensions, materials, sail size and configuration, and the arrangement of centerboards. These boards were used in place of a keel to prevent the craft from being blown to the side, and also provided a steering mechanism by selectively raising and lowering different boards from among two rows of them arranged on each side of the craft.

Although much of the raft design may have seemed familiar to the Europeans, some details were unique, such as masts made from flexible wood so that they could be curved downward to adjust the sails to the strength of the wind, the centerboards used as a steering mechanism, and the use of balsa wood, which is indigenous to Ecuador.

Dewan also analyzed the materials used for the construction, including the lightweight balsa wood used for the hull. Besides having to study the aerodynamics and hydrodynamics of the craft and the properties of the wood, cloth and rope used for the rafts and their rigging, she also ended up delving into some biology. It turns out that one crucial question in determining the longevity of such rafts had to do with shipworms--how quickly and under what conditions would they devour the rafts? And were shipworms always present along that Pacific coast, or were they introduced by the European explorers?

Shipworms are molluscs that can be the width of a quarter and a yard long. "Because balsa wood is so soft, and doesn't have silicates in it like most wood, they are able to just devour it very quickly," Dewan said. "It turns into something like cottage cheese in a short time."

That may be why earlier attempts to replicate the ancient rafts had failed, Dewan said. After construction, those replicas were allowed to sit near shore for weeks before the test voyages. "That's where the shipworms live," Dewan said. "One way to avoid that is to minimize the amount of time spent in harbor."

Dewan and Hosler did a simulation of the amount of time it would take for shipworms to eat one of the rafts and concluded that with proper precautions, it would be possible to make two round-trip voyages from Peru to western Mexico before the raft would need replacing.

The voyages likely took six to eight weeks, and the trade winds only permit the voyages during certain seasons of the year, so the travelers probably stayed at their destination for six months to a year each trip, Dewan and Hosler concluded. That would have been enough time to transfer the detailed knowledge of specific metalworking techniques that Hosler had found in her earlier research.

While Hosler's earlier work had shown a strong likelihood that there had been contact between the Andean and Mexican civilizations, it took the details of this new engineering analysis to establish that maritime trade between the two regions could indeed have taken place using the balsa rafts. "We showed from an engineering standpoint that this trip was feasible," Dewan said. Her analysis showed that the ancient rafts likely had a cargo capacity of 10 to 30 tons--about the same capacity as the barges on the Erie canal that were once a mainstay of trade in the northeastern United States.

Hosler said the analysis is "the first paper of its kind" to use modern engineering analysis to determine design parameters and constraints of an ancient watercraft and thus prove the feasibility of a particular kind of ancient trade in the New World. And for Dewan, it was an exciting departure from her primary academic work. "I just loved working on this project," she said, "being able to apply the mechanical engineering principles I've learned to a project like this, that seems pretty far outside the scope" of her work in nuclear engineering.