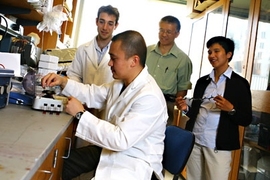 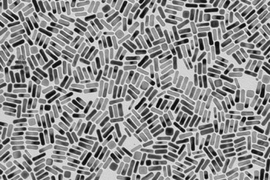 ↓ Download Image
Caption: MIT researchers are working on ways to modify these gold nanorods so they could be used as drug delivery or anti-tumor devices.
Credits: Image / Andy Wijaya

Caption:
MIT researchers are working on ways to modify these gold nanorods so they could be used as drug delivery or anti-tumor devices.
Credits:
Image / Andy Wijaya

The glitter of gold may hold more than just beauty, or so says a team of MIT researchers that is working on ways to use tiny gold rods to fight cancer, deliver drugs and more.

But before gold nanorods can live up to their potential, scientists must figure out how to overcome one major difficulty: The surfaces of the tiny particles are coated with an uncooperative molecule (a byproduct of the synthesis process) that prevents researchers from creating nanorods with the features they want.

"The surface chemistry is really key to everything," said Kimberly Hamad-Schifferli, assistant professor of biological and mechanical engineering at MIT. "For all of these nifty applications to work, someone's got to sit down and do the dirty work of understanding the surface."

Hamad-Schifferli and her colleagues published two papers this month describing ways to manipulate the nanorods' surface, which could allow researchers to design nanorods with specific useful functions.

Before that can happen, scientists must figure out how to deal with an organic molecule known as CTAB that coats the outer surface of gold nanorods and tends to detach from and reattach itself to the surface. The molecule, a byproduct of the synthesis reaction that produces the nanorods, makes it difficult to attach other molecules for delivery, such as drugs or DNA.

The team's two recent papers describe how the CTAB influences heat dissipation and how to remove the CTAB and replace it with another organic molecule.

In the first paper, published online Aug. 12 in the Journal of Physical Chemistry C, they found that a low concentration of the CTAB in the surrounding solution accelerates heat dissipation after the nanorod is hit with infrared light. When the concentration of CTAB is high, heat is dissipated more slowly.

That information could help scientists design nanorods that fight cancer agents by burning away tumor cells when activated with infrared light.

In the second paper, published online Aug. 22 in the journal Langmuir, the team demonstrated how to replace CTAB with a more useful molecule -- a sulfur-containing group known as a thiol. This molecule binds more strongly to the nanorod, so it doesn't detach and reattach like CTAB. In addition, other molecules, such as DNA, can be easily attached to the end of the thiol.

These surface chemistry studies are critical to lay the groundwork for development of gold nanorods, according to Hamad-Schifferli.

"People have dreamed up all of these cool applications for nanorods, but one of the biggest bottlenecks to making this a reality is this interface," she said.

In the future, Hamad-Schifferli and her colleagues hope to build gold nanorods that carry DNA designed for a specific function in the target cell. For example, the DNA could shut down production of a protein that is being overexpressed.

Lead author of the Langmuir paper is Andy Wijaya, a graduate student in chemical engineering.

The work was funded by the Norwegian Research Council, the Ford-MIT Alliance and the National Science Foundation.