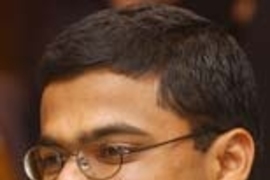 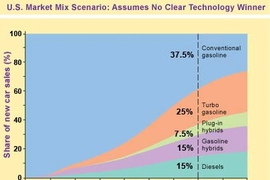 ↓ Download Image
Caption: Chart 1: MIT researchers took into account variables such as consumer buying behavior, fueling infrastructure needs and vehicle manufacturing requirements, and defined market penetration rates for each of the five propulsion technologies they studied. This chart shows one plausible outcome: there is no clear technology winner by 2035 but all gain a fraction of the market. 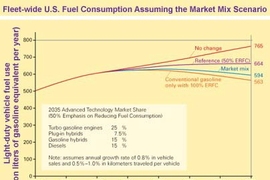 ↓ Download Image
Caption: Chart 2: This chart shows the impact on total fuel use of the market mix shown in Chart 1.

Caption:
Chart 1: MIT researchers took into account variables such as consumer buying behavior, fueling infrastructure needs and vehicle manufacturing requirements, and defined market penetration rates for each of the five propulsion technologies they studied. This chart shows one plausible outcome: there is no clear technology winner by 2035 but all gain a fraction of the market.

Caption:
Chart 2: This chart shows the impact on total fuel use of the market mix shown in Chart 1.

It is possible to slash fuel use by all vehicles on U.S. roads to pre-2000 levels within a few decades, but doing so would require immediate action on several challenging fronts, according to a new analysis by MIT researchers.

Left unchecked, U.S. vehicle fuel use is expected to rise to about 765 billion liters of gasoline equivalent per year by 2035, up 35 percent from 2005, according to the researchers. Their analysis shows, however, that hybrids, plug-in hybrids and other advanced vehicle systems could be incorporated into America's vehicle fleet rapidly enough to make a significant dent in total fuel use by 2035. Reductions would come faster if Americans were to start to use technology improvements to make mainstream gasoline vehicles more fuel efficient, and to adopt measures to slow the growth in demand for vehicles and the distance they travel.

Among the biggest hurdles will be changing consumer expectations.Â In order to make a dent in fuel use, vehicle makers will have toÂ emphasize fuel efficiency over other vehicle improvements. InÂ other words, consumers will need to understand that next year's modelÂ won't necessarily accelerate faster or be bigger than last year'sÂ model, but it will get more miles per gallon.

"The magnitude of the changes required to achieve these reductions is daunting, especially as current trends all run counter to those changes," said Anup Bandivadekar, who until recently was a postdoctoral associate in the MIT Energy Initiative and is now an analyst at the International Council on Clean Transportation. John B. Heywood, the Sun Jae Professor of Mechanical Engineering and director of MIT's Sloan Automotive Laboratory, Bandivadekar and others developed the models key to the study.

Research has shed light on future fuel economy and emissions improvements possible with specific technologies. But knowing the potential impact on total fuel use and emissions requires understanding how quickly those technologies are likely to get on the road, how much difference they will make and when.

Bandivadekar and colleagues set out to answer those questions. "Like everyone else, we don't have the ability to predict the future," said Bandivadekar, who received his PhD from MIT's Engineering Systems Division earlier this year. "So we develop various transportation scenarios, each of which combines a number of vehicle technologies, assuming that their market shares grow at different--but plausible--rates between now and 2035. We then assess the impact of each scenario on fleet-wide fuel use and emissions."

Conversely, given a fuel use or emissions target, their methodology can determine plausible pathways for getting there.

The researchers compared fuel use for different scenarios that would meet projected demand for light-duty vehicles between now and 2035. For each, they assumed that half of all technology improvements would be used directly to increase fuel economy, a variable they call "emphasis on reducing fuel consumption," or ERFC.

In the first scenario, by 2035 the advanced technologies considered in the study--turbocharged gasoline, diesels, gasoline hybrids and plug-in hybrids--have gained fractions of the U.S. market, but over a third of all cars sold are still conventional gasoline internal combustion engine vehicles. In the second, battery development stalls, hybrids remain expensive, but turbocharged gasoline and diesel vehicles do well, taking over 75 percent of the market by 2035. The third scenario assumes that hybrids and plug-in hybrids succeed and by 2035 they make up 55 percent of the market.

The hybrid-strong scenario gives the largest cut in fuel use. Further, if combined with 100 percent ERFC, fuel use in 2035 is almost 40 percent lower than it would be if no action were taken.

"Now you're talking really big reductions," Bandivadekar said. "Despite enormous growth in demand, fuel use in 2035 would be lower than it was in 2000."

The overall message? "If our goal is to achieve deep, long-term reductions in fuel use and emissions we should do all these things--increase the ERFC, improve today's engines, increase the market penetration rate of advanced propulsion technologies and find ways to reduce the rate of growth in demand. With that combination we can get very deep cuts by 2035," Bandivadekar said. "To make those things happen, we need strong, long-term policies and we need to adopt them now because the longer we wait the higher the starting point is and the more difficult the task."

For more information, go to http://web.mit.edu/mitei/research/spotlights/hybrids.html.