MIT: No easy answers in evolution of human language 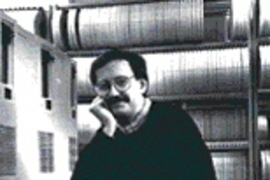 The evolution of human speech was far more complex than is implied by some recent attempts to link it to a specific gene, says Robert Berwick, professor of computational linguistics at MIT.

Berwick will describe his ideas about language in a session at the annual meeting of the American Association for the Advancement of Science on Sunday, Feb. 17. The session is called "Mind of a Toolmaker," and explores the use of evolutionary research in understanding human abilities.

Some researchers in recent years have speculated that mutations in a gene called Foxp2 might have played a fundamental role in the evolution of human language. That was based on research showing that the gene seems to be connected to language ability because some mutations to that gene produce specific impairments to language use, and because our closest living relatives, the chimpanzees, lack both these gene mutations and the capacity for language. But the claim that the gene mutation is directly connected to the development of language is very unlikely to be right, says Berwick, who holds appointments in MIT's Department of Electrical Engineering and Computer Science and Department of Brain and Cognitive Sciences.

"This kind of straightforward connection is just not the way organisms are put together," he says. When it comes to something as complex as language, "one would be hard-pressed to come up with an example less amenable to evolutionary study." And the specific Foxp2 connection is based on a whole chain of events, each of which is speculative, so there's little chance of the whole story being right.

"It's so chaotic, it's like weather forecasting," he says. "The noise overwhelms the signal."

Rather, language is almost certainly the result of a far more complex and subtle interplay among a variety of factors, Berwick says, and it may never be possible to connect it to specific genetic changes. "There are some things in science that are very interesting, but that we're never going to be able to find out about," he says. "It's a sort of romantic view some people have, that anything interesting can be understood."

Even defining something as complicated as language in a precise way is daunting, as ongoing disputes over the significance of language experiments with apes, parrots and dolphins have made clear. Berwick says, "If you can't define what it is, why study it from an evolutionary point of view?"

It's more likely, Berwick says, that the role of the Foxp2 gene in language is somehow peripheral to the capacity for language itself. He compares it to a printer in a computer system--it's part of the overall system, but it's not fundamental. Berwick thinks a more productive approach to studying the evolution of language is to examine it in terms of deeper, internal mechanisms.

Both bird songs and all human languages seem to share some underlying characteristics related to their metrical structure, Berwick says. There's an underlying sing-song beat that is pronounced in poetry, music and in the songs of birds that may reveal a fundamental aspect of how our brains process language. Future research could probe this link further, even looking at possible connections between other specific genes, in both birds and humans, that might be connected to this sense of metrical structure.

Ultimately, the important thing is to understand that language is, at bottom, something that takes place inside the human mind and is independent of any particular sound, sight or motion. The same internal mental construction could be expressed through verbal speech, through writing or through sign language without changing its basic nature, Berwick says. "It's not about this external thing you hear," he says. "It's about the representation inside your head."