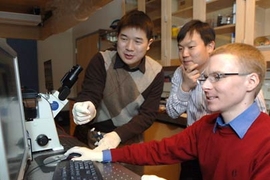 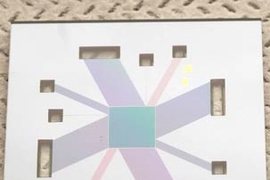 Caption:
The MIT researchers' "microsieve" promises to improve the sorting of biomolecules such as proteins.
Credits:
Image courtesy / Jongyoon Han

A new MIT microchip system promises to speed up the separation and sorting of biomolecules such as proteins. The work is important because it could help scientists better detect certain molecules associated with diseases, potentially leading to earlier diagnoses or treatments.

The microchip system has an extremely tiny sieve structure built into it that can sort through continuous streams of biological fluids and separate proteins accurately by size. Conventional separation methods employ gels, which are slower and more labor-intensive to process. The new microchip system could sort proteins in minutes, as compared to the hours necessary for gel-based systems.

The MIT team's results appear in the Feb. 5 issue of Nature Nanotechnology.

The new technology is an advance from a one-dimensional sieve structure reported by the same MIT group last year. The key to this new advance, called an anisotropic nanofluidic sieving structure, is that the researchers have designed the anisotropic sieve in two orthogonal dimensions (at a right angle), which enables rapid continuous-flow separation of the biological sample. This allows continuous isolation and harvesting of subsets of biomolecules that researchers want to study. And that increases the probability of detecting even the smallest number of molecules in the sample.

"With this technology we can isolate interesting proteins faster and more efficiently. And because it can process such small biologically relevant entities, it has the potential to be used as a generic molecular sieving structure for a more complex, integrated biomolecule preparation and analysis system," said Jongyoon Han, the Karl Van Tassel Associate Professor of Electrical Engineering and associate professor of biological engineering at MIT and head of the MIT team.

Han's coauthors of the Nature Nanotechnology paper are co-lead authors Jianping Fu, a Ph.D. candidate in the Department of Mechanical Engineering, and Reto B. Schoch, a postdoctoral associate in the Research Laboratory of Electronics (RLE). Additional authors are Anna Stevens, a postdoctoral associate in the Harvard-MIT Division of Health Sciences and Technology, and Professor Steven Tannenbaum of MIT's Biological Engineering Division.

Han noted that until the late 1990s, most advances in biological laboratory equipment were aimed at the Human Genome Project and discoveries related to DNA, which are larger molecules compared to proteins. However, because of the vital role proteins play in almost all biological processes, researchers began to focus their attention on proteins. But one obstacle has been the lack of good laboratory tools with which to prepare biological samples to analyze proteins, said Han, who also has affiliations in MIT's RLE, Computational and Systems Biology Initiative, Center for Materials Science and Engineering and Microsystems Technology Laboratories.

"I shifted my attention from DNA into the area of protein separation around 2002 with the shift to proteomics (the study of proteins)," Han said. "But the field was using decades-old gel electrophoresis technology. There is a big gap in the need for technology in this area."

Han and Fu therefore devised the anisotropic sieve that is embedded into a silicon chip. A biological sample containing different proteins is placed in a sample reservoir above the chip. The sample is then run through the sieve of the chip continuously. The chip is designed with a network of microfluidic channels surrounding the sieve, and the anisotropy (directional property) in the sieve causes proteins of different sizes to follow distinct migration trajectories, leading to efficient continuous-flow separation. The current sieve has an array of nanofluidic filters of about 55 nanometers, or billionths of a meter, wide.

"The proteins to be sorted are forced to take two orthogonal paths. Each path is engineered with different sieving characters. When proteins of different sizes are injected into the sieve under applied electric fields, they will separate into different streams based on size," Han explained. At the bottom of the chip the separated proteins are collected in individual chambers. Scientists then can test the proteins.

While other scientists have used similar continuous flow techniques to separate large molecules like long DNA, the MIT team succeeded with the tinier proteins. "This is the first time physiologically relevant molecules like proteins have been separated in such a manner," said Han. "We can separate the molecules in about a minute with the current device versus hours for gels."

Another advantage of the microchip is that it can have so many different pore sizes, and unlike gels, it is possible to design an exact pore size to increase the separation accuracy. That in turn can help researchers look for so-called biomarkers, or proteins that can reveal that disease is present, and thus help researchers develop diagnostics and treatments for the disease. "Sample preparation is critical in detecting more biomarker signals," said Han.

Funding came from the National Science Foundation, the National Institutes of Health and the Singapore-MIT Alliance.