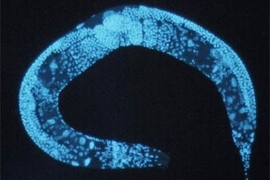 The last few years have been very good to ribonucleic acid (RNA). Decades after DNA took biology by storm, RNA was considered little more than a link in a chain--no doubt a necessary link, but one that, by itself, had little to offer. But with the discoveries of RNA interference and microRNAs, this meager molecule has been catapulted to stardom as a major player in genomic activity.

Now, a team of scientists led by David Bartel, a professor in MIT's Department of Biology, has discovered an entirely new class of RNA molecules.

Reporting in the journal Cell, the team describes identifying more than 5,000 of these new molecules, termed 21U-RNAs, in the C. elegans worm. These new RNAs are named after their distinctive features: Each molecule contains 21 chemical building blocks (or nucleotides), and each begins with the chemical uridine, represented by the letter U (the only RNA nucleotide not also found on DNA). In addition, each of the 5,000 different 21U-RNA molecules comes from one of two chromosomal regions.

Further, "we can predict where additional 21U-RNA genes might reside," says Bartel, who is also a member of the Whitehead Institute for Biomedical Research and a Howard Hughes Medical Institute investigator. "Combining these predictions with the 5,000 (21U-RNAs) that we experimentally identified, we suspect that there are more than 12,000 different 21U-RNA genes in the genome." Because each gene typically produces a unique 21U-RNA, a very large diversity of molecules is made.

"There are so many 21U-RNA genes spread out over such a wide swath of the genome, but they all share common requirements for expression and common structural features," says Bartel lab Ph.D. student J. Graham Ruby, lead author on the paper.

Although the researchers haven't yet identified a particular function for these molecules, they believe that this uniform structure strongly indicates an important role.

MIT Institute Professor and Nobel Laureate Phillip Sharp, a biologist who was not part of the research team, supports this hypothesis. The fact that 21U-RNAs share this "common structure and origin suggests an important function," he says. "It requires function to conserve specificity."

Other members of the research team are affiliated with the Broad Institute of MIT and Harvard and Pennsylvania State University. This research was supported by the Prix Louis D from the Institut de France and a grant from the National Institutes of Health.

A version of this article appeared in MIT Tech Talk on January 24, 2007 (download PDF).