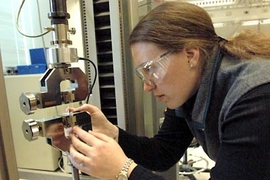 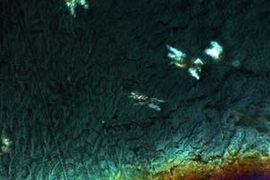 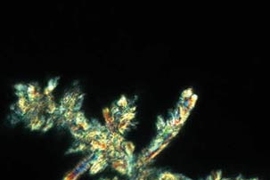 ↓ Download Image
Caption: A zoomed view of a bright, ordered domain in the nanocomposite. Upon heating to temperatures above 120 degrees Celsius, the bright domains disappear. But upon annealing the material at 60 degrees C for 68 hours, the bright domains re-appear. Image width=0.18 mm.
Credits: Image courtesy / Gareth McKinley Lab

Caption:
A zoomed view of a bright, ordered domain in the nanocomposite. Upon heating to temperatures above 120 degrees Celsius, the bright domains disappear. But upon annealing the material at 60 degrees C for 68 hours, the bright domains re-appear. Image width=0.18 mm.
Credits:
Image courtesy / Gareth McKinley Lab

Creating artificial substances that are both stretchy and strong has long been an elusive engineering goal. Inspired by spider silk, a naturally occurring strong and stretchy substance, MIT researchers have now devised a way to produce a material that begins to mimic this combination of desirable properties.

Such materials, known as polymeric nanocomposites, could be used to strengthen and toughen packaging materials and develop tear-resistant fabrics or biomedical devices. Professor Gareth McKinley, graduate student Shawna Liff and postdoctoral researcher Nitin Kumar worked at MIT's Institute for Soldier Nanotechnologies (ISN) to develop a new method for effectively preparing these materials. The research appears in the January issue of Nature Materials.

Engineers are already able to create materials that are either very strong or very stretchy, but it has been difficult to achieve both qualities in the same material. In the last few years scientists have determined that the secret behind the combined strength and flexibility of spider silk lies in the arrangement of the nano-crystalline reinforcement of the silk while it is being produced.

"If you look closely at the structure of spider silk, it is filled with a lot of very small crystals," says McKinley, a professor of mechanical engineering. "It's highly reinforced."

The silk's strength and flexibility come from this nanoscale crystalline reinforcement and from the way these tiny crystals are oriented towards and strongly adhere to the stretchy protein that forms their surrounding polymeric matrix.

Liff, a Ph.D. student in mechanical engineering, and Kumar, a former MIT postdoctoral associate, teamed up to figure out how to begin to emulate this nano-reinforced structure in a synthetic polymer (A polymer or plastic consists of long chains composed of small repeating molecular units). Numerous earlier unsuccessful attempts, tackling the same issue, relied on heating and mixing molten plastics with reinforcing agents, but Liff and Kumar took a different approach: They focused on reinforcing solutions of a commercial polyurethane elastomer (a rubbery substance) with nanosized clay platelets.

They started with tiny clay discs, the smallest they could find (about 1 nanometer, or a billionth of a meter thick and 25 nanometers in diameter). The discs are naturally arranged in stacks like poker chips, but "when you put them in the right solvent, these 'nanosized poker chips' all come apart," said McKinley.

The researchers developed a process to embed these clay chips in the rubbery polymer--first dissolving them in water, then slowly exchanging water for a solvent that also dissolves polyurethane. They then dissolved the polymer in the new mixture, and finally removed the solvent. The end result is a "nanocomposite" of stiff clay particles dispersed throughout a stretchy matrix that is now stronger and tougher.

Importantly, the clay platelets are distributed randomly in the material, forming a structure much like the jumble that results when you try to stuff matches back into a matchbox after they have all spilled out.
Instead of a neatly packed arrangement, the process results in a very disorderly "jammed" structure, according to McKinley. Consequently the nanocomposite material is reinforced in every direction and the material exhibits very little distortion even when heated to temperatures above 150 degrees Celsius.

In a Nature Materials commentary that accompanied the research paper, Evangelos Manias, professor of materials science and engineering at Pennsylvania State University, suggests that "molecular composites" such as those developed by the MIT group are especially suitable for new lightweight membranes and gas barriers, because the hard clay structure provides extra mechanical support and prevents degradation of the material even at high temperatures. One possible use for such barriers is in fuel cells.

The U.S. military is interested in such materials for use in possible applications such as tear-resistant films or other body-armor components. The military is also interested in thinner, stronger packaging films for soldiers' MREs (meals ready to eat) to replace the thick and bulky packaging now used.

Fabric companies have also expressed interest in the new materials, which can be used to make fibers similar to stretchy compounds such as nylon or Lycra. The new approach to making nanocomposites can also be applied to biocompatible polymers and could be used to make stents and other biomedical devices, McKinley said.

The research was funded by the U.S. Army through MIT's Institute for Soldier Nanotechnologies and by the National Science Foundation. McKinley's team was assisted by technical staff at the ISN, including research engineer Steven Kooi, who helped prepare special samples for transmission electron microscopy.

A version of this article appeared in MIT Tech Talk on January 24, 2007 (download PDF).