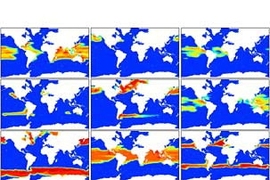 Caption:
Image above shows the emergent ocean ecosystem community structure. The phytoplankton community is organized according to relative fitness in the physical, chemical, and predatory environment.
Credits:
Image / Stephanie Dutkiewicz

A new program to develop computational models of how marine microbes live and evolve in the global ocean has been launched with a $3.7 million gift from the Gordon and Betty Moore Foundation.

The program is important because it will help researchers understand and simulate the relationships between climate change, marine ecosystems and the ocean carbon cycle.

In the March 30 issue of Science, an MIT team describes the first of these models.

The MIT Darwin Project is developing novel computer models of marine microbial communities in which a diverse range of organisms are explicitly represented. In these models, ecosystem structure is an emergent property determined by the relative fitness of the simulated organisms in specific physical, chemical and predatory environments.

The modeled ecosystem self-organizes in an analogy of natural selection.

The MIT Darwin Project is a collaboration between affiliates of the Earth System Initiative (ESI) and the Computational and Systems Biology Initiative (CSBi). It is a new model for cross-disciplinary research at MIT, connecting systems biology, microbial ecology, global biogeochemical cycles and climate.

Principal investigator Michael Follows, a principal research scientist in the Department of Earth, Atmospheric and Planetary Sciences, was inspired to develop this approach after hearing Professor Penny Chisholm present her genomic studies of phytoplankton at an ESI retreat. Chisholm is the Lee and Geraldine Martin Professor of Environmental Studies in the Departments of Civil and Environmental Engineering and Biology.

Chisholm's group monitors the abundance and variations of the phytoplankton prochlorococcus in the worlds' oceans. Her team has identified fine-scale genetic variants at the sub-species level that also have distinct oceanic distributions and physiological attributes.

"We face a significant challenge in trying to understand and simulate the relationships between climate change, marine ecosystems and the ocean carbon cycle. These new observations and models can help to do so," said Follows.

Modeling the regulation of global elemental cycles by marine microbial communities requires a detailed understanding of the physical and chemical environment, the molecular and cellular scale processes that dictate the response of an individual cell to that environment, and the organization of communities of organisms within that environment.

"The Darwin Project is the place where all these things meet. The understanding of the biologist and the ecologist merges with the geochemist and the physical oceanographer and it is exciting to develop a framework in which that can happen," Follows said.

Said MIT Professor Bruce Tidor, "The Darwin Project integrates measurement, mechanism and understanding across a vast range of scales using models to connect underlying processes. It is as much a study in how to leverage new knowledge and understanding as it is a study of the relationships among marine microbes, ocean circulation and global biogeochemical cycles." Tidor has appointments in the Department of Electrical Engineering and Computer Science and the Biological Engineering Division, and he is the co-director for education, outreach and community for CSBi.

Chisholm is equally excited about the project, noting that it represents the type of project that ESI was designed to foster. "It is extreme cross-scale, multidisciplinary research--from genomes to biomes--that would not be easily launched within traditional departmental boundaries," she says.

In addition to Follows and Tidor, the Darwin Project team also includes marine microbiologist Ed Delong from the Biological Engineering Division and the Department of Civil and Environmental Engineering, and oceanographers John Marshall, Chris Hill and Stephanie Dutkiewicz from the Department of Earth, Atmospheric and Planetary Sciences.

The Gordon and Betty Moore Foundation gift will fund new postdoctoral scientists and graduate students to help develop the models of microbes in the world's oceans. It will also fund new computing infrastructure to support these activities, including a new parallel processing computational cluster, a massive data storage system, a room-sized data visualization facility and a connection for MIT to the National Lambda Rail, a nationwide high-speed fiber optic data network.