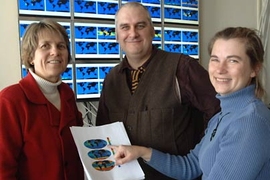 Scientists at MIT have created an ocean model so realistic that the virtual forests of diverse microscopic plants they "sowed" have grown in population patterns that precisely mimic their real-world counterparts.

This model of the ocean is the first to reflect the vast diversity of the invisible forests living in our oceans--tiny, single-celled green plants that dominate the ocean and produce half the oxygen we breathe on Earth. And it does so in a way that is consistent with the way real-world ecosystems evolve according to the principles of natural selection.

Scientists use models such as this one to better understand the oceans' biological and chemical cycles and their role in regulating atmospheric carbon dioxide, an important greenhouse gas.

The output of the new model, the brainchild of oceanographer Mick Follows, has been tested against real-world patterns of a particular species of phytoplankton, called prochlorococcus, which dominates the plant life of some ocean regions.

"The guiding principle of our model is that its ecosystems are allowed to self-organize as in the natural world," said Follows, a principal research scientist in MIT's Department of Earth, Atmospheric and Planetary Sciences (EAPS), lead author on the paper and creator of the model. "The fact that the phytoplankton that emerge in our model are analogous to the real phytoplankton gives us confidence in the value of our approach."

One of Follows' collaborators, Penny Chisholm, the Lee and Geraldine Martin Professor of Civil and Environmental Engineering and Biology and director of the Earth Systems Initiative, has made prochlorococcus her focus of study for 20 years. Stephanie Dutkiewicz, a research scientist in EAPS, and Scott Grant, a graduate student at the University of Hawaii, who was an MIT physics undergraduate during this project, collaborated with Chisholm and Follows on the new model.

Chisholm believes that because previous ocean models did not convey the diversity of phytoplankton, they did not well represent the systems they modeled. The new model remedies that.

"Now we are finally modeling the ocean systems in a way that is consistent with how biologists think of them--water filled with millions of diverse microbes that wax and wane in relative abundance through interactions with each other, and the environment, as dictated by natural selection," said Chisholm.

Indeed the guiding principle of the new model is natural selection. It simulates the physical and chemical characteristics of the oceans, but adds to the virtual soup about 100 random types of phytoplankton. The model randomly generates the single-celled plants, which differ primarily in their size, and in their sensitivity to light, temperature and nutrient availability, then allows the ocean to self-select those most fit for survival in any particular area.

What emerged after the model completed its 10-year virtual evolution --which took four to five days on a cluster of parallel computers--is a phytoplankton community with members that are characteristic of observed phytoplankton communities, including plants similar to prochlorococcus that are extremely abundant in the warm mid-latitude Atlantic and Pacific oceans.

Chisholm said this is the first major change in the way scientists approach ocean models in many years. She believes it will serve to break down disciplinary barriers between the physical and biological ocean sciences.

Follows attributes this new approach to three factors: the emergence of new information about the genetic diversity of marine microbes, recent advances in computational capability and a simple recognition of his own bias.

"Physicists, like myself, have a bit of a reductionist view. We often shy away from the complexity of the real world in our models and prefer to reduce things to the simplest case with fewest factors," said Follows, who went through a sort of conceptual evolution after collaborating with Chisholm for several years. "I finally said, 'Yes, real world ecosystems are messy and complex. But let's embrace it.'"

The Paradigm Consortium of the National Ocean Partnership Program, the National Science Foundation, the Department of Energy, the Gordon and Betty Moore Foundation, and the MIT Global Habitat Longevity Award provided funding for the research.

Chisholm, Follows and Dutkiewicz plan to use this new type of model to look in more detail at what shapes the habitats of the phytoplankton and to link this to other, larger scientific issues about oceans, the plants and creatures living in them and global climate.

"This is just the beginning," said Chisholm. "Now we can begin to ask the model questions and test hypotheses about the role of oceanic microbes in global processes. This will help guide decisions about responsible use of the oceans in this era of global change."