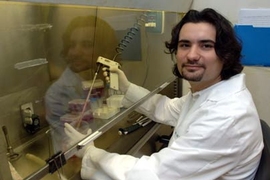 ↓ Download Image
Caption: Andrea Ventura, an MIT postdoctoral associate, works in the lab at the Center for Cancer Research. He and his colleagues have shown that by reactivating a certain gene, cancerous tumors in mice can be drastically reduced in size.
Credits: Photo / Donna Coveney

Caption:
Andrea Ventura, an MIT postdoctoral associate, works in the lab at the Center for Cancer Research. He and his colleagues have shown that by reactivating a certain gene, cancerous tumors in mice can be drastically reduced in size.
Credits:
Photo / Donna Coveney

Many cancers arise due to defects in genes that normally suppress tumor growth. Now, for the first time, MIT researchers have shown that re-activating one of those genes in mice can cause tumors to shrink or disappear.

The study offers evidence that the tumor suppressor gene p53 is a promising target for human cancer drugs.

"If we can find drugs that restore p53 function in human tumors in which this pathway is blocked, they may be effective cancer treatments," said David Kirsch of MIT's Center for Cancer Research and Harvard Medical School, one of the lead co-authors of the paper.

The study is published in the Jan. 24 online edition of Nature. It was conducted in the laboratory of Tyler Jacks, director of the Center for Cancer Research, the David H. Koch Professor of Biology and a Howard Hughes Medical Institute investigator.

P53 has long been known to play a critical role in the development of many tumors--it is mutated in more than 50 percent of human cancers. Researchers have identified a few compounds that restore p53 function, but until now, it has not been known whether such activity would actually reverse tumor growth in primary tumors.

The new MIT study shows that re-activating p53 in mouse tumors dramatically reduces the size of the tumors, in some cases by 100 percent.

"This study provides critical genetic evidence that continuous repression of a tumor suppressor gene is required for a tumor to survive," said Andrea Ventura, an Italian postdoctoral associate in the Center for Cancer Research and first author of the paper.

In normal cells, p53 controls the cell cycle. In other words, when functioning properly, it activates DNA repair mechanisms and prevents cells with damaged DNA from dividing. If DNA damage is irreparable, p53 induces the cell to destroy itself by undergoing apoptosis, or programmed cell death.

When p53 is turned off by mutation or deletion, cells are much more likely to become cancerous, because they will divide uncontrollably even when DNA is damaged.

In this study, the researchers used engineered mice that had the gene for p53 turned off. But, they also included a genetic "switch" that allowed the researchers to turn p53 back on after tumors developed.

Once the switch was activated, p53 appeared in the tumor cells and the majority of the tumors shrank between 40 and 100 percent.

The researchers looked at two different types of cancer--lymphomas and sarcomas. In lymphomas, or cancers of the white blood cells, the cancer cells underwent apoptosis within 1 or 2 days of the p53 reactivation.

In contrast, sarcomas (which affect connective tissues) did not undergo apoptosis but went into a state of senescence, or no growth. Those tumors took longer to shrink but the senescent tumor cells were eventually cleared away.

The researchers are not sure why these two cancers are affected in different ways, but they have started trying to figure it out by identifying the other genes that are activated in each type of tumor when p53 turns back on.

The study also revealed that turning on p53 has no damaging effects in normal cells. The researchers had worried that p53 would kill normal cells because it had never been expressed in those cells.

"This means you can design drugs that restore p53 and you don't have to worry too much about toxic side effects," said Ventura.

Possible therapeutic approaches to turn on p53 in human cancer cells include small molecules that restore mutated p53 proteins to a functional state, as well as gene therapy techniques that introduce a new copy of the p53 gene into tumor cells. One class of potential drugs now under investigation, known as nutlins, acts by interfering with MDM2, an enzyme that keeps p53 levels low.

In follow-up studies, the MIT researchers are looking at other types of cancer, such as epithelial (skin) cancer, in their mouse model, and they plan to see if the same approach will also work for tumor suppressors other than p53.

This research was funded by the Howard Hughes Medical Institute, the National Cancer Institute, the American Italian Cancer Research Foundation and the Leaf Fund.

Other authors on the paper are Margaret McLaughlin, a former postdoc in Jacks' lab, now at Novartis; David Tuveson, also a former postdoc, now group leader at the Cambridge Research Institute (United Kingdom); Laura Lintault, a research affiliate in the Center for Cancer Research; Jamie Newman, graduate student in MIT's Department of Biology; Elizabeth Reczek, a former graduate student in Jacks' lab, now a postdoctoral fellow at Brigham and Women's Hospital; Ralph Weissleder, a professor of radiology at Harvard Medical School and director of the Center for Molecular Imaging Research; and Jan Grimm, a former postdoc in Weissleder's lab, now at Memorial Sloan Kettering Cancer Center.