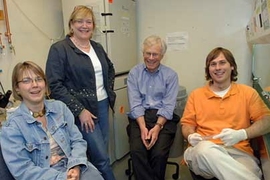 In the daunting marathon that leads to successful drugs, promising drug candidates must pass toxicity tests before entering clinical trials. Researchers from MIT and the Whitehead Institute have developed a cell culture test for assessing a compound's genetic toxicity that may prove dramatically cheaper than existing animal tests. This assay would allow genetic toxicity to be examined far earlier in the drug development process, making it much more efficient.

Like the current FDA-approved test, the new test looks for DNA damage in red blood cells formed in the bone marrow of mice. The precursors to red blood cells are handy for this because such cells normally lose their nucleus during the last stage of red cell formation, and DNA-damaged precursors generate red blood cells containing an easily detected "micronucleus" consisting of fragments of nuclear DNA. Unlike the current procedure, which injects the compound into a live mouse, the new assay is a cell-culture system that could allow hundreds or thousands of tests to be performed from the bone marrow of a single mouse, and potentially from human bone marrow.

Joe Shuga, the graduate student in chemical engineering who developed the assay, is in the unusual position of being a graduate student in three labs, those of Professors Linda Griffith, Harvey Lodish (a Whitehead member) and Leona Samson. "We're all faculty in the biological engineering department, and collaborative projects like this are what the department was intended to do," says Griffith, senior author of a paper on the work to be published online in the Proceedings of the National Academy of Science the week of May 14.

"This is an example of taking fundamental lab science and doing something useful with it," says Lodish, whose lab has extensively studied the process by which red blood cells are generated. Shuga first worked with postdoctoral researcher Jing Zhang in the Lodish lab to adapt techniques from an established cell-culture system based on mouse fetal liver cells to create a new system based on adult red cell precursors from mouse bone marrow. Shuga patiently optimized the system, which allows the precursor cells to proliferate and differentiate in the normal way, dividing four or five times before losing their nucleus and becoming immature red blood cells.

Shuga then studied the way these developing cells reacted to three toxic DNA- damaging agents whose effects had been studied by Samson's lab and found the results correlated well with results from the existing test. Additionally, he experimented with mutant mice created by Samson's lab that are deficient in certain DNA-repair systems. The bone marrow cells derived from these mice, and the cells cultured from that bone marrow, proved more sensitive to the toxic agents than were the cultured cells from normal mice, further confirming the results.

"This is a much cheaper assay that's at least as predictive as previous assays," emphasizes Griffith, "and drug developers can afford to use it a lot earlier in the drug development process."

It also could help to avoid issues with animal testing. "The European Union is trying to minimize animal testing," Shuga points out. "A ban on animal testing of cosmetic products goes into effect in 2009."

Next steps in the research, which may be carried out by industry partners, will be to test the assay in rats and other organisms, and with a wide variety of other toxic chemicals.

"This research is the first stage in a new type of clinical drug toxicity test," says Lodish. "And although we haven't done it, you may be able to extend the technique to humans. Humans are the gold standard in that one wants an assay that directly predicts toxicity in humans, not animals, and you could obtain human bone marrow that's left over from medical procedures."

"If you could change the micronucleus assay to have a human cell readout, that would be pretty amazing," says Samson. Down the road, she suggests, such a test might offer a new way to examine how different individuals respond to chemotherapeutic agents.

"The presumption is that, for some biological processes, in vitro human models could be closer to in vivo human than in vivo mouse," notes Shuga. "That premise will be tested in coming years as new systems become available."

This work was funded by the Cambridge-MIT Institute, Amgen, the National Institutes of Health and the National Science Foundation.