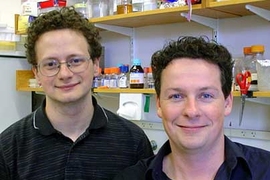 Biologists have long thought that a simple on/off switch controls most genes in human cells. Flip the switch and a cell starts or stops producing a particular protein. But new evidence suggests that this model is too simple and that our genes are more ready for action than previously thought.

Scientists in the lab of MIT biology professor and Whitehead Institute member Richard Young have discovered that many human genes hover between "on" and "off" in any given cell. According to the study, which appears online in Cell on July 12, these genes begin making RNA templates for proteins--a process termed transcription--but fail to finish. The templates never materialize, and the proteins never appear.

"Surprisingly, about one-third of our genes, including all the regulators of cell identity, fall into this new class," says Young. "It seems awfully risky for an adult cell to leave genes primed that could change its identity."

The human body comprises more than 200 types of cells. Each cell contains the same complete set of genes, but expresses only a unique fraction of them, churning out proteins that make it a nerve or skin or white blood cell. Scientists have known for years that a cell hides the genes it doesn't need by coiling the dormant DNA tightly around protein spools called histones. The new study, however, suggests that DNA packaging stays loose at the beginning of many inactive genes, contrary to textbook models.

Further experiments confirmed that the majority of inactive genes undergo "transcriptional tryouts." They begin making RNA, but never complete the job. Apparently, most of an inactive gene remains tightly coiled around histones, which prevent the RNA transcriptional machinery from progressing along the DNA.

"These genes are like cars revving their engines before the beginning of a race," Guenther explains. "They're not parked in a garage with their engines off. They're at the starting gate, waiting for a flag that says 'go.'"

These overzealous "cars" include all the genes responsible for directing cells along particular developmental paths--master regulators that should have no reason for gearing up in healthy specialized cells. Activating such genes might cause a cell to assume new properties. This vulnerability to metamorphosis could help explain why some cells acquire new, unhealthy states in cancer, autoimmune diseases, diabetes and other illnesses.

It could also explain why researchers--including MIT biology professor and Whitehead member Rudolf Jaenisch, who is also an author of the latest study--were recently able to convert mouse adult skin cells to embryonic stem cells by simply introducing four key genes. Given the right signals, inactive developmental regulators primed for transcription could roar to life.

"This is a new model for regulation of the developmental regulators," Young maintains. "It could bring us a step closer to reprogramming cells in a controlled fashion, which has important applications for regenerative medicine."

This research is funded by the National Institutes of Health.