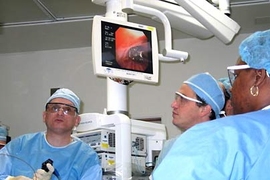 Medical lasers are like science fiction heat rays that can vaporize tumors. The problem has been getting the lasers to where they are needed inside the body while protecting healthy tissue.

Now "perfect mirror" technology, developed by MIT researchers, is being used to shoot a laser through a spaghetti-thin, flexible fiber to attack tumors and other diseased tissue in highly targeted, minimally invasive surgery.

OmniGuide fiber, licensed through MIT's Technology Licensing Office, scored a world first at Brigham and Women's Hospital in Boston last October when thoracic surgeon Dr. Raphael Bueno used it to shrink a patient's cancerous lung tumor by 90 percent. Although carbon dioxide lasers have been used for more than 30 years to surgically remove diseased tissue in the throat, larynx, intestines and elsewhere, there was no easy way to get the lasers inside the body. Extensive surgery was required.

"The OmniGuide fiber gives us a tremendous advantage in treating lung cancer patients, many of whom have limited options because of the sensitive locations of their tumors," Bueno said. Existing laser technologies are considered too risky for some patients because they can penetrate up to a centimeter beyond their placement, jeopardizing organs close to the tumor, including the heart, Bueno said.

The connection with Bueno was facilitated through the Center for the Integration of Medicine and Innovative Technology (CIMIT), a consortium involving MIT, Harvard Medical School and the leading teaching hospitals affiliated with HMS. Bueno first heard about the technology at CIMIT's 2003 annual conference in a lecture series focused on new technologies for surgical applications.

While the familiar metallic mirror is omnidirectional, which means it reflects light from every angle, it also absorbs a significant portion of the incident light. The new kind of mirror developed by the MIT team can reflect light from all angles and polarizations, just like metallic mirrors, but does so with much higher efficiency. In addition, the mirrors can be "tuned" to reflect certain wavelength ranges and transmit the rest of the spectrum, making them omnidirectional reflectors.

In 2002 a team from Fink's laboratory published an article in the journal Nature showing that it was possible to form an omnidirectional perfect mirror into a "pipe" surrounding a hollow core. The mirror's creators then developed a process for making hollow-core fibers that are as thin as spaghetti and transport a beam of intense laser light for meters.

Less than two years later, the fiber was used for the first time in an experimental surgery at Wake Forest Hospital in North Carolina. The U.S. Food and Drug Administration approved the OmniGuide's flexible fiber laser in May 2005, leading the way for its use in treating a growing number of patients at otolaryngology and head and neck clinics and hospitals around the country. It has been used in more than 40 procedures.

"To the best of our knowledge, this is the first-ever FDA clearance for photonic bandgap technology in a surgical system," said Fink, who helped develop the perfect mirror as an MIT graduate student. "From the publication of the study in Nature to the first operation in a patient took less than two years. Many times the development of a novel therapeutic tool -- from concept to paper to patient -- takes 10 years and costs many millions of dollars. Here, we're excited to show an example to the contrary."

"I am very excited about this technology because it liberates me from the limitations of the traditional 'line-of-sight' laser beam," said Dr. Chris Holsinger of the University of Texas M.D. Anderson Cancer Center. "In the head and neck, with its complex 3-D anatomy, the ability to use the laser as I would manipulate a scalpel in three-dimensional space represents a dramatic step forward."

OmniGuide Inc., based in Cambridge, Mass., was co-founded by Fink, Joannopoulos, Thomas and Uri Kolodny, who has an M.B.A. from the Sloan School of Management. The company was backed by MIT alumnus and donor Ray Stata, founder of Analog Devices, who also served as OmniGuide acting CEO.

A version of this article appeared in MIT Tech Talk on April 5, 2006 (download PDF).