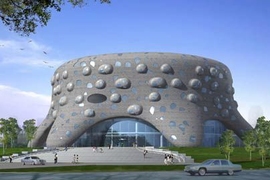 ↓ Download Image
Caption: Sloan Kulper (S.B. 2003) and Audrey Roy (S.B. 2005) have designed a building in the shape of a cell for the Institute for Nanobiomedical Technology and Membrane Biology in Chengdu, China. This illustration shows the exterior in daytime. Protrusions in the facade provide meeting areas attached directly to interior laboratories.
Credits: Image courtesy / Sloan Kulper, Audrey Roy, and Shuguang Zhang 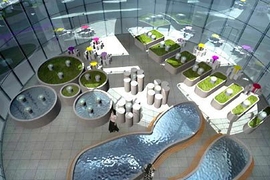 ↓ Download Image
Caption: The garden inside the cell-shaped building designed by Sloan Kulper (S.B. 2003) and Audrey Roy (S.B. 2005) would include such biologically inspired features as pools in the shape of endosomes, left, and mitochondria.
Credits: Image courtesy / Sloan Kulper, Audrey Roy, and Shuguang Zhang 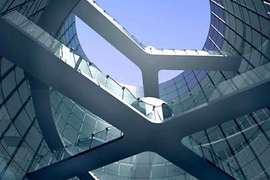 Caption:
Sloan Kulper (S.B. 2003) and Audrey Roy (S.B. 2005) have designed a building in the shape of a cell for the Institute for Nanobiomedical Technology and Membrane Biology in Chengdu, China. This illustration shows the exterior in daytime. Protrusions in the facade provide meeting areas attached directly to interior laboratories.
Credits:
Image courtesy / Sloan Kulper, Audrey Roy, and Shuguang Zhang

Caption:
The garden inside the cell-shaped building designed by Sloan Kulper (S.B. 2003) and Audrey Roy (S.B. 2005) would include such biologically inspired features as pools in the shape of endosomes, left, and mitochondria.
Credits:
Image courtesy / Sloan Kulper, Audrey Roy, and Shuguang Zhang

An innovative cell-shaped building will house a new biomedical research institute in Chengdu, China, thanks to an unusual crossdisciplinary collaboration between Shuguang Zhang, a world-renowned bioengineer and scientist at MIT, his former student, architecture major Sloan Kulper, and computer science and electrical engineering major Audrey Roy.

Kulper (S.B. 2003) and Roy (S.B. 2005) designed the cell-shaped building for the Institute for Nanobiomedical Technology and Membrane Biology in Chengdu, China, the regional capital of Sichuan province in southwestern China. The proposed new facility will contain 170,000 square feet of laboratory, research and meeting spaces; it is slated for construction over the next three years. The building is intended to look like a cell from the outside and to include an assortment of forms inspired by molecular biology inside.

Shuguang Zhang, associate director of the Center for Biomedical Engineering, will serve as founding advisor of the new Nanobiomedical Institute, to be sited at Chengdu's Sichuan University, where Zhang received his undergraduate degree in biochemistry.

In the class, Zhang frequently discusses the striking similarities between architecture and biological structures, he said. "Nature has produced abundant magnificent, intricate and fine molecular and cellular structures through billions of years of molecular selection and evolution.

"These invisible molecular and cellular structures cannot be seen by the naked eye, but can only be observed with the most sophisticated scientific tools, such as X-ray diffraction and nuclear magnetic resonance, or modeled with advanced computers. But if they can be amplified billions of times as in a building, then these molecular structures can be seen, touched and admired. At that large scale, they can also be very educational for people of all ages," Zhang said.

Kulper said the design of the building also arose from the pioneering spirit he discovered among life scientists and biological engineers. "They are always working at the threshold of understanding," Kulper said.

"When I took Shuguang's course, I was thrilled to learn that structural biologists had developed such an amazing language for describing new and complex forms. Also, structural biology is basically concerned with the sort of geometries that architects and designers often work with, though on a completely different scale. It's a very visual field that communicates more through illustration than through symbol," Kulper said.

A meeting of science, architecture

The seeds of Kulper's involvement in the Sichuan University project began in conversations he had with Zhang, a known admirer of architecture, during the year in which he took Zhang's course. Zhang encouraged Kulper both to apply principles of scientific research to his work in architecture -- "Explore the unknowns and navigate the uncharted territories," he urged -- and to spend time in Zhang's laboratory learning about bioengineering.

The next year, Zhang contacted Kulper with the news that he was now the founding advisor of a new research institute at Sichuan University.

Kulper said, "Zhang offered me the opportunity to develop concepts for the building, which, as a biological research building, would give us an opportunity to design for a client that would appreciate details that referenced biological concepts. I started work on sketches immediately once he had given me some basic information regarding the functional requirements of the building as well as photos of the site in Chengdu."

Zhang said he challenged Kulper with incorporating "as many biology motifs as possible" into his design and with using realistic construction materials.

Zhang then sent Kulper to spend three summer months in Beijing with Roy, where they collaborated on a preliminary design for the building with architects at Tsinghua University's Architectural Design and Research Institute. Roy, currently a software engineer at Silicon Valley startup Sharpcast, Inc., designed and programmed "iQuarium," an interactive media installation on fish fluid dynamics, when she was at MIT.

Kulper characterized the collaboration with his Chinese design teammates as a "highly gratifying, very hybridized process."

Together, the international architecture team "developed sketches and models while simultaneously studying cellular structures that had formal similarities to the spaces we were designing. We worked with images of proteins, membranes and organelles alongside photos and textbook images of glazing systems and cantilevers," Kulper said.

On the exterior design of the building, Roy commented, "Bay windows are scattered throughout the surface of the building, just like proteins in a cell membrane. They serve as convenient meeting places attached to both laboratories and offices."

The biology of the building

The final plan calls for a research and laboratory facility with six floors and a crystal-shaped lecture hall with a crystal diffraction pattern ceiling, full of various biology motifs, to be built for about $12 million - more than twice the current cost of a more traditional design in China, yet a small fraction of the cost of building in the United States.

Kulper hopes to visit the construction site in Chengdu in time to catch some of the 2008 Olympics in Beijing, he said.

In the meantime, Zhang has produced a book on the design process for the cell-shaped building. On viewing the renderings of the building, Institute Professor Phillip Sharp commented, "The building is very interesting. I have always wondered what it would be like working within the cell."

Ingemar Ernberg, a tumor biologist from Sweden's Karolinska Institute, not only immediately arranged for a Swedish architect to visit Zhang but also invited Zhang to give a talk to a group of Swedish architects.