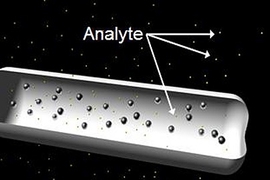 ↓ Download Image
Caption: In this image, nanoparticles tailored to detect a particular molecule, or analyte, are suspended within a device that allows them to be delivered into a patient's body <a onclick="MM_openBrWindow('cancer-chip-a-enlarged.html','','width=509, height=583')">
<span onmouseover="this.className='cursorChange';">Open image gallery</span>
</a>
<noscript> <a href="cancer-chip-a-enlarged.html">
<em>(no JavaScript)</em>
</a>
</noscript>
Credits: Image courtesy / Cima research group 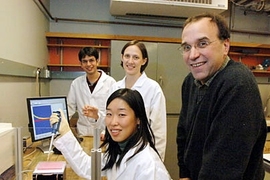 ↓ Download Image
Caption: A team of MIT researchers is working on an implantable chip that can track whether a person is responding to cancer chemotherapy treatment. Standing, from left to right, are graduate student Christophoros Vassiliou, graduate student Karen Daniel and Michael Cima, professor of materials science and engineering. Seated in front is graduate student Grace Kim.
Credits: Photo / Donna Coveney

Caption:
In this image, nanoparticles tailored to detect a particular molecule, or analyte, are suspended within a device that allows them to be delivered into a patient's body <a onclick="MM_openBrWindow('cancer-chip-a-enlarged.html','','width=509, height=583')">
<span onmouseover="this.className='cursorChange';">Open image gallery</span>
</a>
<noscript> <a href="cancer-chip-a-enlarged.html">
<em>(no JavaScript)</em>
</a>
</noscript>
Credits:
Image courtesy / Cima research group

Caption:
A team of MIT researchers is working on an implantable chip that can track whether a person is responding to cancer chemotherapy treatment. Standing, from left to right, are graduate student Christophoros Vassiliou, graduate student Karen Daniel and Michael Cima, professor of materials science and engineering. Seated in front is graduate student Grace Kim.
Credits:
Photo / Donna Coveney

A tiny implant now being developed at MIT could one day help doctors rapidly monitor the growth of tumors and the progress of chemotherapy in cancer patients.

The implant contains nanoparticles that can be designed to test for different substances, including metabolites such as glucose and oxygen that are associated with tumor growth. It can also track the effects of cancer drugs: Once inside a patient, the implant could reveal how much of a certain cancer drug has reached the tumor, helping doctors determine whether a treatment is working in a particular patient.

"You really want to have some sort of rapid measure of whether it's working or not, or whether you should go on to the next (drug)," said Michael Cima, the Sumitomo Electric Industries Professor of Engineering in the Department of Materials Science and Engineering, and the leader of the research team.

Such nanoparticles have been used before, but for the first time, the MIT researchers have encased the nanoparticles in a silicone delivery device, allowing them to remain in patients' bodies for an extended period of time. The device can be implanted directly into a tumor, allowing researchers to get a more direct look at what is happening in the tumor over time.

With blood testing, which is now commonly used to track chemotherapy progress, it's hard to tell if cancer drugs are reaching their intended targets, says Grace Kim, a graduate student in the Harvard-MIT Division of Health Sciences and Technology and one of the researchers working on the implant. That's because the system of blood vessels surrounding tumors is complicated, and you can't trust that drugs present in the blood have also reached the tumor, according to Kim.

The new technique, known as implanted magnetic sensing, makes use of detection nanoparticles composed of iron oxide and coated with a sugar called dextran. Antibodies specific to the target molecules are attached to the surface of the particles. When the target molecules are present, they bind to the particles and cause them to clump together. That clumping can be detected by MRI (magnetic resonance imaging).

The nanoparticles are trapped inside the silicone device, which is sealed off by a porous membrane. The membrane allows molecules smaller than 30 nm to get in, but the detection particles are too big to get out.

The device can be engineered to test for many things at the same time, leading Kim to offer a turkey-based analogy.

"When you're cooking a turkey, you can take the temperature with a thermometer," she said. "But with something like this, instead of just taking the temperature, you can find out about the moisture, the saltiness, and whether there's enough rosemary."

In addition to monitoring the presence of chemotherapy drugs, the device could also be used to check whether a tumor is growing or shrinking, or whether it has spread to other locations, by sensing the amount and location of tumor markers.

The next step for the research group is to start more extensive preclinical testing. They will be looking for a hormone, human chorionic gonadotropin (HCG), that can be considered a marker for cancer because it is produced by tumors but not normally found in healthy individuals (unless they are pregnant).

The researchers are now preparing a paper on the work and have presented their findings at recent meetings of the European Cancer Society and the American Institute of Chemical Engineers.

Other MIT researchers involved in the project are Karen Daniel, a graduate student in chemical engineering, Christophoros Vassiliou, a graduate student in electrical engineering and computer science, and Noel Elman, a postdoctoral associate in the Materials Processing Center. Lee Josephson, an associate professor at the Center for Molecular Imaging Research at Massachusetts General Hospital, is also contributing to the project.

This work is funded by the National Cancer Institute through the MIT-Harvard Center of Cancer Nanotechnology Excellence.

A version of this article appeared in MIT Tech Talk on December 6, 2006 (download PDF).