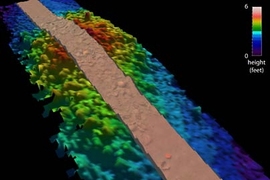 ↓ Download Image
Caption: This image shows a sample of the data collected by the SeaBed autonomous underwater vehicle as it swam over the Chios shipwreck in July 2005. The 3-D color mesh represents a topographic map of the sea floor, created using data collected by multibeam sonar. The brown strip shows the area captured in digital images, which were used to create the photomosaic of the wreck. <a onclick="MM_openBrWindow('arch-mosaic-enlarged.html','','width=509, height=583')">
<span onmouseover="this.className='cursorChange';">Open image gallery</span>
</a>
<noscript> <a href="arch-mosaic-enlarged.html">
<em>(no JavaScript)</em>
</a>
</noscript>
Credits: Image Â© / Chios 2005 Shipwreck Survey -- WHOI, Hellenic Ministry of Culture: Ephorate of Underwater Antiquities, Hellenic Center for Marine Research

Caption:
This image shows a sample of the data collected by the SeaBed autonomous underwater vehicle as it swam over the Chios shipwreck in July 2005. The 3-D color mesh represents a topographic map of the sea floor, created using data collected by multibeam sonar. The brown strip shows the area captured in digital images, which were used to create the photomosaic of the wreck. <a onclick="MM_openBrWindow('arch-mosaic-enlarged.html','','width=509, height=583')">
<span onmouseover="this.className='cursorChange';">Open image gallery</span>
</a>
<noscript> <a href="arch-mosaic-enlarged.html">
<em>(no JavaScript)</em>
</a>
</noscript>
Credits:
Image Â© / Chios 2005 Shipwreck Survey -- WHOI, Hellenic Ministry of Culture: Ephorate of Underwater Antiquities, Hellenic Center for Marine Research

Sometime in the fourth century B.C., a Greek merchant ship sank off Chios and the Oinoussai islands in the eastern Aegean Sea. The wooden vessel may have succumbed to a storm or a fire, or maybe rough weather caused the cargo of 400 ceramic jars filled with wine and olive oil to shift without warning. The ship went down in 60 meters (about 200 feet) of water, where it remained unnoticed for centuries.

The classical-era ship might never have divulged to archaeologists its clues to ancient Greek culture, except for a research team from MIT, the Woods Hole Oceanographic Institute (WHOI), the Greek Ministry of Culture and the Hellenic Centre for Marine Research (HCMR). They used a novel autonomous underwater vehicle (AUV) to make a high-precision photometric survey of the site last July. Using techniques perfected by MIT and WHOI researchers over the past eight years, the robot accomplished in two days what would have taken divers years of effort.

This week the researchers are releasing a few of the photographs showing detailed images of some of the remnants of the ship's cargo lying on the ocean floor, where it's been since about 350 B.C. The researchers took more than 7,000 images, which will eventually be combined into one mosaic of the entire wreck site.

The project marks the beginning of a long-term research project of the MIT/WHOI team collaborating with the Greek Ministry of Culture and HCMR.

The Deep Submergence Laboratory of WHOI has for years been a leader in building submersible robotic vehicles for a variety of underwater environments, including the ARGO vehicle that found the Titanic and the JASON II vehicle that explores the sea floor today. The robotic vehicle used at Chios is an AUV called SeaBed. WHOI scientist Hanumant Singh and his research team designed and built the AUV specifically for imaging the sea floor.

At Chios, Singh and his engineering team programmed SeaBed to run slow, precise tracklines over the shipwreck site, which had been located by a sonar scan performed by the Greek Ministry of Culture in 2004.

The AUV scanned the scattered cargo and created a topographical sonar map while collecting thousands of high-resolution digital images, without ever physically touching the shipwreck. In all, 7,650 images were collected on four dives. WHOI archaeologists and engineers are assembling those images into mosaics that depict the minute features of the shipwreck with unmatched clarity and detail.

The Chios wreck is playing a critical role in exploring how advanced technology can dramatically change the field of underwater archaeology. The long-term project is the brainchild of expedition co-leaders Brendan Foley, a researcher at WHOI who is a 2003 Ph.D. graduate of MIT's Program in Science, Technology and Society (STS), and David Mindell, the Dibner Professor of the History of Engineering and Manufacturing and professor of engineering systems at MIT. Mindell develops high-precision sonar navigation systems that control undersea robots in very deep water to create the world's most accurate three-dimensional maps of the ocean floor. Mindell and Foley founded MIT's DeepArch research group, which has been laying the intellectual, methodological and technical foundations for archaeology in the deep sea for the past eight years.

Robotic technology is the only way to reach deep shipwrecks like the one at Chios, but the systems can also be applied to shallower sites.

"By using this technology, diving archaeologists will be freed from mundane measuring and sketching tasks, and instead can concentrate on the things people do better than robots: excavation and data interpretation," said Singh, an engineering and imaging scientist. "With repeated performances, we'll be able to survey shipwrecks faster and with greater accuracy than ever before." These new techniques produce results very quickly.

As soon as SeaBed surfaced with the first images from the Chios wreck, taken July 7 and 8, 2005, Foley and the Greek archaeologists began interpreting the data.

Much of the true value in cargo ships such as the Chios wreck is the information they provide about the networks that existed among the ancient Greeks and their trading partners. The wreck is "like a buried UPS truck. It provides a wealth of information that helps us figure out networks based on the contents of the truck," said Mindell.

Foley, Mindell, Singh and their collaborators are using the latest technology to create "ways of learning about the past that you couldn't achieve any other way. We're not looking for footnotes any more. We're looking to write new chapters," Foley said. The new research project will last 10 years or more, focusing on uncovering evidence of ancient trade in the Mediterranean, particularly of the Minoan and Mycenaean cultures and their trading partners in the Bronze Age (2500-1200 B.C.).

"This was a home run for us," Mindell said. "There's a lot riding on it." The team will be back in Greece to explore more wreck sites next season.

"This is real research -- slow, serious, scientifically rigorous and painstaking work," Foley said. "It will go in strange directions, produce ambiguous results along the way, and raise a lot of new questions, but we're convinced that in 10 to 15 years, we will change history."

In addition to Foley, Mindell and Singh, the American team for the Chios expedition included Professor Brian Bingham from the Franklin W. Olin College of Engineering; Richard Camilli, Ryan Eustice and Chris Roman from WHOI; and Professor David C. Switzer from Plymouth State University. The Greek science and technical team was led by HCMR geologist Dimitris Sakellariou. The Greek archaeology team was headed by Katerina Delaporta, director of the Ministry of Culture's Ephorate of Underwater Antiquities.

A version of this article appeared in MIT Tech Talk on February 8, 2006 (download PDF).