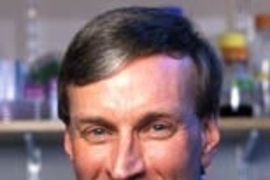 David Page, professor of biology at MIT, was named interim director of the Whitehead Institute for Biomedical Research in December.

"David Page is both a great scientist and a wonderful person," said Alex d'Arbeloff, chair of the Whitehead board of directors and former chair of the MIT Corporation. "We affirm this appointment with the utmost enthusiasm and look forward to working with him."

Page, who is also an Investigator of the Howard Hughes Medical Institute, graduated from Harvard Medical School and the Harvard-MIT Health Sciences and Technology Program in 1984. That same year he came to Whitehead as one of the Institute's first Fellows.

Throughout his career, Page has focused on the genetic basis of differences between human males and females, and particularly on the roles of the X and Y chromosomes. During the past two decades, he and his laboratory have revolutionized scientific understanding of the Y chromosome previously thought to be the wasteland of the human genome. For decades, the Y chromosome was thought to be gradually deteriorating due to its inability to fix genetic damage by swapping genetic material with a mate. In the June 2003 issue of Nature, Page and colleagues at Whitehead and Washington University in St. Louis described a system of self-repair that is unique to the Y chromosome. Page's lab is now focusing on the question of germ cell sex determination in mammals, and on the development of the embryonic ovary.

"Since the doors of this Institute opened two decades ago, the Whitehead has defined excellence in biology," said Page. "My goal as interim director is to build upon the incredible legacy of three superlative directors: David Baltimore, Gerry Fink, and Sue Lindquist. I'm honored by the Whitehead Institute's confidence in me."

Page is the recipient of numerous honors that include the MacArthur Foundation Prize Fellowship (1986), the Amory Prize from the American Academy of Arts and Sciences (1997), and the Curt Stern Award from the American Society of Human Genetics (2003).